Last week I discussed the first of this four part series on Robert Griffin III, the Baylor Spread Offense, the Redskins West Coast Offense, and how they would integrate should RGIII be drafted by the Redskins this April.

Now for Part II: The Baylor Spread Offense. I'll look at some game film of RGIII and see how effectively he ran Baylor's version of the Spread. For part one, click any of these colored words.

NFL Scouts and Pro Analysts have criticized Baylor's offense due to it's simplicity. Griffin has repeatedly opposed this argument, though I can't say that I agree. A large part of the Baylor offense is comprised of WR screens and zone read QB runs. There are also virtually no progressions (RGIII would disagree).

Here is Griffin in a standard Spread formation with two wide left and one right, along with a runningback. This will be one of the Zone Read's that basically comprises the Baylor running game. Griffin will read the 'Will' or weak side linebacker in order to decide whether to hand off or keep the ball. A vast majority of the time he keeps it, as well as this instance. 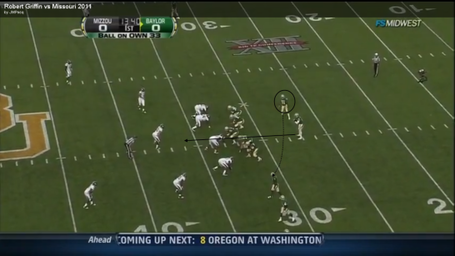 Read more after the jump...

Notice the Will linebacker has chosen to contain. Griffin will keep, exploiting a -very large- hole in the defensive front. This is one of the plays the Denver Broncos have incorporated for Tim Tebow and both (RGIII/Tebow) are very adept with it. 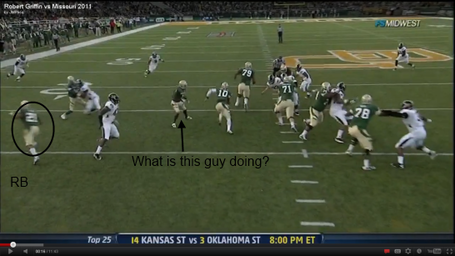 Unfortunately, #71 doesn't effectively stay his man, and the defender is able to get his fingertips on Griffins shoes. 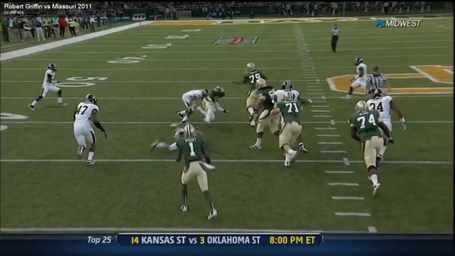 Let's talk poise in the pocket. Here I've only got one shot, but it tells the whole story. Actually, it tells two stories. The first is Griffin's relative fearlessness inside the pocket -which can be good AND bad depending on how you look at it- the second being his inability to feel backside pressure. I will give RGIII the benefit of the doubt and say that his blind-side isn't all that effective in picking up the blitz. Needless to say, he gets absolutely hammered, but completes the pass for a first down. Good looking footwork, too. 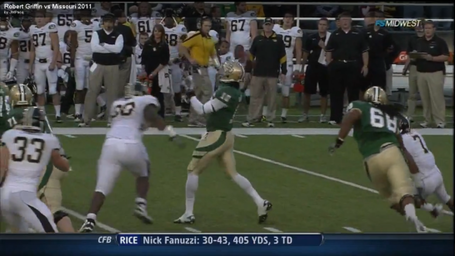 This will be a testament to Griffin's athletic ability. Although I feel that he has some trouble feeling backside pressure, when he does recognize it he has a few options for getting away... Two to be exact. On this play vs. Missouri, the defender beats the Baylor blind-side tackle with a spin move. 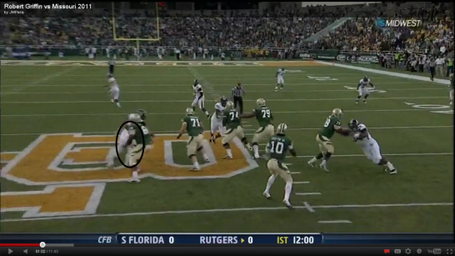 90% of the quarterbacks in the NFL are toast right here. Not RGIII. He effectively avoids the backside pressure with a subtle dip of his shoulder and some quick legwork. He'll roll out to the right, all while keeping his head and eyes downfield looking for the play. Many see Griffin and automatically think of him as a 'run-first' mobile QB. I disagree, after watching a lot of film on him over the past couple of days, as well as what I saw during the season, I'm inclined to believe the opposite. 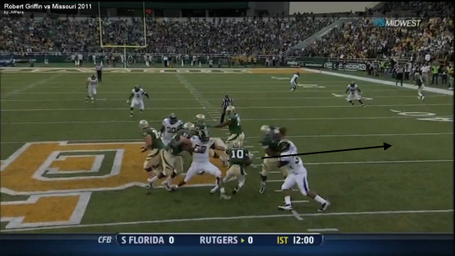 Although I wasn't able to get a clear enough shot of the completion, Kendall Wright is coming across the middle on a slant. Griffin could easily have kicked it into overdrive and picked up the same yardage with his legs. 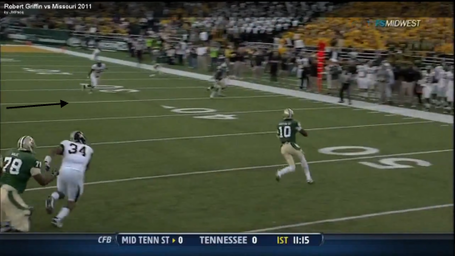 Last one. Griffin has great legs - As Ken would say - but what has really sold me is his ability to complete the long-ball. In this next play versus Texas, Griffin is again in the Baylor Spread. As a reminder, the spread is designed to do exactly what it sounds like. Spread the defense. Here, the scheme works perfectly. Wright will go deep on a post, Griffin will fake the handdoff and assess his options downfield. 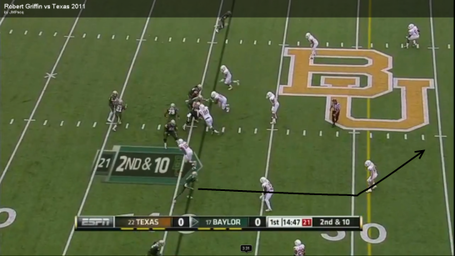 Griffin feels the pressure from the right, and takes a few steps to the left getting out of harms way. He has his eyes downfield on his No. 1, but he does have a checkdown in the flat. 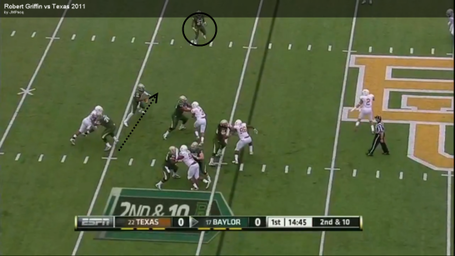 Wright is able to force the under defender to cheat inside, allowing separation between the two of them (defenders). Once that has happened, Wright has already done his damage. You can see how well he is able to lead his receivers. The ball has already left his hand, and will be caught at the 15. That's a cannon. 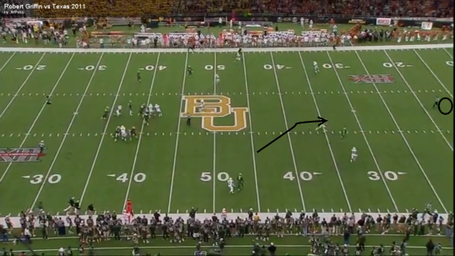 Perfectly placed ball for a touchdown. 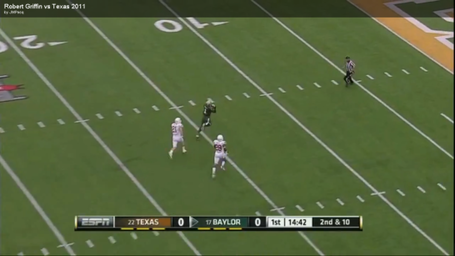 Robert Griffin's athletic ability is unmeasurable other than his lightning 4.41 40-time. Griffin held a vital role in Baylor's success this past NCAA season. Although he had a very strong season, well deserving the hype surrounding him (to some extent), there is still one question that is buried in the back of my mind:

Is there a way for RGIII to incorporate his talents into the Redskins' West Coast Offense?

Check in next week where I'll try and answer just that with a look at the Redskins West Coast offense.