Share All sharing options for: Draft Profile: The Stanford Broom

In the midst of free agency and almost certain fate of drafting Robert Griffin III we've lost touch a bit with our draft profiles. Personally I blames Ken for this, but we all take responsibility. We've gone over a lot of prospects here at Hogs Haven but one yesterday really caught my eye during the Stanford pro day...the broom. 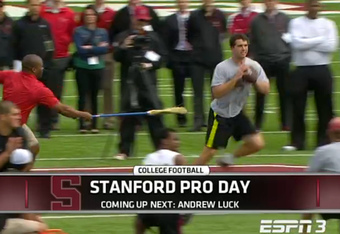 Pros: The broom really came across as a high motor guy and I wouldn't be surprised to see him climb up draft boards across the country. He was really strong coming around the edge and was constantly harassing Andrew Luck. The biggest advantage of the broom is his versatility, basically the broom can line up at any defensive position and he's a great presence in the locker room.

Cons: There's not much bad you can say about the broom to be honest. He's very coachable and a fan favorite. The one problem I did have was that he doesn't possess prototypical size to be a pass rusher in this league. But I think the broom's heart can make up for where his body lacks.

Draft Stock: Simply put, the broom is best kept secret in this year's draft. I think we can sweep away the competition and likely grab this guy with one of our fourth round draft picks.