What Will Pierre Garçon Bring To The Redskins?

Share All sharing options for: What Will Pierre Garçon Bring To The Redskins?

One of the biggest needs for the Washington Redskins to fill was at wide receiver. Many people (including myself) believed they were all set to make a run at Vincent Jackson, as he was the only true number one receiver on the open market. But instead the Redskins went after Pierre Garçon, giving him a five-year, $42.5million deal, with various reports speculating the guaranteed money is anywhere from $10million to $20.5million. Whatever the guaranteed money actually is, it's a lot to spend on a second tier receiver, especially after the big cap hit the Redskins received from the NFL.

With all this money being invested in Garçon, I wanted to see the reasoning behind it. After all, Garçon isn't the typical 6'5", 225lbs number one receiver, he's only 6', 210lbs. So what does he offer the Redskins that makes him such a valuable an asset?

When you watch Garçon, you instantly notice his deep threat ability. If a team breaks down in coverage, Garçon is going to be the man to take advantage of it. 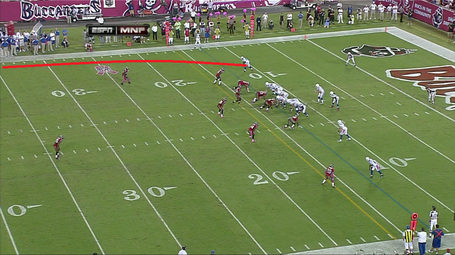 Here, Garçon is running a deep vertical route, also known as a 'go' or 'nine' route. 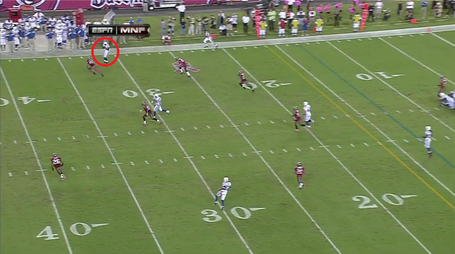 The Buccaneer defenders leave him to run free down the sideline as they appear to missed an assignment. Cornerback Aqib Talib comes across to try and prevent the big play. 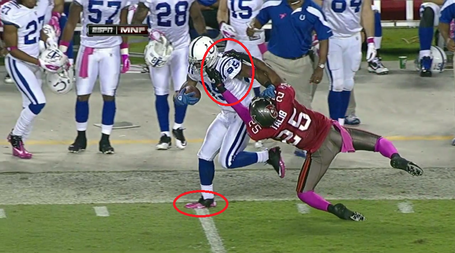 Talib attempts to tackle high, Garçon manages to keep his feet in play and shrugs off the attempted tackle. He then out-runs everyone and takes it all the way for an 87 yard touchdown.

One of the other big strengths of Garçon is his ability to get extra yards after the catch. Several Redskins beat reporters discussed this when he signed last week, but here's some visual evidence of it. 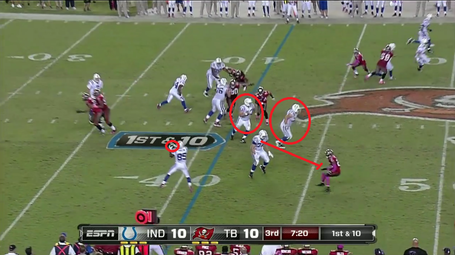 The Colts run a bubble screen, Garçon catches the ball behind the line of scrimmage while three offensive lineman get out in space. 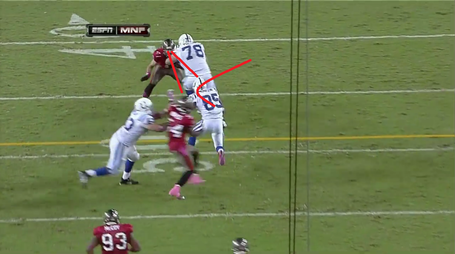 Once Garçon starts running up-field, he is confronted with the first defender that could tackle him. He actually helps the offensive lineman to block him. The defender is watching Garçon, who head fakes that he's cutting inside. The defender then positions himself inside. 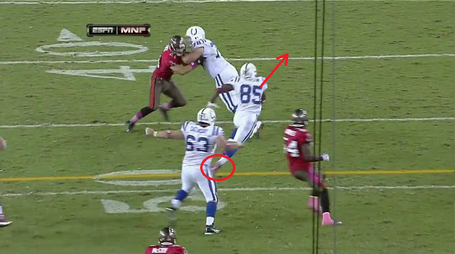 This allows the lineman to block down inside and create room to the sideline. Garçon then cuts outside and runs past him. 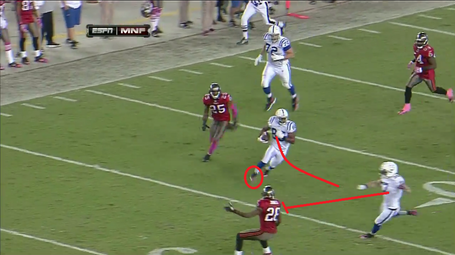 Garçon once again uses his down-field blockers effectively. He encounters another defender who is in a position to make a play, but Garçon cuts back inside behind his blocker, who again cuts off the defender as Garçon runs past. 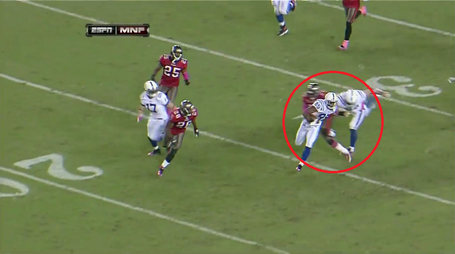 Garçon then shrugs off a tackle attempt, with a little help from another receiver coming in to block. 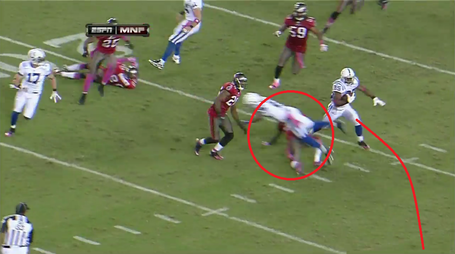 Reggie Wayne then comes in and throws his body at Ronde Barber. Garçon doesn't miss a beat and side-steps around the traffic and then sprints to the end zone for a 59 yard touchdown. Clearly, Garçon has tremendous open field vision and awareness.

However, the other thing that strikes you as you watch Garçon is his drops. He does have some issues dropping the ball. I don't think it is a fundamental issue, because as you'll see later on, he can pull in some spectacular catches. Rather, I think it's an issue of focus. 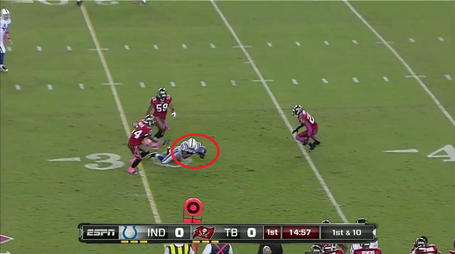 Here we have the first play of the game against the Buccaneers. It was a simple comeback route which he had to dive to get to the ball. As he goes down to the ground, he looks to have secured the ball. 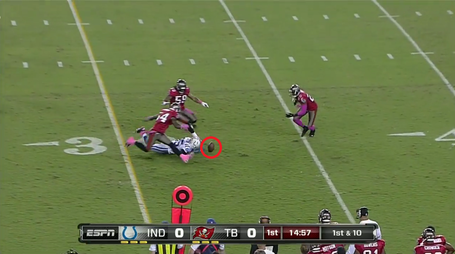 But as his elbows hit the ground, the ball comes out.

Here's another example from the Chiefs game. 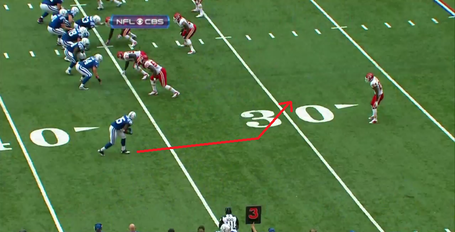 Here we have another simple route, this time Garçon is running a slant. 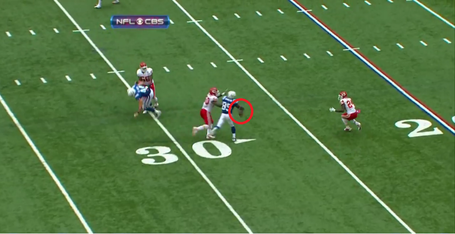 A linebacker drops back into the passing lane, but the ball comes through to Garçon cleanly. Garçon drops it. I think I would put this down to him either not expecting it to come through to him, or that he only saw it late because the linebacker had blocked his vision. But whatever the reason, the ball was dropped.

But as I said earlier, he does make some pretty spectacular catches. 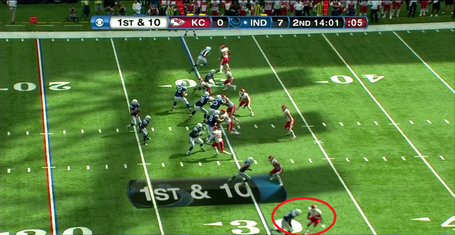 Here we are against the Chiefs again. Brandon Flowers, who is a solid corner, is in press coverage. But Flowers fails to lay a hand on Garçon, allowing him to run his route freely. 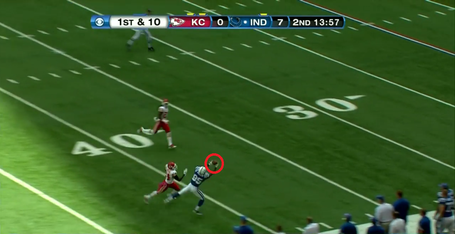 Garçon dives and manages to pull in the catch, despite the ball being over-thrown. He lands in-bounds before Flowers tags him down.

Then we move on to the Patriots game, here we have another deep route againsy Devin McCourty. 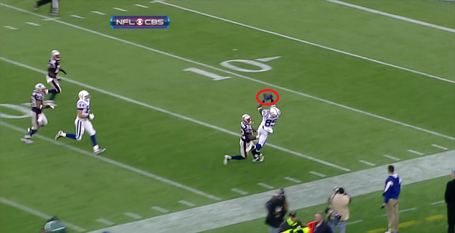 He turns his head, locates the ball and goes up and grabs it before McCourty even has a chance to attempt to break up the pass. 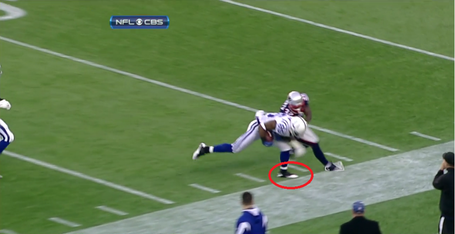 Garçon then manages to keep his landing foot in play while being pushed out of bounds. 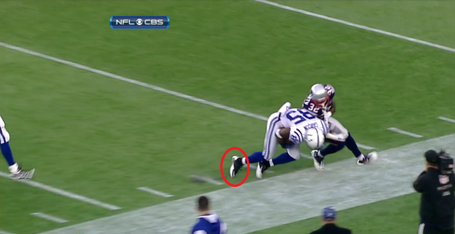 On top of that, he has the awareness to tap his trailing foot and confirm it as a completed catch for a 40 yard gain.

The very next play, they go after McCourty again. Garçon runs a fade route into the end zone. 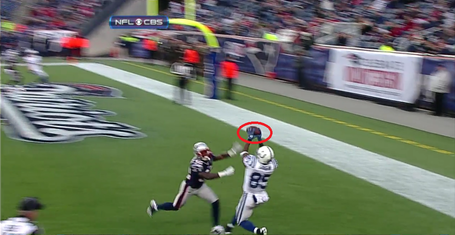 Garçon does a fantastic job controlling his body and spinning in air to adjust to the throw. He brings in the pass and taps both feet down for a 12 yard touchdown.

But if those catches weren't spectacular enough for you, how about this one against the Redskins in 2010?

To wrap up, I think Garçon's role with the Redskins is to be a big play, deep threat receiver. I expect to see him running plenty of deep patterns, and he could be deadly coming off a play-action bootleg from Robert Griffin III. The Redskins would also be wise to try their best to get him the ball in space, because as we saw, that is when he's at his most effective.