Don't Expect RG3 To Be Driving a Bentley

Share All sharing options for: Don't Expect RG3 To Be Driving a Bentley

Robert Griffin Jr, aka RG2, aka Robert Griffin III's dad, recently spoke about having dinner with Dan Snyder on Tuesday night. It's well-known RG3's parents were both seargants in the U.S. Army, and it's quite fun to see their parental influences are still in effect:

"The owner, he had a lot of concerns," Griffin Jr. said. "Ya know, a young kid coming into the league. He asked us what kind of vehicle that Robert drives. I said, ‘Chrysler Pacifica - the whole time he was at Baylor.' [Snyder] said, ‘Good, because guys in our parking lot drive Bentleys.'

"I said, ‘Robert ain't gonna be driving no Bentley. If he does, you call me.'"

What a great line. The first thing I thought of next is what the hell is a Chrysler Pacifica?? After the jump I included a picture...

(Knowing Redskins fans' obsession for their stars, I expect to see a few burgundy Pacificas at Fedex on Sundays. Seriously. Not really. Maybe) 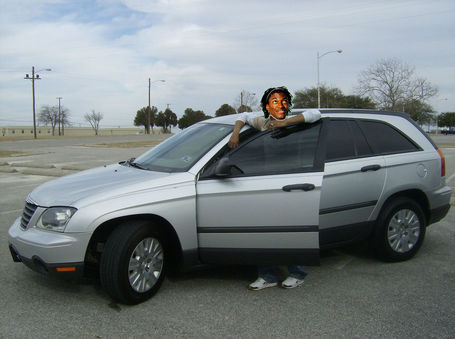