Tale of the Tape: Ryan Tannehill vs SMU.

Share All sharing options for: Tale of the Tape: Ryan Tannehill vs SMU.

Time for the Redskins quarterback conversation to continue. In the scenario that that Robert Griffin III is unavailable to the Redskins, I've been looking at the other quarterback prospects. Earlier in the week, I looked at Nick Foles' footwork, suggesting that was holding him back from being the third best quarterback. Today I'm going to look at Ryan Tannehill. Tannehill was widely regarded as the third best quarterback in this draft until he broke his foot. This caused him to missed the Senior Bowl (where he would have been coached by the Redskins staff), and potentially other pre-draft workouts such as the combine and pro day (although it has yet to be determined what he will miss). If he does miss the combine, teams will have to rely on purely his tape to evaluate his ability on the field. With that being said, I felt like I should re-watch all the Tannehill footage I can find and break down each game individually, starting with the first game of the season against SMU. 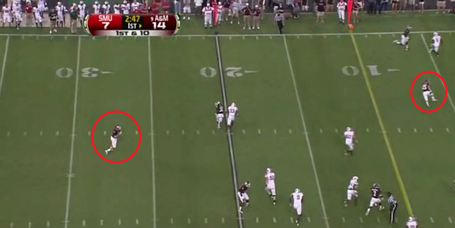 On the first play of note, Tannehill starts from under center. He fakes the hand-off and rolls outside of the pocket to his left. He identifies his target, receiver Ryan Swope, as he is coming out of his cut. 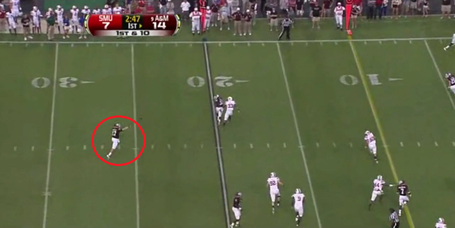 He makes a very awkward throw looks very easy, but in reality, throwing on the run while rolling to your left is far from it. 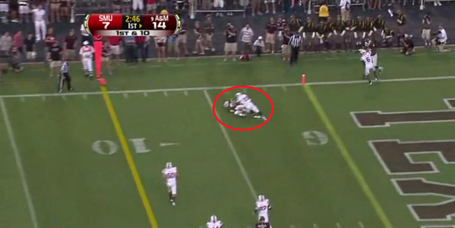 He managed to hit Swope on the out route (albeit Swope had to dive to catch it) and gets a first down.

Tannehill's mobility is a huge plus and will help him extend plays under duress of an NFL pass rush. Next we have a timing throw. 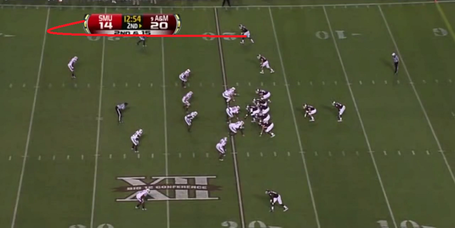 This is a simple comeback route. The concept for Tannehill is a five step drops, hitch, and throw. The key is to get the timing right with the receiver. 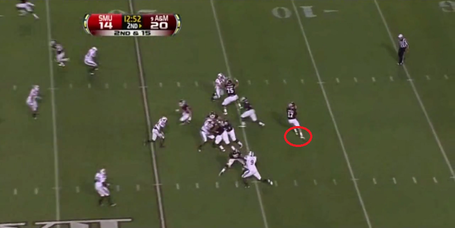 Tannehill gets to the top of his drop, hitches to get in sync with his receivers timing and to get his feet set. 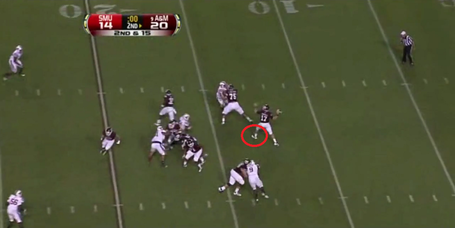 He correctly steps into his throw and gets the ball out on time. 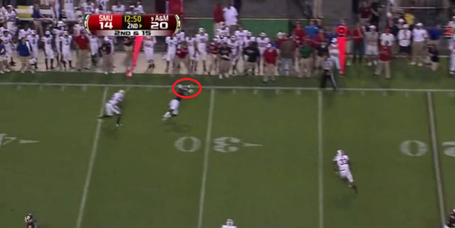 The receiver makes the catch out of the break. The only real criticism I have of Tannehill on this throw is the ball placement (as with the last throw). He doesn't give the receiver a chance to make any yards after the initial catch. But I like what I've seen so far from Tannehill in this game. 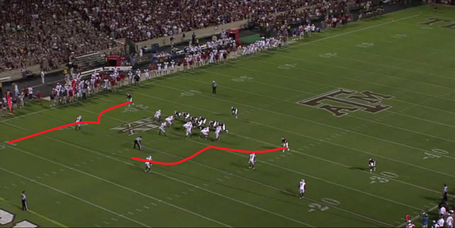 On this play, the receiver at the top of the screen (I believe its Jeff Fuller) is running a slugo route (a slant and go) as the primary target. We also have Swope running a crossing pattern from the slot. 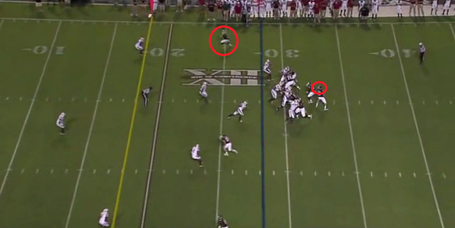 Tannehill checks his first read, but the corner doesn't bite on the slugo route. 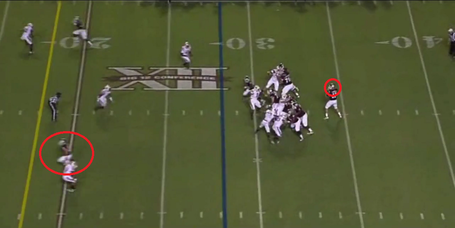 He then checks his second target, Swope. But Swope has yet to make his cut. Tannehill's internal clock goes off, so he breaks the pocket and rolls to his right, keeping his eyes down-field. 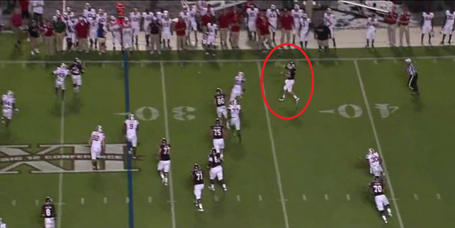 Tannehill gives his receivers as much time as possible to freelance and get open before he spots Swope near the end zone. Tannehill once again manages to make an awkward throw look easy. He also displays his arm strength, this ball travels the best part of 35 yards in the air when throwing on the run and off-balance. 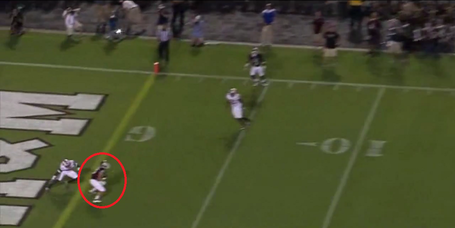 He hits Swope right in the gut, who makes the easy reception and turns into the end zone for a touchdown.

As you probably have heard by now, Tannehill is a former wide receiver who has very little experience playing quarterback. Yet, he is advanced enough to look off players. 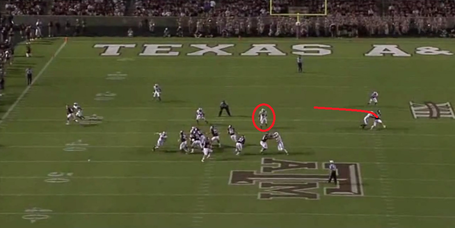 Swope is about to cut inside and come across the middle. There is a linebacker sat in a zone in the middle of the field. 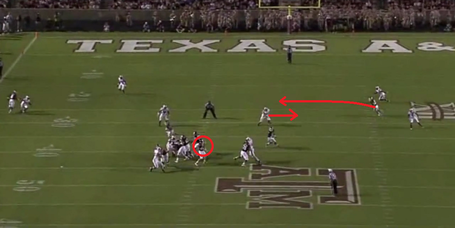 The linebacker is watching Tannehill's eyes, so Tannehill pump fakes to draw the linebacker one way, and then throws in behind him to Swope.

The ball is a bit low, but it's placed where the safety coming over the top can't get a hand on it. Swope makes the catch and its another good play for Tannehill.

The final play from the game I took note of was similar to the last one. It appears as though Tannehill looks off the safety, although it could just be that he checks the route to his right, only Ryan will know that for sure. 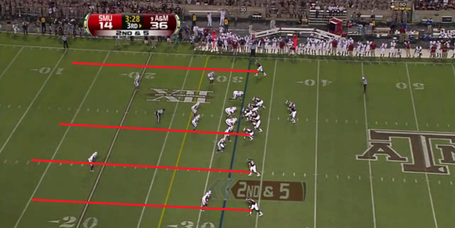 The play is called for four go routes, or four verticals as some might call it. 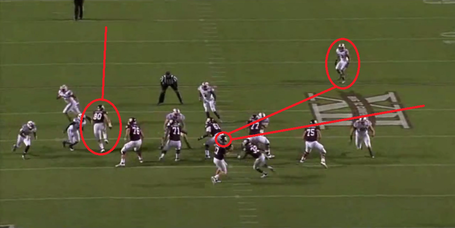 Tannehill either checks his first read, or is looking off the safety. Either way, the safety ends up biting on it and starts to cheat to that route. 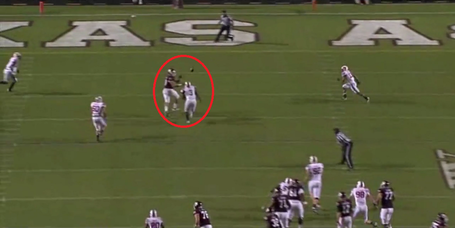 Tannehill then puts the perfect touch on a throw to put it over the top of the linebacker. The tight end makes the catch and walks into the end zone for a touchdown.

Overall, Tannehill have a very efficient performance against SMU. he only had five passes fall incomplete, but was otherwise generally faultless. Hopefully this gave you a little bit of insight on Tannehill's potential, but remeber it was against SMU who are hardly the toughest competition. Check back later for Tannehill against Oklahoma state, where things weren't quite so easy.