It's clear to anyone that wide receiver is a major need for the Redskins. Juron Criner measured in at 6'2" 224 lbs and had the largest hands at the combine at ten and half inches. Janoris Jenkins singled Juron Criner out as the hardest receiver to cover during Senior Bowl practices. Of course, the Redskins got a first-hand look at Criner since he was on Shanahan's South squad. I went right into my normal questions:

What did you get out of your week at the Senior Bowl with the Shanahans and Ike Hilliard?

"The biggest thing with their staff was route depth. That was something they keyed in a lot. And blocking, they taught that a lot. That was two of the biggest things I tuned into and practiced hard."

His biggest strength at wide receiver:

"I would say my body control. I have a bit of basketball history, so I'd say that gives me an edge with timing jump balls and hand-eye coordination with tracking down the deep ball. So I'd say that's my biggest asset."

On what he needs to improve...

"I'd say anything at the line of scrimmage. Better and more releases, better hand combat, working more against man coverage. Due to our scheme, we didn't really get to see much man defenses, worked against more zones and finding a window, things like that. So anything that can help me work better at man coverage."

With the amount of quality players in this draft, I'm really hoping now the Redskins trade back. 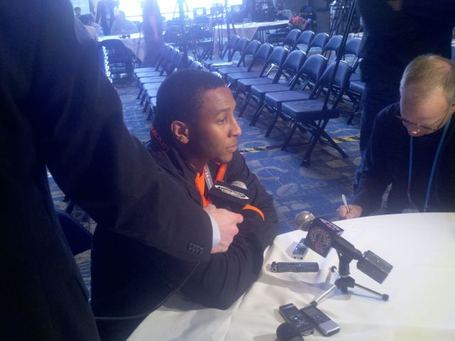