Baylor RB Terrance Ganaway on Senior Bowl with the Shanahans

Share All sharing options for: Baylor RB Terrance Ganaway on Senior Bowl with the Shanahans

I really should be titling these posts: "Keeping up with the Shanahans."

Next up is running back, Terrance Ganaway, who measured in at 5'11" 239 lbs and was another RB on the South squad with the Shanahans at the Senior Bowl. Via the Baylor website, big, tough back specializes in short-yardage situations... Has squatted 600 pounds and benched 395 pounds... Two-time Dean's List and three-time Big 12 Commissioner's Honor Roll selection.

Talk about your week at the Senior Bowl with Mike Shanahan.

It was a great experience. I've always admired Mike, I mean Coach Shanahan (big mile) when he was with the Broncos. Terrell Davis. I know he likes big running backs, so it was great that I had the opportunity to be familiar with him.

What did you learn coming out of that week that you didn't know going in?

Terminology. We call one play with one word and everyone knows what to do. In the NFL, it's about eight words so terminology was a big thing. Reading a man, a defensive end, instead of reading blocks was a little bit different, a little bit challenging for me at the Senior Bowl. We're atheletes, born to adjust.

What feedback did (RB Coach) Bobby T(urner) give you?

Ha. Bobby T. Play hard. We're not there on a fluke. Go out there and have fun.

Ganaway said he needs to work on his pass protection. "QBs are the guys that get paid most, we have to protect them."

A reporter asked about his performance in the bowl game, 200 yards and 5 Tds...

The Oline was amazing. My only job was not to hit my head on the goal post.

What a great line. 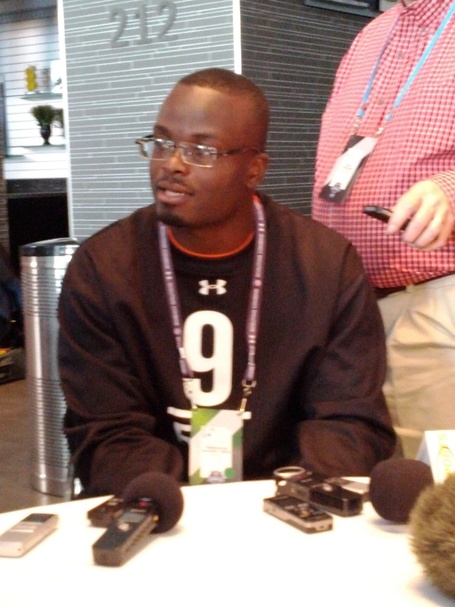