Tale of the Tape: Coby Fleener vs Notre Dame

Share All sharing options for: Tale of the Tape: Coby Fleener vs Notre Dame

The Washington Redskins may appear to be set at tight end on the face of things. But Fred Davis is an unrestricted free agent. Now reports are he'll be back, but what if we decide that the drugs violation is too risky? Can we really rely on Chris Cooley, a guy who's missed a lot of football the last two seasons (don't get me wrong, I love the guy, but I'm not sure you can rely on him... sorry Ken). Jermichael Finley is off the market now, leaving the free agent class a little barren. So then the only option would be to look to the draft. Stanford tight end Coby Fleener is believed to be one of the top tight ends in this class. I've seen people who have him as a third round talent, some people have him in the second and a few have him creeping into the late first round. With tight ends becoming more and more involved in the passing game I thought I'd take a look.

Fleener's stat line from this game: four receptions for 97 yards and two touchdowns. 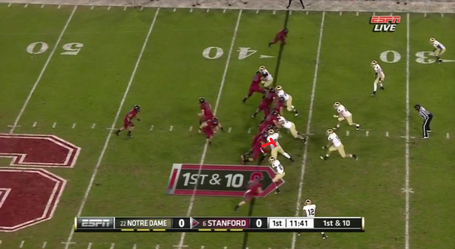 A tight end's first job is run blocking. The best tight ends in this league can run block as well as run routes and catch the ball. On this play, Fleener helps the right tackle block the defensive end. 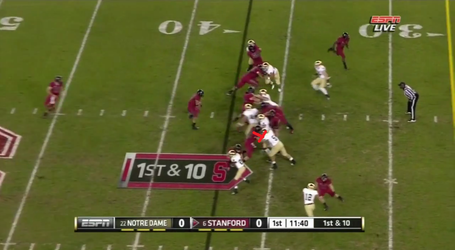 Then the linebacker comes down to make the tackle. Fleener peels off the combination block on the defensive end and occupies the linebacker to stop him making a play. I like that he was aware enough to see the extra defender and have the ability to pick him up.

On this next play, Fleener gets himself in a great position to make the block but doesn't take advantage of it. 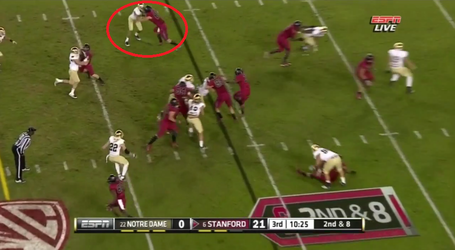 He gets himself low, under the pad level of the defender, and he angles him to the outside. He should be able to drive him backwards from this position. 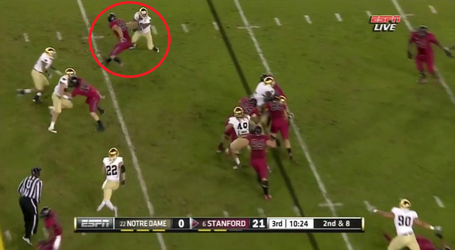 But he fails to get a firm grip on the defender, who manages to slip out of the attempted block and is in a position to make a play. In the end it doesn't matter because the back was brought down before he got to that side, but it's something Fleener will have to work on. His hand positioning needs to be inside on the defenders chest.

The next two plays both show Fleener's awareness and football intelligence. This first play saves a potentialAndrew Luck interception. 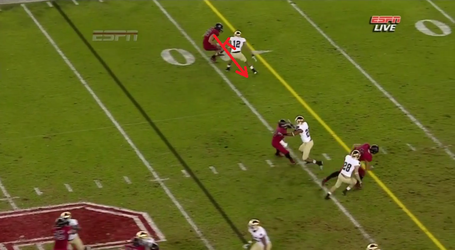 Here Fleener is lined up out wide. The corner plays complete inside leverage on him, but Fleener is running a quick in route. 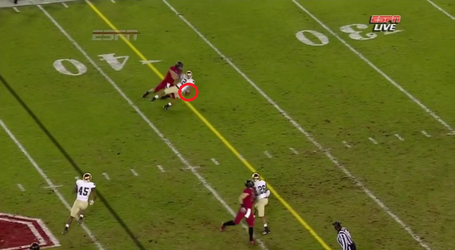 Luck throws the ball anticipating the cut inside, but the corner has the inside position. Fleener basically tackles the corner down to stop him coming away with the interception. Bad throw from Luck but a smart play from Fleener to cover it up.

Then on this next play, Luck attempts a screen pass which gets knocked around until it's eventually intercepted. 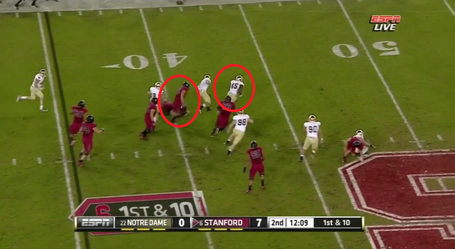 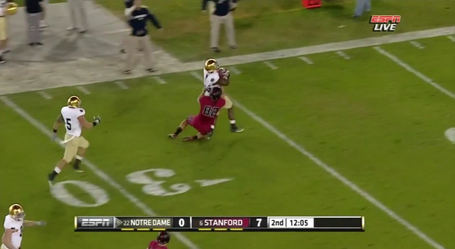 Fleener shows great effort to chase him down and save the touchdown. Notice how no other Stanford player is in the picture. If Fleener hadn't made his play, nobody else would have.

But enough of that, let's move onto what Fleener will be paid for most in the NFL, creating miss-matches and catching the ball. Fleener is listed at 6'6", 244lbs, which isn't too far off Rob Gronkowski measurements. 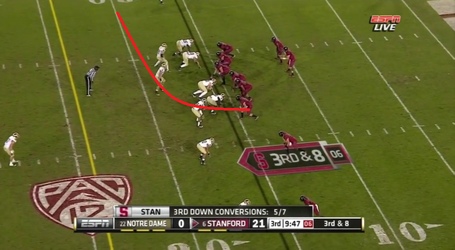 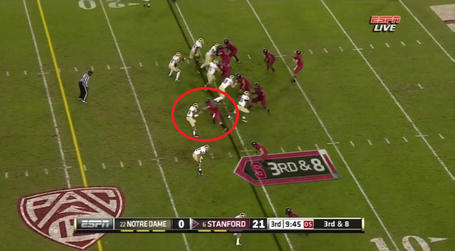 The defender attempts to disrupt the route, but can't get a hand on him, Fleener keeps him at arms length. 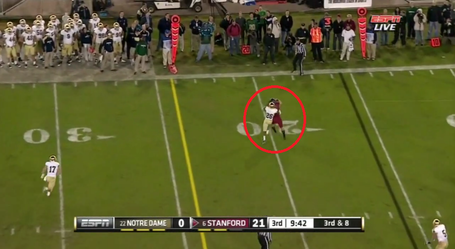 Fleener makes the catch and the defender jumps on him to try and bring him down. 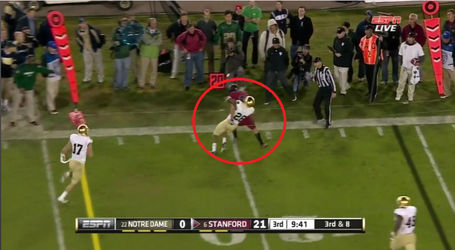 Fleener fights to stay on his feet and attempts to gain any extra yards that he can. He ends up going out of bounds, but you have to like that one defender couldn't bring him down. 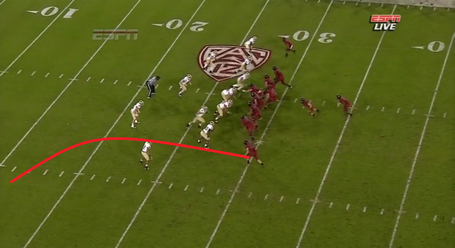 Stanford are in what looks like a run formation. But they actually run a play-action pass to Fleener, who is running a corner route. 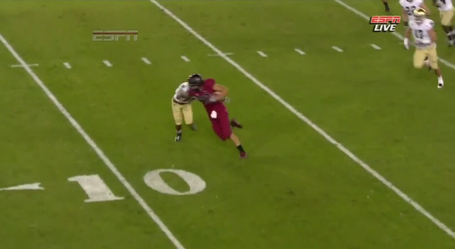 He makes the catch easily and the defender makes contact at around the 13 yard line. 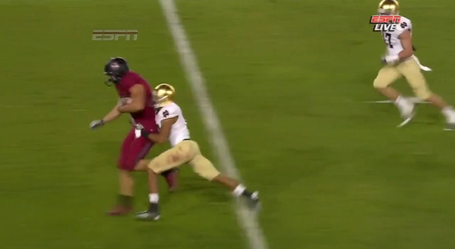 But as we saw earlier, Fleener is a big guy and hard to bring down on your own. 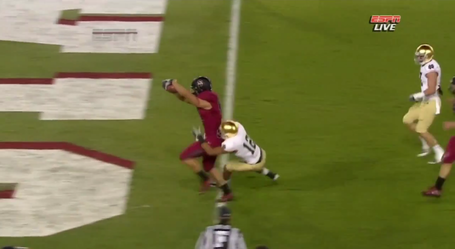 Fleener runs a good ten yards into the end zone with the defender hanging off the back of him. As a Redskins fan, this sadly reminds me of Gronkowski running free after two Redskins defensive backs failed in a joint effort to bring him down...

The last play I'll show you is his second touchdown. 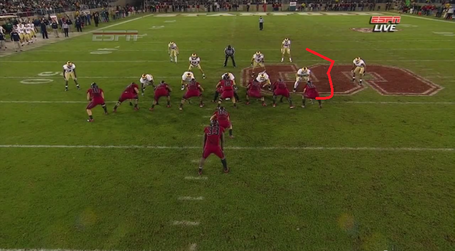 Here he's running a corner post route. Where he'll fake running to the corner before cutting back inside towards the post. 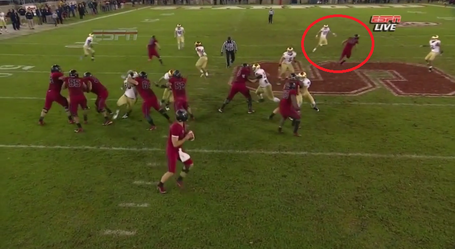 I like how he fakes the corner with his head and shoulders to draw the defender outside and help create more space when he cuts back inside. 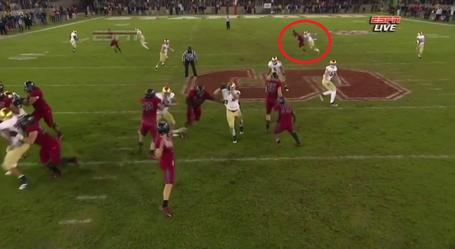 Fleener cuts inside and crosses the safety's face. Luck delivers the ball. 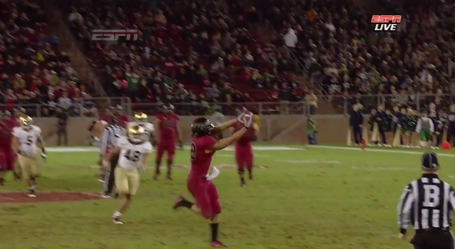 Fleener makes a good hands catch and runs away from the other safety into the end zone for another touchdown.

I like Fleener's potential. His size and athleticism should create big mis-matches in the NFL. Corners and safety's will have trouble tackling him, while linebackers will have trouble covering him. What do you think about Fleener? Is he just a product of Andrew Luck? What round should he be drafted in?