Well, this is something I didn't expect to hear. SI.com columnist, Don Banks, snuck this tidbit in his latest mock draft:

Here's an interesting theory I heard recently that makes some sense: Mike Shanahan loves Oklahoma State QB Brandon Weeden, who he coached in the Senior Bowl, and might try to trade down into the 20s of the first round to take him. Weeden is 28 and that scares a lot of teams, but he's mature and ready to play in the NFL right away, and the Redskins don't have time to wait around for someone to develop.

I just spent some time re-reading the Senior Bowl reviews, and this rumor seems to have some validty:

From Steve Shoup: Weeden is really separating himself from the rest of the quarterbacks down in Mobile. In addition to showing good velocity and accuracy with his throws, he stands out due to his maturity as well. He appears to be communicating the best with his receivers and backs, making sure they lineup properly and acknowledging them when they make great catches. Just really looks to be a leader on the field.

From Mocking the Draft's profile (just four days ago):

So, this really is an interesting nugget since it goes against what we heard about the Redskins not really liking any of the QBs, which prompted all the tradeup scenarios. Of course, Weeden didn't back that hype up throwing 5-of-9 with 56 yards and two interceptions in the Senior Bowl. I couldn't help but laugh in MTD's draft review that all he needs is help with "footwork mechanics." I'm getting McNabb flashbacks nightmares.

Weeden will be 29 in October. As long as Weeden scores a 26 on the Wonderlic, he'll pass the 26-27-60 rule, which has been very good in narrowing successful NFL QBs (26 Wonderlic, 27 games started, 60+% career completion percentage). Andy Dalton being the most recent.

This scenario makes sense if Redskins can't trade up for RG3. As Bruce Allen said, the Redskins have a plan. I could be wrong about this report/rumor, but I'm guessing this is a Mike and Kyle Shanahan smoke screen: 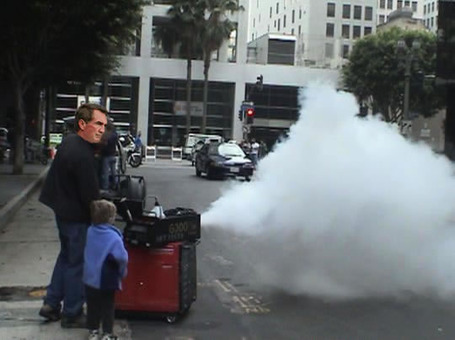 (I really just needed a reason to post this picture).