Tale of the Tape: Justin Blackmon vs Stanford

Share All sharing options for: Tale of the Tape: Justin Blackmon vs Stanford

The Washington Redskins have questions that need to be answered at wide receiver. The general believe is that the Redskins will go down the free agent route to solve this problem, but if they can't land the guy they want, they might have to look to the draft. Justin Blackmon is widely considered the top wide receiver in this years draft class. He had an brilliant season, putting up 121 receptions for 1522 yards and 18 touchdowns. Amazingly, his stats actually regressed from his 2010 season where he caught 111 passes for 1782 yards and 20 touchdowns.

Blackmon looks destined to be selected in the top ten, or quite possibly even in the top five picks of the draft in April. Now I personally don't believe he should be a top five or top ten pick. This isn't to say he's a great talent, but I don't believe a wide receiver should be taken in the top five unless they have the complete package at wide receiver. If I'm taking a receiver in the top five, I want a guy that has the potential to be special a la Larry Fitzgerald or Calvin Johnson; a guy that can out jump a defender to go up and get the ball or can just as easily run past his defender. Justin Blackmon doesn't posses elite speed (projected 4.5 40 time) or the height (Blackmon is 6'1") to out-jump everyone he comes up against.

Again, this isn't to say he can't be a great receiver, just that I'm not sure he's worthy of a top five or top ten pick. Lets have a look how he played in the Fiesta Bowl. 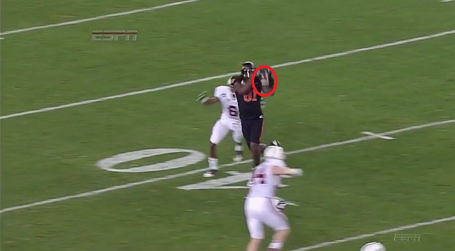 Blackmon runs a quick inside route. What I like about this play is that he shields the ball from the defender with his body and then catches the ball with his hands. 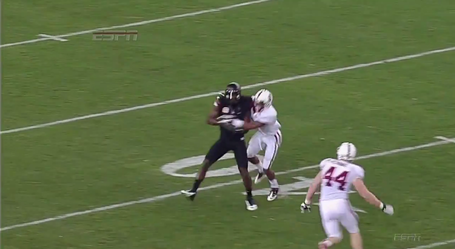 He secures the ball despite the attempt from the defender to knock it loose. He then uses his advantageous body position to shrug off the defender and break into the open field. He runs away from the defense and takes it all the way for a touchdown. 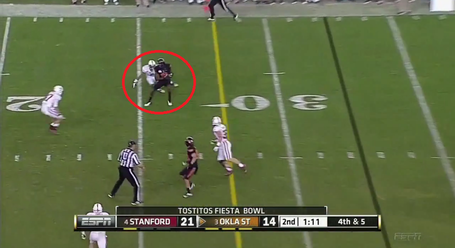 Like the last play, he positions himself so that his body shields the ball from the defender while he secures the catch. 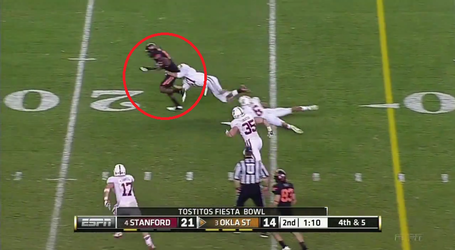 He manages to break the initial tackle attempt before the second defender gets an arm wrapped around him. 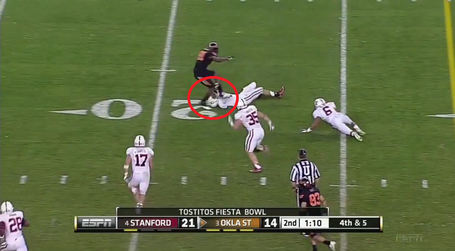 Blackmon gets turned around, but somehow manages to keep his balance and stay on his feet. He once again breaks free and gets an extra ten yards before he's brought down.

That catch put them in the red zone, where Blackmon saw double coverage. 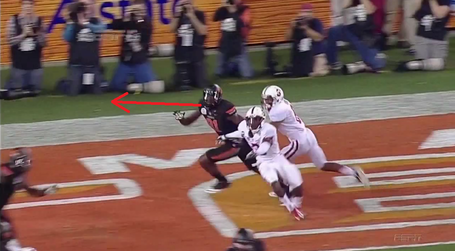 Blackmon runs in between the two defenders and manages to gain a bit of separation coming out of his break. 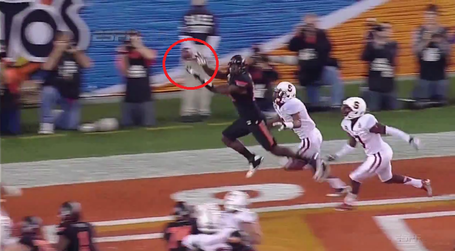 Quarterback Brandon Weeden throws a very catchable ball. I believe Blackmon goes at the ball with his hands the wrong way around. Receivers will have a way they prefer to catch the ball, but from my perspective, I feel that he should have his left hand on top and his right hand supporting underneath. That way the nose of the ball would be caught between thumb and fore finger while the rest of the hand naturally wraps round the ball. The way Blackmon attempts to catch this pass means he has to pull the ball into his body to catch it. 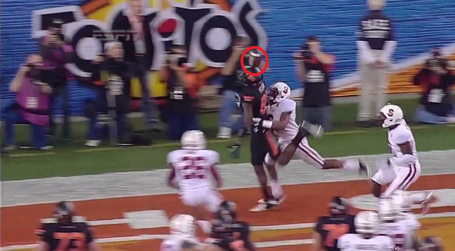 The defender manages to disrupt the process of Blackmon bringing the ball back into his body and the ball comes loose. Luckily for Blackmon, the drop didn't have an impact on the outcome of the game.

Later in the game, Blackmon showed how well he can run routes to manipulate the defense and get himself open. 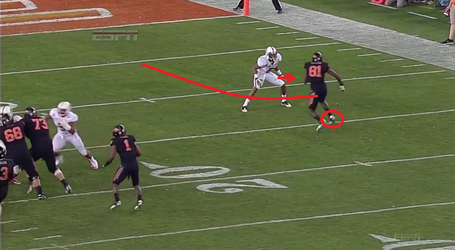 Blackmon takes a dummy step to the outside which gets the corner to shift his weight in that directions. As soon as this happens, Blackmon cuts back inside and runs past him. 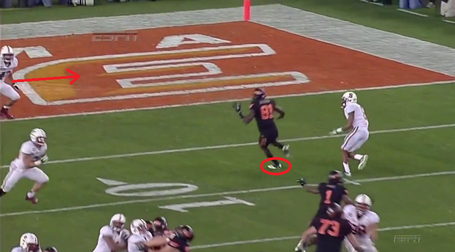 Having easily gotten past the corner, the safety is forced to come over the top to help cover. Blackmon plants his foot in the ground to cut back inside. 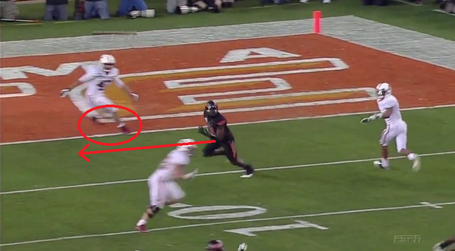 Blackmon cuts back against the momentum of the safety. You can see as Blackmon comes back across the middle, the safeties feet get crossed as he attempts to stop and change direction. 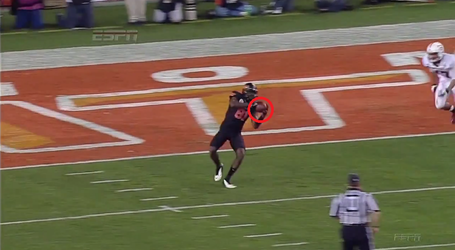 Blackmon makes a good adjustment to come back to the ball as it's thrown slightly behind him. He catches it with his hands instead of with his body and has lots of space and time to turn and run into the end zone for a touchdown.

This last play shows Blackmon's ability to gain more yards after the catch. 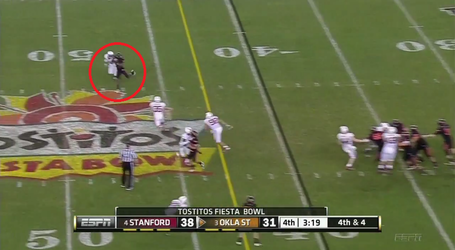 Blackmon runs a slant route and gets in front of the defender. Like he did on the dropped touchdown pass, he gets his hands the wrong way around, but this time he manages to catch the ball. 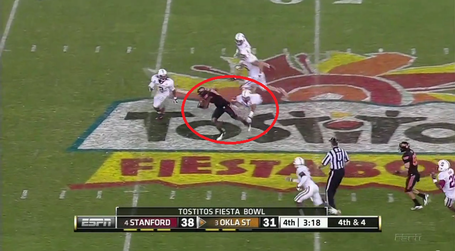 He breaks the arm tackle of the initial defender, managing to keep his balance before the next defender can get to him. 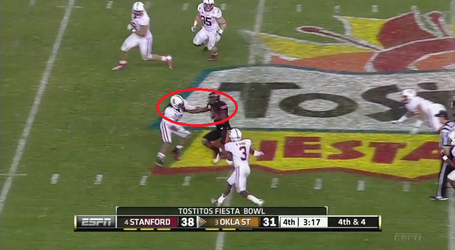 He gets a good stiff arm on the defender and gets past him to pick up as many yards as he possibly can. 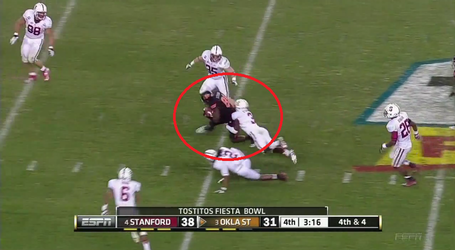 He eventually is brought down from behind, but he had already managed to get a first down and crossed midfield into the Stanford half of the field.

Blackmon had a huge performances in one of the biggest games he played in college. His stat line read eight receptions for 186 yards and three touchdowns. What are your thoughts on Justin Blackmon? Is he worthy of a top five pick? Is he even the best receiver in this class? Should the Redskins take him at 6 if they can't get a quarterback?