Tale of the Tape: Robert Griffin III vs Oklahoma

Share All sharing options for: Tale of the Tape: Robert Griffin III vs Oklahoma

This week's tale of the tape focus is highly touted Baylor quarterback and Heisman Trophy winner, Robert Griffin III. Rumors today suggest that Redskins owner Dan Synder is "very intrigued" by Griffin III, so lets have a look at the film. First on the agenda is his game against Oklahoma. Griffin III went 21 of 34 (61.8%) for 479 yards and four touchdowns with a quarterback rating of 218.9. Pretty impressive stats, lets see if the film lives up to it. 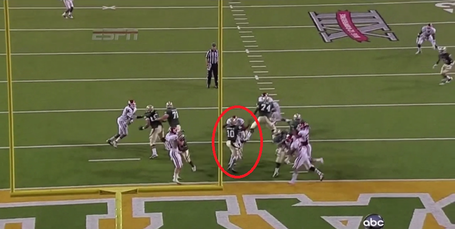 Here we have Baylor backed up near their own goal line. Griffin gets little support from his offensive line in picking up the blitz, but doesn't panic. He waits to the last possible moment to make a throw and gets the ball off as he gets hit, showing incredible toughness. 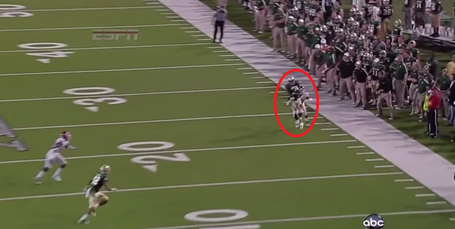 But not only does he get the throw off. He completes it; and not only does he complete it, he passes up the easier pass underneath in favor of a much tougher pass to the sideline further down the field. Huge play for Griffin III to open things up.

A little bit later on, Griffin III shows his ability to extend the play, but then nearly throws an interception. 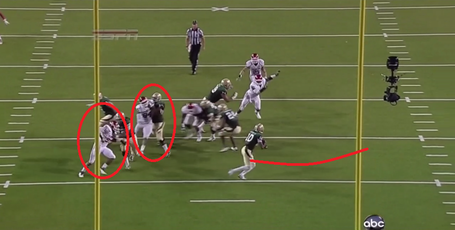 Griffin III does well to sense the pressure coming from the left side, and subsequently rolls to his right. 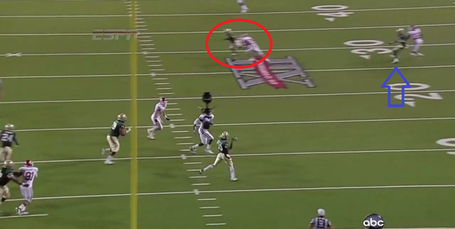 Griffin has a better option to the outside, but instead looks for his number one receiver, Kendall Wright. Now this is understandable. When the play breaks down and the quarterback begins to scramble, his natural instincts tell him to search for his best receiver. But in this situation he should realize he's covered and look to another target or throw it away. 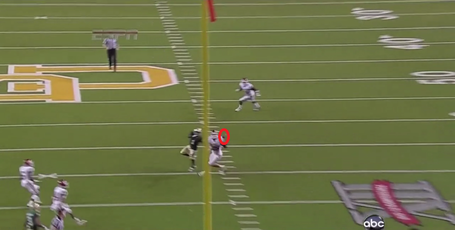 Instead Griffin III attempts to force the ball into a very tight window while throwing on the run and back across his body (try doing that, it's not easy). In the end, Wright does a great job of sticking an arm into the defenders hands and knocking the ball away to avoid the interception.

Moving swiftly on, next we have a kind of play that Griffin III will see a lot of in the NFL. 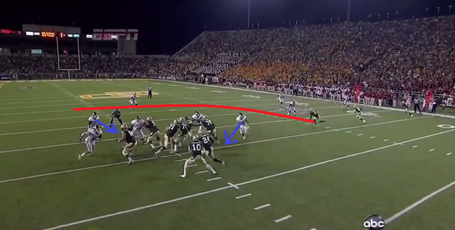 Here you see Griffin III faking the hand off to the running back. He draws in a linebacker from the left side of the line, and has a blitzer coming from the right. Wright is running a "Y Shallow Cross", which is essentially, a shallow crossing route from the 'Y' or slot receiver. 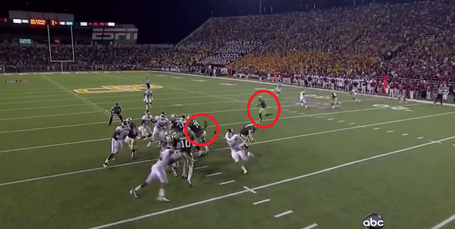 Griffin III sells the fake, drawing the defenders in. He gets the ball out quickly to Wright. 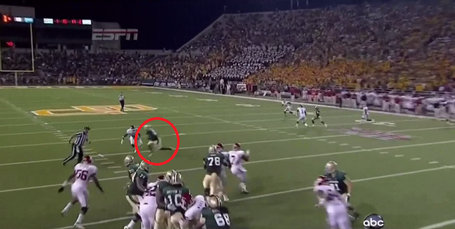 Griffin III gets an accurate throw away which is caught by Wright. Then it's all down to Wright to get yards after the catch (he just so happened to break the tackle of the safety and get 30-40 yards down the field on this play). Griffin III will have to be able to see the blitz coming and hit his hot read in behind them a lot in the NFL, because teams will be sending pressure after him in his rookie year to see how he copes.

This play shows off two of Griffin III's best aspects. 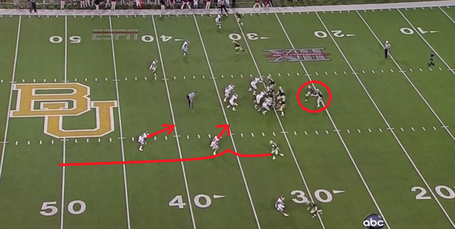 Here he fakes the hand off brilliantly, making both the linebacker and safety bite on the play-action. His receiver is running a 'Slugo' route, where he fakes a slant inside to get the defender to bite inside and then run past him deep. 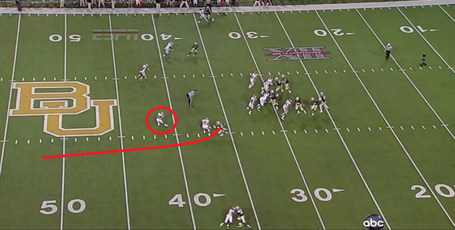 Once the defense actually recognizes the play, the safety is massively out of position and the receiver has eaten up the linebacker's cushion. 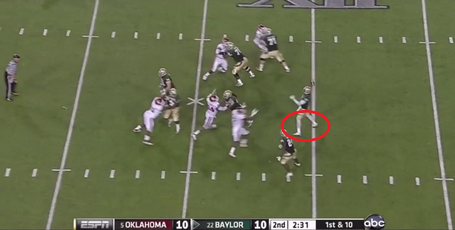 Griffin III makes the throw, even with some questionable footwork. 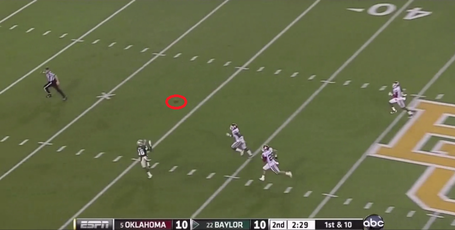 But has great touch on the throw, putting it perfectly into the receivers path. The receiver doesn't have to adjust his route or have to come back to get the ball. It falls beautifully over his shoulder and is an easy touchdown. If Griffin III can sell play action and then throw deep balls with as much touch and accuracy as these in the NFL, he's going to be a very dangerous weapon.

Another thing that makes Griffin III so highly rated is his ability to extend the play, but not just from scrambling, but stepping up and maneuvering while staying in the pocket, as these next two plays show. 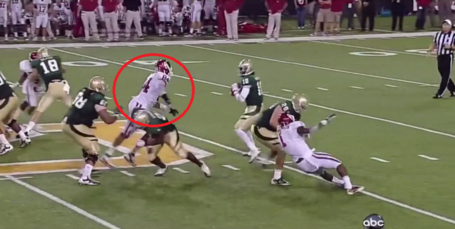 Here Griffin III has a defender that is coming right up the middle in his face. 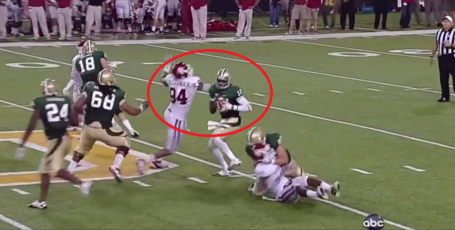 Griffin III calmly dips his shoulder (protecting the ball with both hands) and takes a step up into the pocket. The defender hardly lays a hand on him. 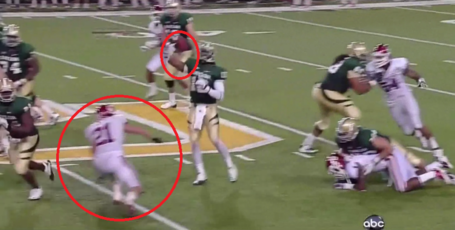 But it's not finished there, as Griffin III steps up, another defender appears in his face. Griffin keeps his eyes down field and fires a bullet before he gets taken down. The pass is very nearly completed into tight coverage, but is dropped.

The second example of pocket maneuverability comes later in the game and is much more orthodox, but no less effective or impressive. It comes on 3rd and 10, backed up near their own end zone with the score tied at 24-24. 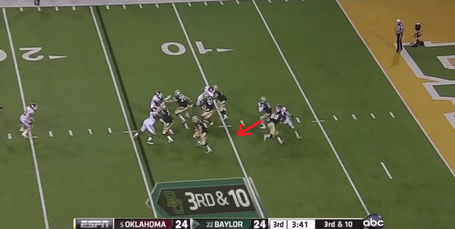 The quick outside rush forces Griffin III to step up in the pocket. 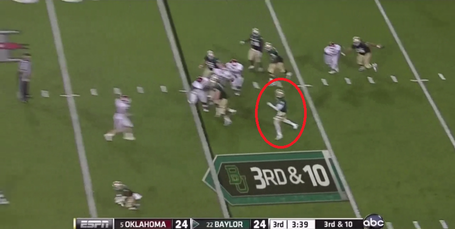 Griffin III resets himself after sliding up in the pocket and delivers a strike to the middle of the field. 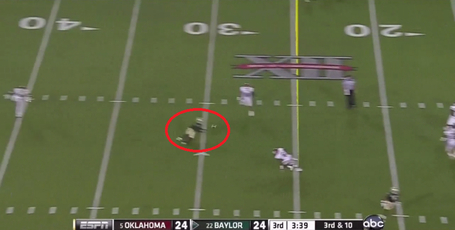 Where he connects with his receiver for a big first down. Yes the throw was behind the receiver, but it was a catch-able ball. The most impressive thing about this play is the poise he shows under the pressure of 3rd down with the score tied. A lot of 'athletic' quarterbacks would have taken off and run, while some others might have thrown it away or checked down. But Griffin III made the most out of the play.

However, just to bring the hype back down to earth for a second, Griffin does need to improve his decision making. 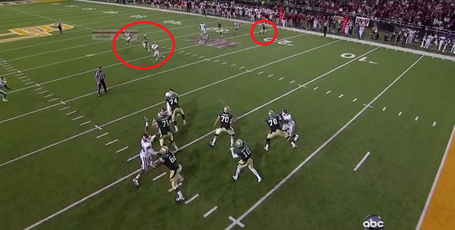 Here is the rediculous touchdown pass that was deflected by a defender and then caught by a receiver 20 yards down field. Griffin III makes a bad decision to throw into double (high-low) coverage. He has a man cutting in on the outside numbers to his right that is open, but he takes on the double coverage. He gets lucky the the underneath defender only deflects the pass, because in the NFL it would have been an interception and most probably taken back for six.

But to finish things off for this post, let me spark back up the Robert Griffin III bandwagon with an amazing, game-winning play. 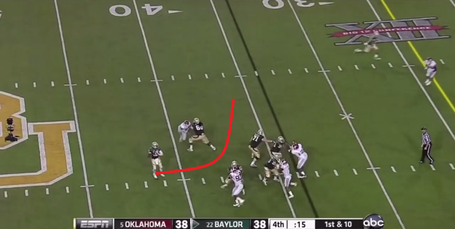 There's 15 seconds left in the game, tied at 38 a piece, Baylor have the ball in Oklahoma territory. Once again Griffin III finds himself under pressure and is forced to scramble. 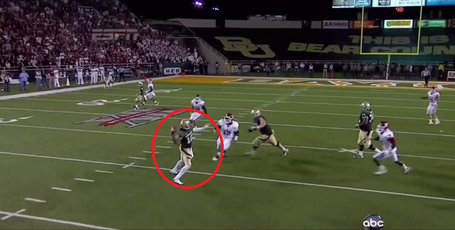 Griffin III breaks the pocket and rolls out to his left, all the while keeping his eyes down the field. He rejects check down targets and instead decides to go for it all. Throwing with questionable technique, and a big defender about to crush him, Griffin III launches it deep to the end-zone. 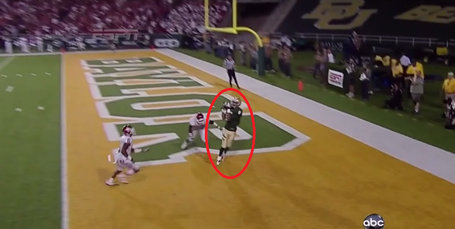 Amazingly he manages to throw his receiver open and completes the pass in the end zone for the game winning touchdown. If you haven't seen the video of this play, click any of these colored words to go watch it... you're welcome. But in all seriousness, how many quarterbacks playing in the NFL today could have made that play? I can't think of many.

So there you have it for Robert Griffin III vs Oklahoma. Make sure to check back later in the week for more tale of the tape.