On last weeks podcast teaser, I played a clip of Parks screwing up and calling Perry Riley, Riley Perry. However, the point he was attempting to make was a valid one (never thought I'd say that about Parks...) about the situation at inside linebacker. At this point, London Fletcher is due to become a free agent, leaving Riley and Keyaron Fox as the starting inside linebackers. Now it's assumed that Fletcher will be back, I can't see a situation where he's not playing in the burgundy and gold next year, but he can't play forever. We all are hopeful that Riley can develop into his replacement. But even if he does, that still leaves a hole in the defense, with our defense having two inside linebackers. Parks suggested a couple of names, the most likely of which was Stephen Tulloch, so I thought I'd profile him.

At 5'11", 240 pounds, the 27 year-old Tulloch is similar in size to Fletcher. Some may believe this is too small for the 3-4 defense, but Fletcher proved that height doesn't matter if you can play. Tulloch racked up 111 tackles, three sacks and two interceptions during the regular season, and followed that up with 15 combined tackles, two passes defended and a forced fumble in the playoff defeat to Saints.

I could sit here and show you a load of pictures of him stuffing the run, but instead I'm going to focus on his coverage ability. Coverage is a very underrated aspect in linebackers, particularly inside linebackers. Think about it, how many times do you hear talk about tight ends like Rob Gronkowski, Jimmy Graham and even our own Fred Davis creating mis-matches because linebackers can't cover them. Now if you have a linebacker that can keep up with those guys and cover them, surely he's a valuable asset? The Lions liked to utilize the ability of their front four pass-rushers, and therefore asked Tulloch to drop back into coverage a lot.

Film breakdown after the jump... 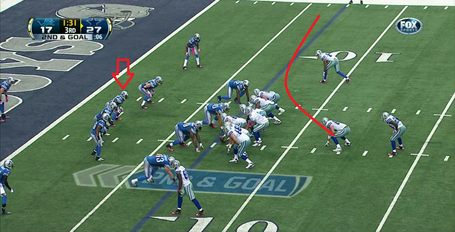 In this red zone situation, Tulloch is in man coverage with the fullback of the Cowboys. 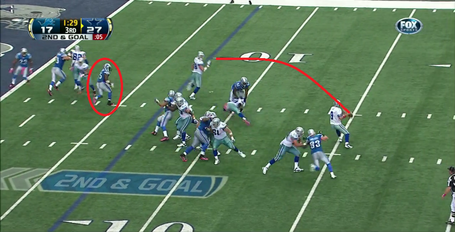 Quick pressure forces Romo to check down to the fullback. This is exactly the kind of play where a fullback can come under the radar and get a touchdown. 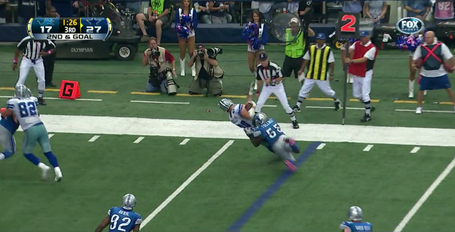 But Tulloch is right there and chases him down for a minimal gain, forcing third and goal.

Covering a fullback out of the backfield isn't something that's going to make teams go out and get him. Let's see how he does when he drops into a zone against Cowboys tight end Jason Witten. 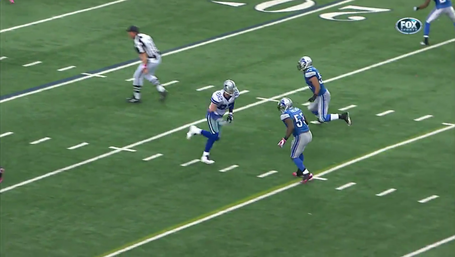 Witten enters Tulloch's zone in the middle of the field. 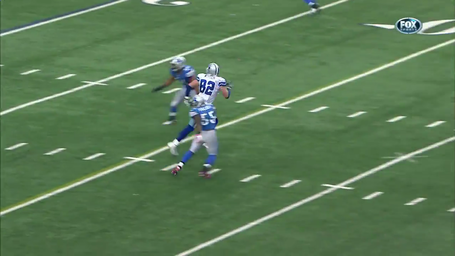 Knowing he has no safety help in the middle of the field, Tulloch opens his hips and runs with Witten. 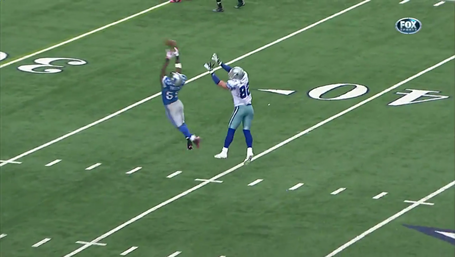 Tulloch then jumps underneath the route and gets his finger tips to the ball. He juggles it, but eventually comes down with it for the interception.

We move on from the Dallas game to Carolina. The Lions are holding onto a lead late in the game, and Tulloch makes two big plays that give his team the win. Here's the first. 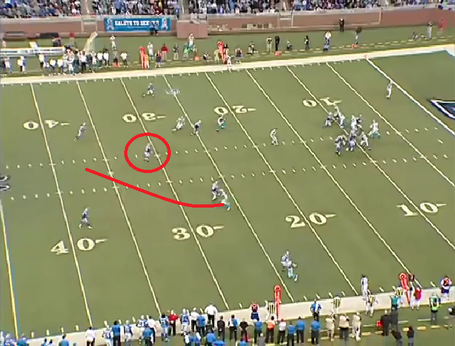 Here you see Tulloch covering a zone in the middle of the field. One of the Panthers receivers is running a post route in behind Tulloch's zone. 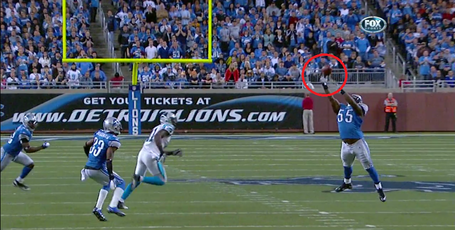 Tulloch watches Newton's throw all the way and makes a break for the ball. He manages to get a finger tip deflection on it. 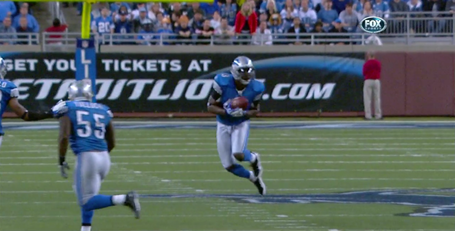 But that tip is enough to take it off the path of the receiver, and into the hands of the safety for the interception.

The Lions went on to score from the resulting possession, but the game wasn't fully wrapped up then. The Panthers still had a minute on the clock. 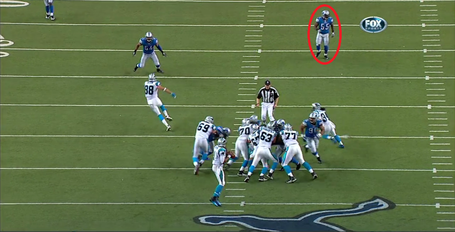 Tulloch again drops into a zone in the middle of the field. 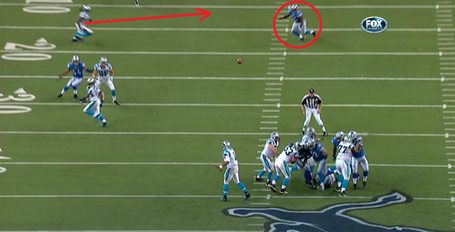 As Newton releases the ball, Tulloch makes a break on the ball. 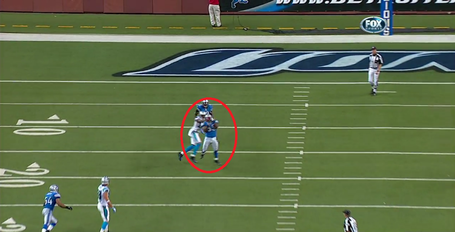 Tulloch undercuts the route and this time gets the interception himself. This killed any hopes of a comeback for the Panthers and sealed the win for the Lions. Two big plays in key situations.

But of course it's not all about coverage. In the 3-4 defense, Tulloch would also be asked to blitz on occasion. 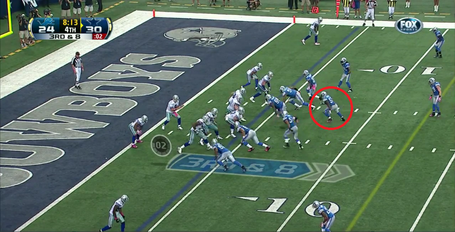 Back to the Dallas game, Tulloch is blitzing up the middle on 3rd down. 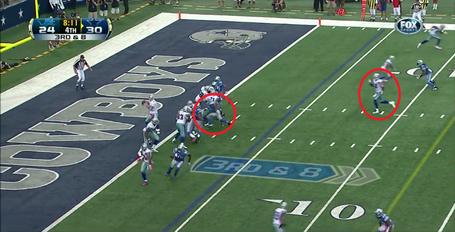 He presence up the middle forces Romo to look to his hot read out of the backfield, rather than check the middle of the field for the open receiver. 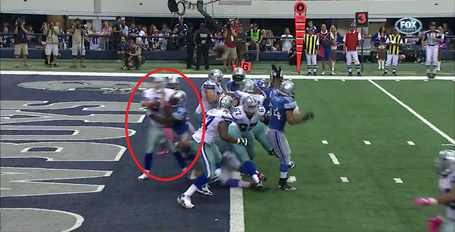 Then, just because we all love to see it, Tulloch delivers a big hit to Romo. That's always a plus in my book.

But alas, he doesn't get the sack on that play. 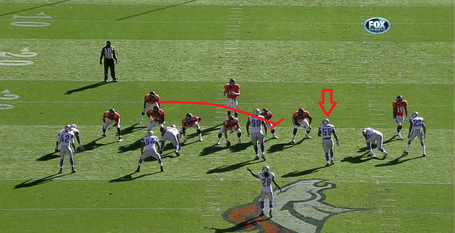 Here we see Tulloch up against one of the harder to bring down quarterbacks in Tim Tebow. The back is going to come across and chop block him. 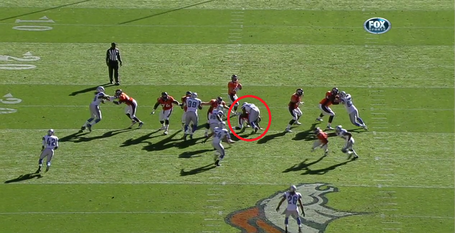 He gets chopped while Tebow is looking down field for a pass. But Tebow can't find anyone and attempts to break the pocket and scramble. 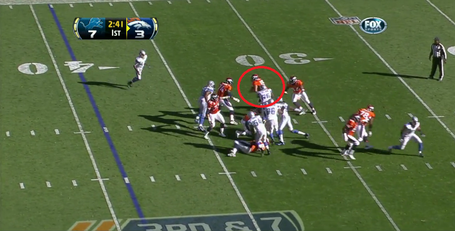 Tulloch manages to stay in the play and makes an extra effort to get back up and bring down Tebow, which he does successfully.

So what do you guys think? Am I overrating his coverage ability and linebackers in coverage in general? I think Tulloch would add something to this defense that we don't have already. Put him alongside Fletcher and drop Riley back to the third inside linebacker on the depth chart would provide good solid depth, and would help us transition once Fletcher does decide to pack it in. Tulloch fits in the mold of free agents we signed last year. He's relatively young, not a particularly flashy signing and won't cost a great deal. But he would provide a solid starter and add to an already formidable front seven.