Tale of the Tape: Ryan Tannehill vs Oklahoma State

Share All sharing options for: Tale of the Tape: Ryan Tannehill vs Oklahoma State

Last week I looked at Ryan Tannehill vs SMU, where I felt he had an almost flawless performance and hinted how he could be a good fit for the Washington Redskins. Today, I felt like it was only fair for me to break down a game where he struggled to try and help work out what his floor in the NFL could be. Here's his stat line from the Oklahoma State game: 28 of 47 (59.6% completion), 309 yards, two touchdowns, three interceptions at a rating of 116.1. 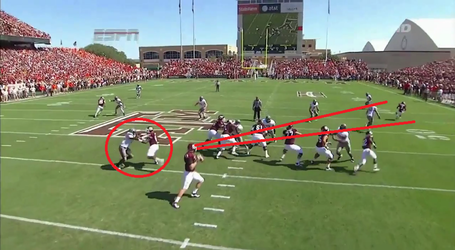 Here we have Tannehill dropping back, checking his first read. Also worth noting is the Oklahoma State pass rusher winning the block on Tannehill's blindside. 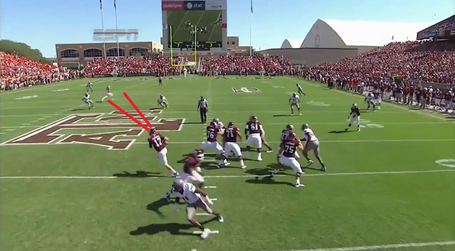 Tannehill senses the pressure and is forced to move out of the pocket. But he does a good job of keeping his eyes down field, finding his go-to man, Ryan Swope. 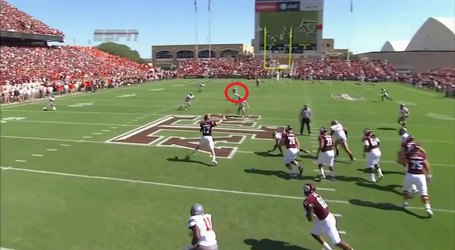 Tannehill makes an awkward throw look easy as he goes over the top of the linebacker and right into the numbers of Swope. Very good play from Tannehill.

Here we have a similar situation where Tannehill has to escape the pocket. 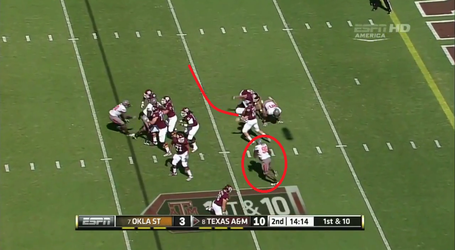 Tannehill feels the pressure from his blindside again, and starts to move from the edge pressure. 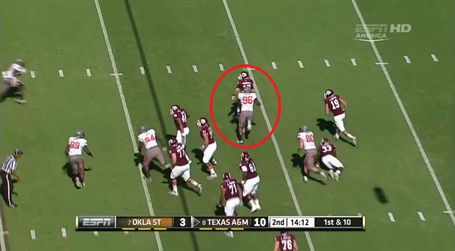 This is the point Tannehill needs to make a decision. He has done a good job up until this point to extend the play, but now has to decide to either tuck it and run, or throw the ball away. 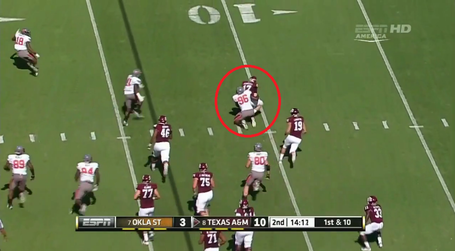 But Tannehill shows some of his inexperience and gets sacked. A veteran quarterback in the NFL would have make the decision quicker and not taken the sack. It's hard to knock Tannehill, because he does well to extend the play, but he realize that the pressure is coming and that he has to make a decision quicker. That should come with experience.

Next we have one of his touchdown throws. There are good and bad things on this play but it does ultimately result in a touchdown. 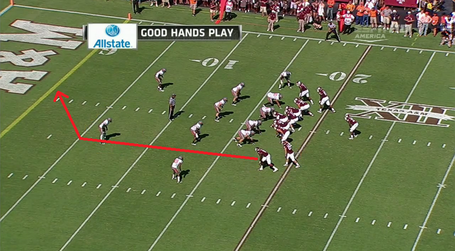 Tannehill has a simple two deep safety coverage. He knows Jeff Fuller is running a post route that could find the gap between the safeties. 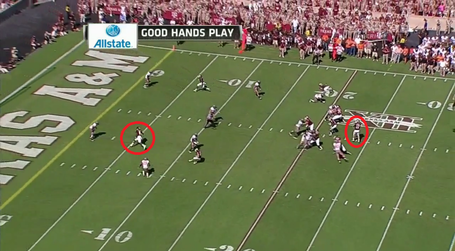 Here's what I don't like about this throw. Tannehill needs to anticipate his receiver cutting and throw the ball as he cuts rather than wait for him to get open. Fuller is just cutting inside and Tannehill hasn't started his throwing motion. The ball should be out by now, or at least on its way out, in order to get the maximum separation between the receiver and the man covering him. 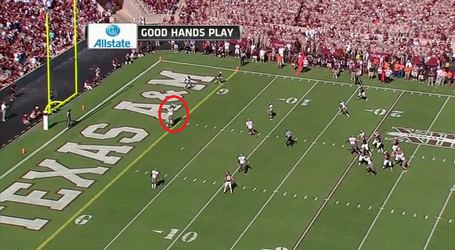 That being said, Tannehill does manage to put the ball out of the reach of the defender and completes the touchdown pass. He shows good accuracy and arm strength to get the ball where it needs to be.

In contrast, later on in the game, Tannehill shows good anticipation. 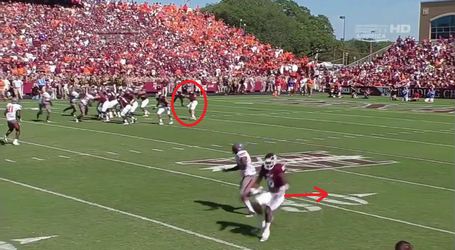 Here you can see that his receiver has yet to make the cut, but has started to slow down. Tannehill has begun the throwing motion in anticipation of the receiver making the cut. 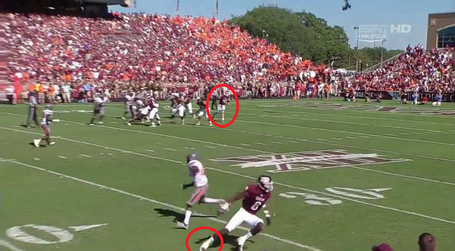 The ball is in the air when Fuller sticks his foot in the ground and begins his cut. 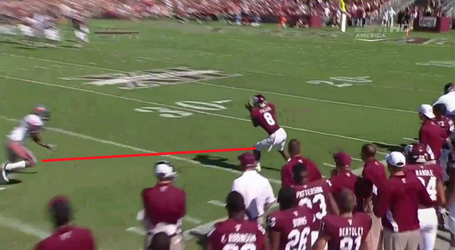 As you can see, when Fuller makes the catch, he has four or five yards of separation from the corner, giving him a chance to make a move and get past him. If Tannehill had waited until after the cut to make the throw, the corner would have cover the ground and possibly could have batted down the pass or even intercepted it.

There is a downside to anticipating throws, however. If you aren't fully in sync with a receiver, or if he slips and falls, you can get intercepted easily, like Tannhill's first interception. 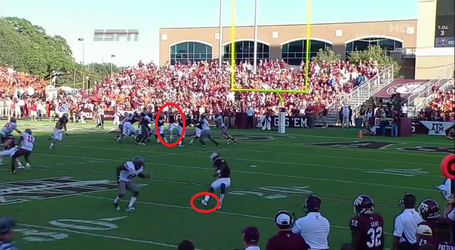 Once again, Tannehill anticipates the cut and begins to throw. 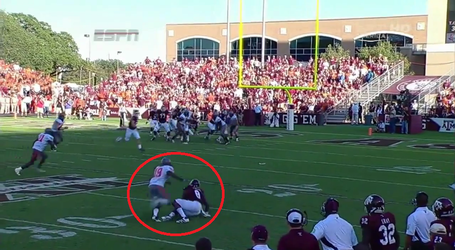 The ball is in the air, but Fuller slips and falls to the ground while attempting to make his cut back to the ball. This tells the corner the route and gives him a big chance to jump it. 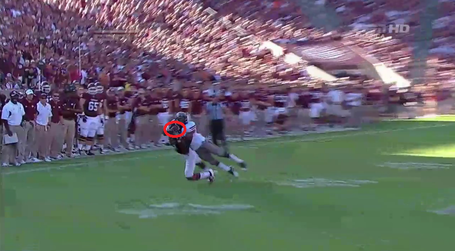 The corner makes a diving grab and gets the interception, but this one isn't on Tannehill.

Moving onto his next interception. 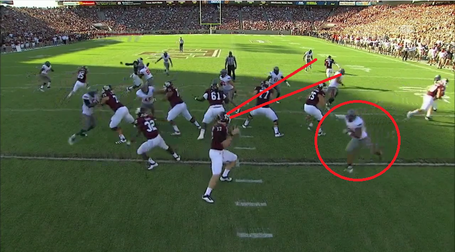 Here you can see Tannehill is looking for his receiver to make his cut. However the is an edge rusher that is coming unblocked. 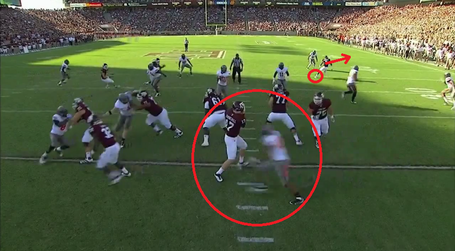 This is the point Tannehill should be throwing the ball, as the receiver is making his cut. But the free rusher forces him to step up and disrupts the timing of the play. 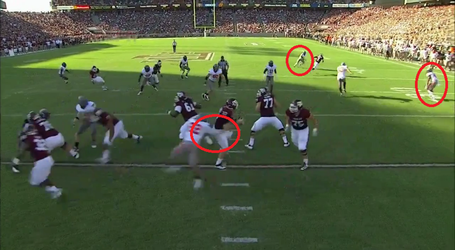 The free rusher manages to get an arm on Tannehill, further delaying the throw. This now allows the safety time to close the space created but the cut and allows time for the corner on the outside to drop back. 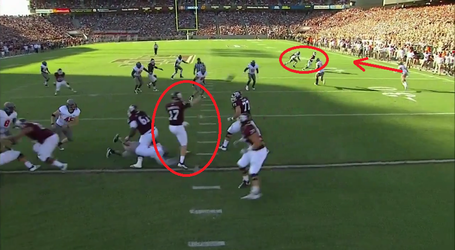 At this point, Tannehill should either try to recover and look for other targets or just throw the ball away. Instead, he forces an off-balanced throw to a receiver that is now covered. 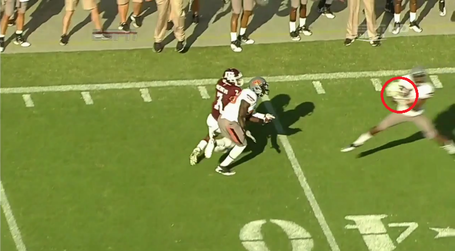 The corner on the outside had the time to drop back and make the play, but the safety could have equally come away with the ball. This was a forced throw created by pressure that disrupted timing. Tannehill can't afford to try and force throws when the timing has been disrupted, he needs to look for other targets, such as his hot read or just throw the ball away.

Tannehill's third interception was also a bad one. 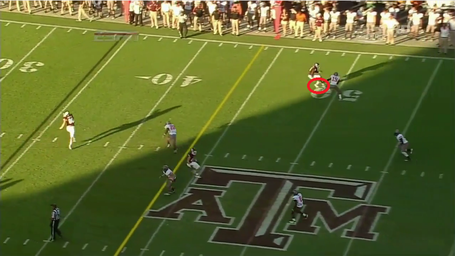 Tannehill is late on this throw, the receiver is about to make his break, but Tannehill hasn't started the throwing motion. 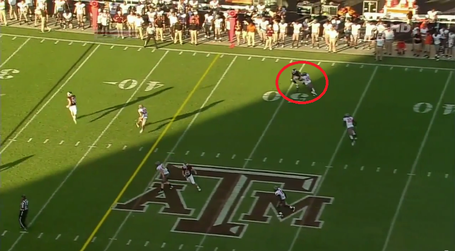 The ball has just been thrown as the receiver is out of his break. The coverage is very tight. 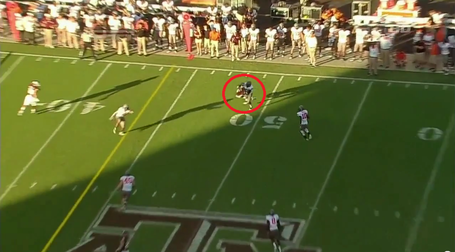 The throw is then off target. Tannehill appears to have thrown the ball expecting the receiver to take a step or two more before his cut. The corner hardly has to move to make a play on the ball, while the receiver has to dive to try and stop the interception. 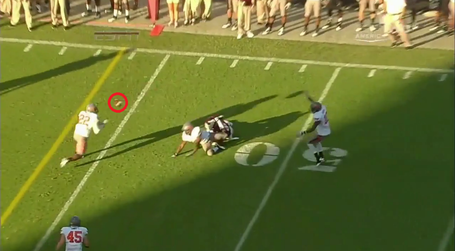 The ball gets deflected up in the air and is intercepted by a trailing defender. This is a bad throw with poor timing and into good tight coverage. I expect Tannehill was expecting his receiver to take an extra couple of steps before making his break, but the coverage was tight enough that he should have looked elsewhere.

So overall, an up and down performance from Tannehill in this game. His team lost 29-30 to Oklahoma State, but quite possibly would have won it if Tannehill hadn't forced two bad throws that got intercepted. What do you make of this performance?

Also, props to Aaron Aloysius for providing me the links to the footage on twitter. Go give him a follow.