Last week I discussed Dwayne Bowe, his abilities, and his potential to be our No.1 here in Washington. This week I am moving South to New Orleans and taking a look at #17, New Orleans WR Robert Meachem.

Meachem is definitely a potential No.1, adding speed and a deep threat to the Redskins' lacking WR Corps. Unlike Dwayne Bowe, Meachem isn't the Saints' only weapon at wideout, making signing him a little bit easier. At 27 years old and in the prime of his career, look to see a few teams making bids on him in the offseason.

Meachem is constantly Brees' target downfield for big chunks of yards. That's another asset the Redskins are missing; A playmaker wideout, a deep threat, something to worry about when the Redskins passing game is brought into conversation by defensive coordinators (not betting on how many picks Beck or Gross-Man will gift them with the game on the line).

In an interview with Jennifer Trosclair, Meachem had this to say about moving to another team and taking a bigger workload (The original Tebow answer, here):

JT: ...I am not sure if you keep up with Fantasy Football blogs and other free agency news sites, but you are currently at the top of many Free Agency Wish Lists for teams such as the Cardinals, Broncos, Titans, Eagles, and Redskins. One Washington Redskin article actually states that their team could add some "downfield potential to their receiving corps" by signing you. How does this make you feel and what are your thoughts on going to a team that will give you a bigger role?

RM: I would love that but right now I am just leaving it in my agent's hands and God's hands. I'm just letting them do what they do. You always think about that - what would it be like to have 80 or 90 catches. On the Saints, we have a lot of weapons, so it's tough to reach your 80 or 90 mark.

This tells me, not that he wants to leave the Saints, because who would? But he definitely has the desire to have more of a workload, and be more of a team's go-to guy. The Redskins can definitely provide that opportunity.

I'll look at all of the items I did last week, with a few tweaks, after the jump...

This one is going to be a little watered down because of time constraints. But here's my quick snapshot from his film

Hands: A He does have great hands, and can make plays with them, but sometimes he drops the easy ones. Not often. Will go up for a ball vertically, leaving himself open to a hit. Constantly uses his hands to pull in a ball in lieu of using his body.

Speed: A- He has great speed, often gaining a step on his man immediately off the line.

Route Running: B+ Basically, he just runs down the field and gets open. Which is something. At least, that's what it looks like. Kidding, he has some crisp routes, but tends to overrun his short ones (curls, 10yd ins/outs, etc.)

Agility:A+ He makes his money on his moves. Below there will be an example of a double move completely turning a Lions' defender around. It was like watching And1 basketball.

Reliability: A I don't see much of a problem with lingering injuries aside from him just being clumsy... Last year he left a game with an injury but returned in the fourth quarter.

Intangibles: His attitude on the field. He never stops. In '09 while playing the Redskins, Kareem Moore intercepted a pass from Drew Brees. Meachem tore the ball out of his hands and returned it for a touchdown. That same game, he caught a 50+ yard TD pass.

Here's some film from Week 13 against the Lions. These will all be plays used by the Redskins, so you can see the chunks of yards he grabs. Granted, he has Drew Brees throwing to him, but hopefully that issue will be fixed this offseason as well. 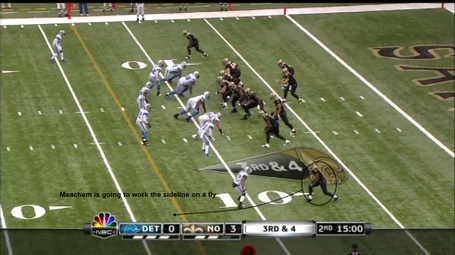 This is meachem playing outside opposite of what looks like Aaron Berry. Meachem recognizes Berry moving up instead of playing off, and will burn him on a go. 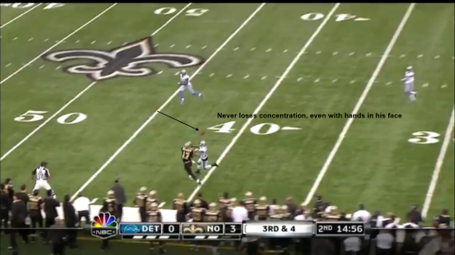 Tight coverage by Wright, but an excellent throw by Brees. Meachem never loses concentration and pulls in the 40+ yard bomb. 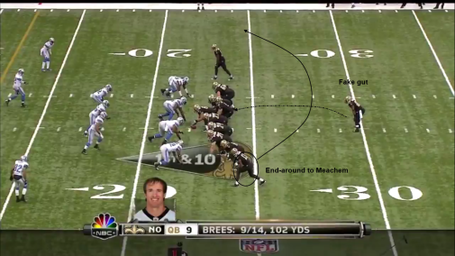 Here's a bit of 'trickery'.. Well, it is the Saints. Fake gut to Sproles, end-around to Meachem. 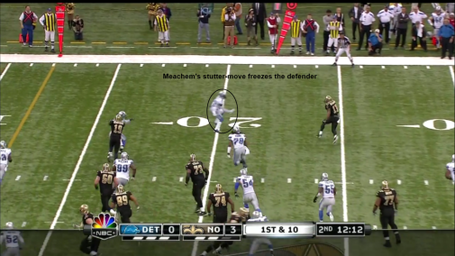 This is the first representation of his agility/moves. He throws down a little stutter-step, and freezes the defender 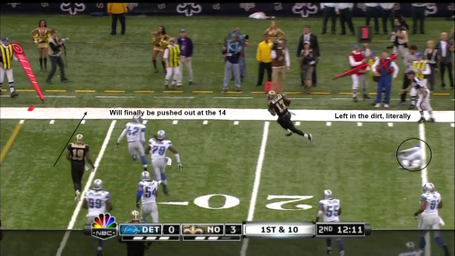 Leaves his man in the dust, quite literally, and gets pushed out at the Lions' 14. He has the inherent ability to make, at the very least, the first defender miss. That's crucial in a west-coast scheme. 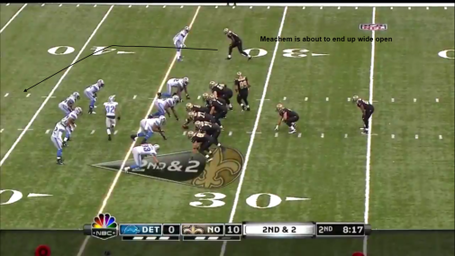 Meachem is going on a deep post, and will drop down underneath his defender. The safety takes himself out of the play, biting on play action. 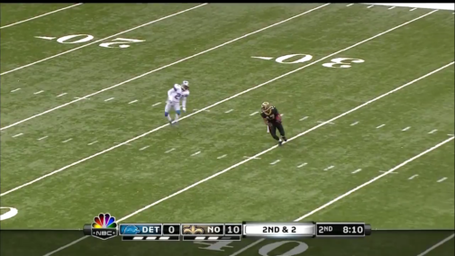 This is actually about to me more of a testament to the Lions' crappy tackling. 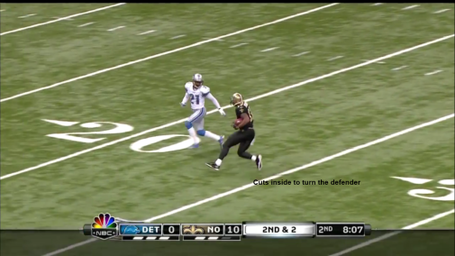 Meachem will cut inside, Wright fears he is out of position and will turn has backside to meet him. Poor decision 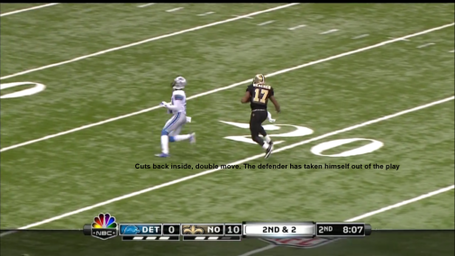 The damage is already done. Meachem cuts back outside. That double move is awesome. When watching the play, this is all done at 100% speed. He never lost a step on either. 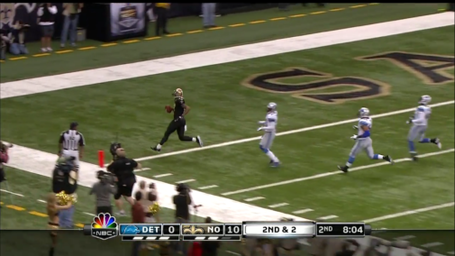 Result: Touchdown. None of the Redskins receivers this year were able to constantly grab chunks of yards like this. On most of these plays, he had one defender to get past, unassigned to a blocker. He did it. I would like to see any of the Redskins current starters be trusted with doing that.

Meachem would be a great addition to the 'Skins receiving corp. He won't be as hard to acquire as Colston, but still brings a lot of the same skill sets: Deep threat, makes defenders miss on short passes, and has a great attitude off the field.

The possibility is strong of Meachem, along with Colston, being just an average receiver placed in the right offensive scheme with the right quarterback. But his signing would still be an upgrade over literally every single one of the Redskins receiving corp.

Check in tomorrow for Steve's post on how much Meachem will cost to come to the Burgundy and Gold.

Check out my website, a Redskins fan blog, The Burgundy Warpath