The fantasy football playoffs are here, so it's time to really kick things into gear with your studs! Pound your opponent's box-score fury that is Percy Harvin, Rob Gronkowski, LeSean McCoy, and...ooh. Yikes.

Well, I guess this is the end. Just accept that your season is over if that was your team, and even if it wasn't, it's probably going to be over regardless. That won't be the case unless, of course, you happen to be that insufferable clown-jerk who wins every week with picks that make no sense. In which case, just start Charles Clay and Donnie Avery and resume your ridiculous winning streak so the rest of your league can resume hating your every breath. I hate you too. Just know that.

But let's get to some people I don't hate:

I need to choose one WR for my flex, non ppr:

Cecil Shorts has been a godsend for waiver wire scroungers this season, but it looks like his run of fantasy awesomeness could be at an end with those concussion issues. Players have been able to bounce back from that in a short span before, but this is a new injury Shorts is dealing with, and truth be told, it's very hard to gauge how he will respond. I'm not touching him this week if I have other good options.

And you are right, Decker has disappeared with the continued improvement of Demariyus Thomas, which leaves you with Torrey Smith in the end. It's scary to roll with him given Joe Flacco's ineptitude on the road, but that doesn't mean either can't rack-up some nice yards. Don't forget that despite being horrendous for the first 55 minutes of his last road game, Flacco still found Smith enough times to let him tally 144 receiving yards against a porous Chargers defense.

The Redskins defense, meanwhile, has struggled to stop every team not named the Eagles this season, and Flacco will take tons of shots deep against them on Sunday. I would be willing to bet that he and Smith connect for a big gain and that the latter has a good day for your fantasy team.

Thank you. It is very dear to me.

As members of Hogs Haven League A, what are your thoughts on one nameless owner abandoning his team in the stretch run? I lost the playoff tie breaker at 8-5 partially due to someone still playing McCoy in week 13. Should this owner suffer public shame?

Probably, especially if the McCoy you're referring to is Colt and not LeSean. Although I have to admit that I would respect the sarcasm of the owner who did that.

The truth is, lots of leagues have issues with teams tanking down the stretch. Teams will do this thinking that it doesn't matter if they are in the running any more, but it really does affect the league as a whole. You provided a good example of that.

To prevent this from happening, some leagues grant incentives for the team that scores the highest point total each week, and that way, a team that is 1-8 could conceivably be playing for something if not a championship. Maybe the team that gets the top score the most weeks could get a wild-card spot? I don't know, just a thought.

And honestly, I can't really get on the soapbox here and voice my shame on the matter of quitting teams. I haven't exactly been attentive to my HH team recently, but a lot of that is due to my own stupidity and thinking the playoffs started waaaaay before they actually did. Sorry to any teams that may have affected.

But you know what? There are lots of things that keep you out of the playoffs, and it likely doesn't hinge on someone starting an injured player. It's probably for reasons like not starting Doug Martin that day he went off on the Raiders. I mean, look at this! Who would do such a stupid thing? 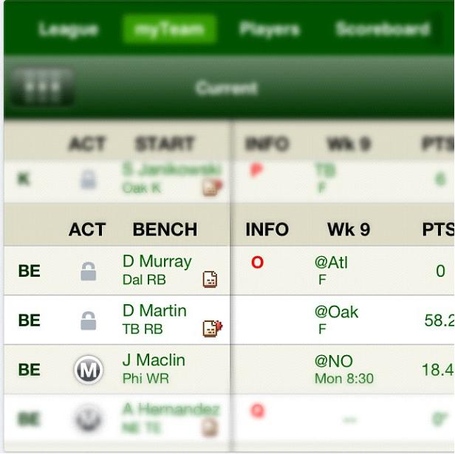 Huh. Guess that was me. Why do you people keep asking me questions?

Dan, have you ever thought about showing more cheerleader cleavage? It may help reader response...

Wow. No, dude. Nobody wants to see my cleavage, let alone me dressed as a cheerleader.

But seriously, Chris Givens or Steve Johnson in a non-ppr?

This is a tough one, but I'm going to have to go with Givens here. Givens has caught 16 passes on 19 targets over the past two weeks, which is something you want to see, but there is always the concern over whether that rate is sustainable. It's not, but that doesn't mean he can't be a viable option in the meantime while Danny Amendola gets healthy.

I feel safer with that option over Steve Johnson, who scared a lot of his fantasy owners after being targeted just five times versus the Jaguars. He won't be at 100 percent, and that doesn't bode well for a Bills team that-- at Week 14-- is starting to finally understand that it needs to run the ball more with its two stud running backs. The Bills will still take their downfield shots, but as long as they continue to pack the one-two punch of C.J. Spiller and Fred Jackson, Johnson will be a risky boom-or-bust play this week. But, hey, if it will make you feel better, I'll put my pom-poms on for him.

Dez is a must-start every week now. For all the criticisms he gets, he has really turned it on recently, and if there is any drop-off down the stretch, it surely won't be because of a lack of talent or opportunity. I would gamble with Torrey Smith for the reasons I stated above, and Colston is always a solid "high-floor" guy with the potential to find the end zone any given week.

The baffling element to this question is Garcon, who is a curious case. I would start him, but I want to take a moment to explain how bizarre his fantasy production has been in the past two weeks. He has played in barely over 50 percent of the Redskins offensive snaps since Thanksgiving (60/119), and of those 60, he has run 39 routes. And of those 39 routes, he has been targeted a heavy 18 times, catching 12 of those throws. From those 12 catches, he has generated 55.4 points in PPR leagues.

So, pretty much, Pierre Garcon is getting almost one fantasy point for every snap he plays. He's still nursing that foot injury, but as long as he is on the field, he is going to get looks from Robert Griffin III. At this point, Garcon has proven he has the talent to make the most of those chances.

What do you do if you're worried about Arian Foster being rested in final weeks? Tate, Forsett, or other team's RB?

I would take Ben Tate for insurance if he's still available. If something were to happen to Arian Foster,and the Texans still have something to play for, I think Tate gets the go. However, Justin Forsett has been doing well in mop-up duties, and if the Texans are locked in their seeding, I'd expect Forsett to get the rock instead of rush Tate into action. They would want him healthy.

But at the same time, be prepared for this "resting Foster" thing to be a non-issue. Yes, the Texans have a two-game lead for the No. 1 seed, but they are going to need that cushion with the Patriots, Vikings and two matchups against the Colts still to go. The Texans can conceivably clinch home field advantage after Week 15, but that is far from a gimme. Be prepared for that scenario with Forsett, but I can't bank on it being a likely chance that you will need him.

I love me some Danario this week, who has had a consistent double-digit output in PPR leagues since becoming a starter. Mike Williams is part of an exciting offense in Tampa, and though they have their best days ahead of them, he just has way too much variance to make me feel comfortable over starting him in favor of your other options. Ben Roethlisberger's return would make Mike Wallace a better start than he has been recently, but remember that even with a healthy Roethlisberger, Wallace has been infuriating. All of them have a chance of breaking out at any given time, but Alexander provides you with the best one this week.

That's all for this week, everyone. I had a TON of questions to go through this week and I know I didn't get to most of them, so go ahead and post them in the comments or reach me at @PFF_Dan.