RGIII attends a Wizards game with several other Redskins teammates.

Share All sharing options for: RGIII Assists Wizards in Win Over Heat

I never thought I'd be writing this next line in a million years: "In back-to-back nights, the Redskins beat the Super Bowl champs and the Wizards beat the defending NBA champs."

As has been protocol for many years, after a Redskins win, many players make the trek from Loudon County to D.C. to see the Wizards play a high profile team (Heat, Thunder, Lakers). Portis, Sellers, and Jason Campbell were regulars at Wiz games and last night was no exception.

RGIII got a huge ovation (many people standing) when he took his seat court-side in Ted Leonsis' seat with the Wizards trailing. The Wiz soon went on a run to take the lead and they held on for the rest of the game. So, RGIII can beat the Giants and help the Wizards win? Is walking on water next? Here are some pics and tweets from the evening.

Picture from left to right is RGIII's fiance, RGIII, a Wizards minority owner, and Orakpo. 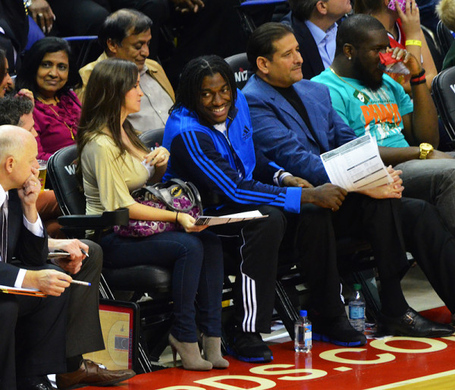 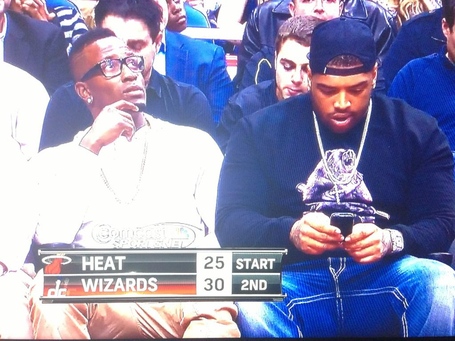 Terrelll Suggs was also court-side but I don't have a picture of it. Also a highlight of the night was RGIII saying he wants to convert Lebron James from a Cowboys fan to a Redskins fan...

My first Wizard's Game? Was a great one!

Great win tonight #Wizards! So awesome seeing it live! What a game!

#HeatNation vs Wizards 2nite, I'm in the building