The latest media links from Dallas and DC news outlets....now with extra rivalry and snarkiness.

Frank Herzog on Redskins-Cowboys
"The biggest factors for the Redskins on Sunday night are to help that defense out by keeping them off the field, and keeping the Dallas Cowboys offense off the field," he said. "And I think that’s where you’re gonna see a throwback, to run the football. This has been a year where we’ve seen passing setting up the run."

3TFO: Cowboys @ Redskins, Week 17 | ProFootballFocus.comGreat read on all the different ways the Skins have tried to contain Dez unsuccessfully. Alfred Morris should shine.DeMarco Murray the big wildcard in this game.

Week 17 NFC East picks – Blogging the bEastThat Thanksgiving Cowboys team was much healthier than the one that will face the Skins today in Landover. The following is a list of Cowboys defenders that saw action last week against the Saints, and how many snaps they tallied

Cooley: RGIII is changing the way NFL football is played
"He does so many things that incorporate an 11th player on offense that the defense has to account for," Cooley continued. "Defensive schemes have always accounted for 10, and that’s just not the case anymore. He’s changing it completely."

Dexter Manley on Cowboys fans
"First of all, before you guys get started, I must tell you, a lot of fans – I mean, at least two or three hundred – in this whole region have come up and talked to me," Manley began. "And most of ‘em have had bad breath, and most of ‘em have hardly no teeth, whether black or white, and have run-over shoes. So that tells me that most of them have been Dallas Cowboys fans. They seem to be the ugliest people in the National Football League. I don’t understand that. Redskins fans, they wear a suit and tie, nice shoes, the heels not run-over, and no bad breath."

Theismann: Griffin III Ready In Every Regard
Redskins legend Joe Theismann was the last franchise QB in Washington, but thinks the Redskins may have found their long-awaited answer in Robert Griffin III.

The Redskins Blog | Redskins-Cowboys: Experts Pick ‘Em
Pete Prisco, who predicted the Redskins would only have 3 wins all year, likes the Cowboys to win this game.

The Redskins Blog | AccuScore Projects ‘Skins-Cowboys Game
AccuScore is going with the Redskins at 51 percent (5,100) out of 10,000 simulations.

The Redskins Blog | Cowboy Great Justifies Illegal Hits On RG3
"The way you do that is you go out on that field and you knock him around. Even if it costs you a 15-yard penalty, and I’m only saying this if it’s not a critical situation or anything. Sometimes you have to deliver that kind of blow and that kind of message to let him know it’s going to be like this all day and not a walk in the park.

The Redskins Blog | Behind The Scenes: SNF Introductions

The Redskins Blog | Redskins 10-for-16 In Rookie Of The Week
It’s sixth straight week and 10th time overall a Washington rookie has won the award this season.

Redskins say Griffin will be able to run the ball effectively if needed
"I think I know the play you’re talking about," Shanahan said. "And I think we missed a block on the outside. Robert wasn’t going to be able to get much more. So I think he just strided it out of bounds, where usually he’s digging out a little bit harder.

Redskins Final Thoughts: Week 17 | WashingtonExaminer.com
Maurice Hurt did a better-than-expected job at right tackle, but there were a number of times he failed to block anyone on stretch zones to the left. The best thing I can say is that he did not commit a major mistake and I’m not being facetious when I say that.

History of Tailgating in Washington " CBS DC
Take a trip down memory lane and commemorate football seasons that have passed as we move closer to what might become an epic moment in the history of the Washington Redskins.

Work on Redskins Training Camp Could Start Soon " CBS DC
The Redskins have agreed to hold their summer training camp in Richmond for the next eight years as part of an economic incentive deal struck with the state.

Williams Now Among NFL's Elite Left Tackles
"You don't worry about nothing else but that particular snap and rep," Williams said during training camp. "I compete and I hate losing. I feel like I’ve got a point to prove. I'm trying to be the best. Not just better—I want to be dominant."

Film breakdown: The Redskins should be able to easily win the ground game against the Cowboys – Blogging the bEast

From 3-6 to 9-6: How did the Redskins do it? | HamptonRoads.com | PilotOnline.com
Washington's turnover differential of plus-14 is third in the league and its best ratio in 20 years. Only five of Griffin's 375 pass attempts have been intercepted, a remarkable number especially for a rookie. And the Redskins have lost only six fumbles - they averaged 11.7 lost fumbles the last three seasons.

All of America is rooting for the Redskins... 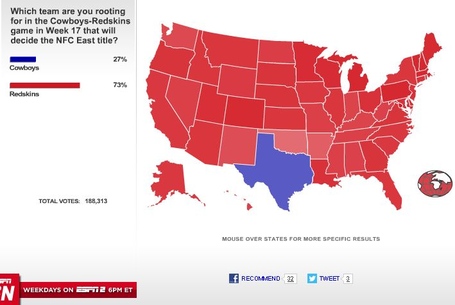