Its the Redskins most important week of the year. We've been saying that every week since we played the Panthers way back in week nine. But this week was almost scripted to be one of the biggest and best story lines of the NFL season. Not only have the Redskins gone on a six-game winning streak since the bye, but they play the old enemy in a fight for the divisional crown. The Dallas Cowboys come to town on the final regular season week of Robert Griffin III's amazing rookie year.

Offensively, we know the Redskins can score on this Dallas defense. Griffin and Co put up 38 points against Dallas in Jerry Jones house, 28 of which came in the one quarter alone. But, as always, its the Redskins defense that is the cause of concern. The Cowboys managed 31 points of their own against Washington. So what should the Redskins be looking out for?

The Redskins run defense has been solid most of the year, ranking fifth in the NFL. But the Cowboys have creative ways of getting their running backs the ball in space without having to run between the tackles. Take a look at this play against the Saints last week. 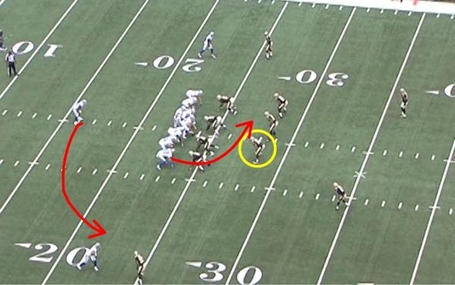 The Cowboys show a run heavy look with two tight ends and a running back in on the play. The Saints keep to their base personnel group. The Saints linebacker circled in yellow is assigned to running back DeMarco Murray if the Cowboys elect to pass. 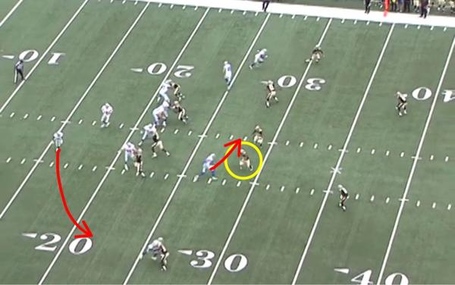 Tony Romo drops back to pass, so the Saints linebacker rushes over to cover Murray. As he does this, tight end Jason Witten cuts across the middle of the field, forcing the linebacker to take evasive action to avoid the collision. 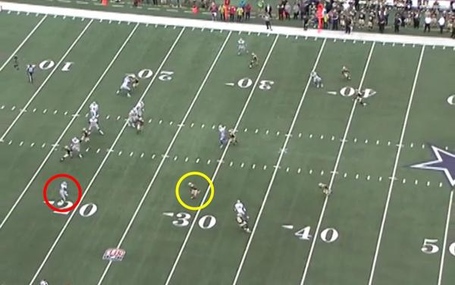 As Murray secures the pass, you can see there is a ten yard gap between him and the Saints linebacker. That's a free five yard pick up every time assuming the defender is able to make the tackle. As we all know, you can't assume a Redskins player will make that tackle. If the Cowboys fail to establish the run early, look for swing passes like these to creep in and force the defense to cover from sideline to sideline.

One thing I've noticed from watching Romo (aside from some of the hilarious interceptions) is that he is very good at recognizing a blitz and buying time for his receivers to beat the coverage behind it. Sometimes he can beat the coverage with a terrific throw. 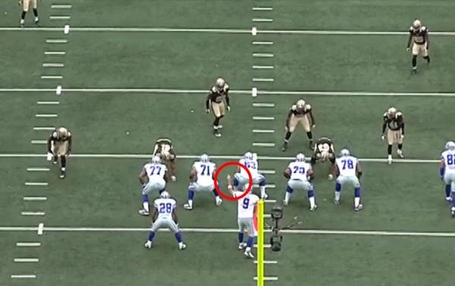 Here Romo spots the cornerback blitz that the Saints are running. He points it out to his offensive line before the snap. 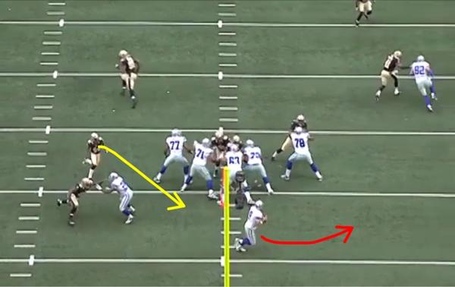 He realizes quickly that the line isn't going to pick up the blitz for him and begins to scramble early. 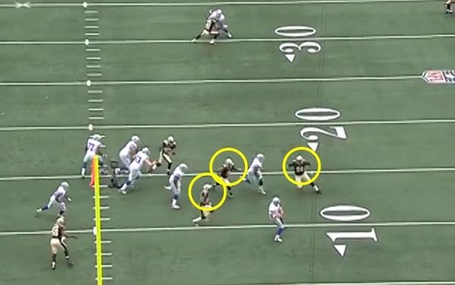 Just as three Saints defenders close in on him, Romo pulls the trigger into double coverage. 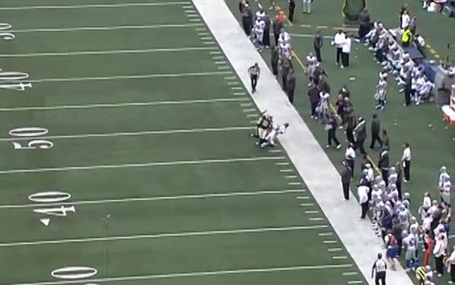 But the throw is placed so precisely that it takes both defenders out of the play and would have been a tremendous play had Miles Austin been able to hold onto the ball. But it was dropped and nobody remembers the outstanding effort from Romo.

The Redskins have to be weary of Romo's ability to buy extra time against the blitz until coverage breaks. We only have to look back to last year to remember Romo scrambling away from a Cover 0 blitz and firing to Dez Bryant after DeAngelo Hall's coverage had broken down. If the Redskins are going to blitz, they better disguise it well!

Annoyingly, Bryant has stepped up to the plate and become a legitimate number one receiving threat for the Cowboys of late. Against the Redskins, he posted a stat-line of eight receptions for 145 yards and a touchdown. Most recently against the Saints, he broke the 200 mark with nine receptions for 224 yards and two touchdowns. He has the ability to beat any corner in pure one-on-one, man coverage, which the Redskins have started to use as of late. He can go up and grab a high pass or fly past a corner and beat you deep. He will undoubtedly draw a lot of attention from the Redskins defense this week.

One counter to playing Bryant would be to play zone coverage. But the Cowboys have a certain tight end named Jason Witten who has ten years of experience finding holes in zone coverage. The moment the Redskins call zone coverage, Romo's eyes will go straight to his favorite tight end. Witten had nine receptions for 74 yards first time around and was a constant thorn in the Redskins side as he kept the chains moving on important drives. Like Bryant, he will need to be accounted for.

It will certainly be interesting to see how Jim Haslett and his Redskins defense plays this one out. They've kept themselves alive by causing turnovers. The Cowboys have a minus ten turnover differential, so there is hope that the Redskins can continue to creating turnovers, but its never a guaranteed thing. The way the Redskins and Robert Griffin III's script has read so far this season, I can see it going down to the wire once more. Lets hope the Redskins defense can step up when it matters most.