Call to Action: Stop Sitting the Redskins Band on Touchdowns

The Redskins organization needs to stop favoring the CD track of Hail to the Redskins for home touchdowns and instead use the Redskins Band.

Share All sharing options for: Call to Action: Stop Sitting the Redskins Band on Touchdowns

The game day experience at Fedex Field has come a long way since the Jim Zorn era. Bruce Allen, Larry Michael, and Dan Snyder deserve a lot of credit in that department, and I'm happy to give it to them, which I regularly do. The new, HD jumbotrons make a world of difference and it's common to hear of alumni visiting the stadium and interacting with fans.

However, there's still a big problem and it's been happening often the last two years. Whenever the Redskins score a Touchdown, as I'm celebrating with all my friends around me, I look up to the club level to see the Redskins band sitting in their seats as if they are in hour two of Palm Sunday mass. It's so deflating that a major history of the Redskins organization has been benched ala John Beck. When the Redskins scored that huge, fourth quarter touchdown to seal the game vs the Ravens, "Hail to the Redskins" blasted over the stadium speakers while the band remained rock solid in their seats. Many of the die-hard Redskins fans I sit around all looked around and kind of roll their eyes as the CD track began.

When I first heard the Redskins band would be moving from their long running endzone, lower level spot to the Club Level, I took exception. It seemed like a business move to move the band to an area where they can't sell tickets and open up another 100 tickets. I can't say I'd disagree if I were owner, but the fact they are now relegated to seat warmers during game winning touchdowns vs the Ravens is flat out insulting.

I was able to speak to one of the current, Redskins Band members who filled me in on what's going on.

The CD track debuted last season with the lyrics running on the HD boards, and I asked why they just can't have the band play the song and throw up the words on the jumbotron. "EXACTLY!," the band member agreed. I suppose syncing the band and the jumbotron could be trickier, but come on already, this is what rehearsals and practice is for. He continued with the band's frustrations:

For the Giants game we played three times. Three! And the Ravens....three, maybe four.

In that Ravens game, the Redskins had six scoring plays and who knows how many TV timeouts there were. The Redskins band knows 30-40 songs and it happens where the Redskins will play a CD track over the PA speakers for a song that the band knows. Imagine holding a trumpet and hearing a song you've rehearsed so many times play on CD instead? I asked what the band's schedule is:

We practice the beginning of April through July (2-3 week break)...once a week at the stadium during the season.

The Redskins recently provided the all volunteer band with new uniforms and equipment. Although they are not paid directly, they each receive two season tickets. What surprised me, but probably shouldn't have, is that over 90% of the band are professional musicians and can play so many songs. There's no reason they should be sitting so much. Perhaps the organization sees the crowd get rowdier when the CD track of Guns N Roses is played versus anything the band plays, but at the least, the band should be leading Redskins Nation in scores.

I contacted the Redskins multiple time for comment but have not received a reply yet. Hopefully for such a huge game as this week 17 matchup is vs Dallas, the Redskins Band is called into action more than 3-4 times a game. It's who we are. 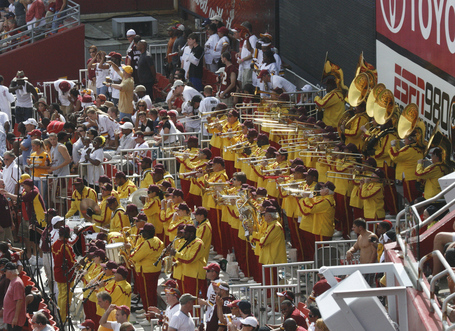