Greetings everyone, and welcome to my holiday sack.

As someone who spends too much time crunching data, poring over spreadsheets and attempting to generalize certain trends, let me draw the following conclusion without doing any of the above for once:

Week 15 was the worst week in fantasy football history. Ever.

Like, seriously, ever. Can you recall another week where so many key players in fantasy football lineup took the week off, and then did so at the most inopportune time?

Let's get to some championship questions, and hopefully they won't be followed by too many embittered answers:

Dcdeac from the Hogs Haven community writes: Couple questions. How effective do you see LeSean McCoy being in his first game back?

I think he'll be very effective. He's not coming off of a leg or a knee injury, or any of such that will affect his burst. But Andy Reid has said Bryce Brown will be in the mix, which alone doesn't scare me, but now you're coupling a shared backfield with a coach who just plain hates running the football. I'd still start McCoy, but my expectations will be tempered.

Cecil Shorts is not going to have any problem getting past the New England safeties, and you can bet that the Jaguars are going to be throwing quite a bit if they want to keep up with the Patriots. I love Danny Amendola this week as well, since he will be facing the Buccaneers, who trot out one of the league's worst pass defenses. If you're in a PPR league, I'd be tempted to roll with Amendola, but I just can't ignore Shorts' upside each week. It's the championship, and this is no time to get conservative.

Eyevee4 from the Hogs Haven community writes: In a non ppr Heath miller or Greg Olsen?

I've gotten a lot of questions about tight ends in the last few weeks. Know why? Because tight end is a fantasy wasteland this season. So many years, we've gotten stellar play from the security blankets of quarterbacks across the board, but that just isn't the case anymore. Tight ends just aren't the safety valve in 2012 that they were in previous years. #Mayans.

Ordinarily, I'd say you're scrounging for options, but you aren't. Heath Miller and Greg Olsen are ranked third and sixth in fantasy points for tight ends this season in standard leagues. That is ridiculous.

And though Miller is on fire, I would start Olsen this week given the fact that the Raiders have been just as horrible in defending tight ends this season as they have been in every other area. The Bengals, who Miller is facing, have fared pretty well in this department, not allowing a tight end to find the end zone over the past month and a half. Got to go with Greg.

@rymy29 writes via Twitter: Need some advice on Alfred Morris here, PPR league. What's his upside? Is their offensive line going to be shuffled?

In PPR leagues, Morris' upside takes a hit. There aren't too many running backs that can maximize the value that those leagues present, let alone Morris, who has been targeted all of 12 times this season. That isn't to say he isn't a great option to have, though. Only Arian Foster and Adrian Peterson have more rushing attempts on the season, and those opportunities by themselves make Morris a great play each week. A great fantasy day for Morris truly depends on his ability to find the end zone, but you could say that for anybody.

As far as the Redskins' offensive line goes, I wouldn't be overly concerned. Tyler Polumbus might not play due to a concussion, but there's almost no way there can be a dropoff given how poorly Polumbus has played this season.

According to Pro Football Focus, only Detroit's Jeff Backus and Green Bay's Marshall Newhouse have worse run-blocking grades this season among offensive tackles. So if Tom Compton or Maurice Hurt do in fact get the start over Polumbus, it would be very difficult to be worse. Sigh. It's hard to believe that all of the above is true for the man who laid a few decisive blocks on a certain legendary play.

Will Montgomery is dealing with a sprained knee, which is concerning, but he is expected to play through it. Although Montgomery's capacity is an unknown at the moment, the way Morris has played this season convinced me that he is a good enough back to put up numbers despite a weakened offensive line.

@mtnoble writes via Twitter: would you start Miles Austin or Brandon Lloyd this week?

I'd love to get both in my lineup, but I'd play it safe and go with Miles Austin this week. Brandon Lloyd has put up spectacular numbers over the last two weeks, and though he is appearing to turn a corner, it's hard to ignore his tendency to completely disappear. It's looking like Rob Gronkowski is going to play this week, which only dilutes the pool of targets for Tom Brady. That's not enough to really hurt the numbers of, say, Aaron Hernandez or Wes Welker, but Lloyd's someone I would worry about in this case.

Miles Austin, on the other hand, doesn't worry me as much. Tony Romo has more passing yards over the last five weeks than any other quarterback, and I expect that trend to continue in a shootout versus Drew Brees and company. Austin's 10 targets led the Cowboys a week ago, and as long as Tony Romo keeps throwing the ball, there will be plenty of catches to go around for Austin. You just can't assume that Brandon Lloyd will get the same volume that Austin does, so I'd feel a lot better going with the latter, who still presents big upside.

Rekka from the Hogs Haven community writes: Despite Detroit's defense getting curb stomped last week, I'm in the Championship. I dropped them for Indy's D against KC.

How in the name of Adrian Peterson's cyborg leg are you in the championship? Seriously. How did you get there if you started Roddy White and Danario Alexander last week? Your opponent must have had Mark Sanchez starting at every position for you to still be in this thing.

I guess you probably started James Jones, who had three scores versus the Vikings in the fantasy semifinals. Awesome. He had his day, and now you'll never need to hear from him again. James Jones only gets fantasy points when he gets touchdowns, and he's not going to get three again this week. That leaves you with a typically reliable core of White, Alexander and Josh Gordon, who despite having to deal with Champ Bailey this week, is always a threat to catch a long one. I'll take that upside from a WR3 any week.

Chillz from the Hogs Haven community writes: Should I add Braylon Edwards?

Not if you aren't doing it just to troll your league.

@brad_ov1 writes via Twitter: Chargers D at Jets or Pats D at Jax ??

I'm taking the Chargers in one of my leagues, despite how tempting it would be to start a Patriots team competing for playoff seeding versus the lowly Jaguars. Still, I'm making the right decision in playing the Chargers, and you would be too.

The Chargers' defense has been known to get lit-up by capable offenses this year, but good news-- they won't be facing a capable offense this week. The Jets are pathetic. They are as inept as it gets on the offensive side of the ball, and even though there will be an improvement from benching Mark Sanchez, it won't be a marked one. There may not be as many turnovers for the Jets this week, though it's still possible with a young quarterback. But still, the Chargers aren't so inept on defense that it would allow a team like the Jets to light up the scoreboard. Start the Chargers and hope for an interception-fest, but a low-scoring game for the Jets is a near certainty.

Also, will Colston find some fruit in a shootout? 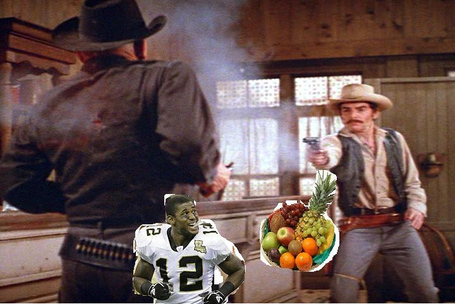 And on that note, that's going to be all from me this season. I had a lot of fun doing this, and hopefully I helped some of you all get this far. Once rosters start to shape up for next season (if the Mayans haven't killed us all before then, or however that whole thing works), I'll do some special off season columns, or "Summer Sacks" to help prepare everyone for fantasy drafts.

So once again, take care, thank you all for writing in, and if you have any more questions just post them in the comments section or tweet me @PFF_Dan.