The five in a row win Redskins face a limping Eagles team in Philadelphia. Has the team been playing better? Jimmy Kempski helps answers some of those questions.

Share All sharing options for: 5 Questions with Jimmy Kempski on Nick Foles and Redskins vs Eagles Matchup

Special thanks to JimmyK from Blogging the Beast, and now a Eagles Insider for the Morning Call, for taking some time to answer my questions.

1.) Nick Foles since throwing 2 INTs vs Skins has only thrown 1 over last 4 games (5 TDs). How would you evaluate his play at this point?

JimmyK: Like any QB (other than the infallible RG3 of course), he has his strengths and weaknesses. His pocket presence is excellent, and he has functional mobility and good footwork. I'll talk more about that in another one of your questions below. Good arm, not great. Very accurate on his short-intermediate throws, and can put great zip on the ball when he is able to step into his throw. Tough kid. He has taking a beating in some games, and it doesn't look like it affects him. He'll hang in until the last second and make tough throws even when he knows he's going to get blasted.

Deep balls have been an issue. First, there's an accuracy issue there. In the game against the Redskins, for example, he had DeSean Jackson wide open deep, but he threw the ball out of bounds. It could have been a TD. But also, he hasn't quite learned when to make a "power throw" on deep balls, and when there should be some touch. He seems to try to put too much touch on his deep balls, they wind of floating a bit, and that has led to him under-throwing receivers who were open deep. I don't think it's a matter of arm strength on the deep throws, because I've seen him show a very live arm in person. It's probably fixable, but for now it is an issue.

2.) I was surprised to see that Foles (not Reid or Marty) called that game winning play. Has the Eagles team shown that they've laid down yet or are they still fighting (defense too).

I really haven't seen the team "quit," although that's a popular thing for fans to claim when their teams stinks. I think the more fair thing to say is that a number of the Eagles' players can be "soft" at times, but the same would probably be true even if they were winning. Dominique Rodgers-Cromartie and Nnamdi Asomugha drive me nuts for their complete disinterest in tackling. Similarly, the Eagles receivers (specifically DeSean Jackson and Jeremy Maclin) will often self tackle themselves. It eats away at my soul little by little every time they lay down or skip out of bounds.

As a result of the guys that don't particularly enjoy contact, the knee jerk thing to say is that the team has "quit," but I certainly haven't seen any quit at all out of guys like Brandon Graham, DeMeco Ryans, and Trent Cole (even in a down year). Hell, it was just revealed that TE Clay Harbor played 3 quarters in the last game with 3 broken bones in his back.

You mentioned the play that Foles drew up in the sand. That was on a game winning drive against the Bucs a couple weeks ago. Impressive for a rookie. The Eagles were down 11 points with 7 minutes left. They were celebrating on the field after that game like they had just won a playoff game, and it probably felt like that after losing the previous 8 games. So I think they still want to win, but they're just so ridiculously depleted on offense that this season has completely collapsed.

3.) Do you have any faith the Eagles can win this game? What can the defense do to stop RGIII and what is the state of it these days?

Here were the Eagles' projected starters on offense way back around February, and where they are now:

So do I think the Skins will outscore the Eagles? Yes. Yes I do.

As for the Eagles' defense, here were the passer ratings they allowed during a 6 game stretch this season: 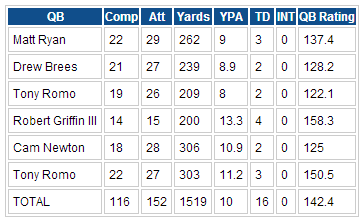 They've been much better since they fired DL coach Jim Washburn, who appeared to be a team cancer, but I'm not exactly confident they can stop RG3.

4.) Any updates on who you think (or would like) to be coach next year?

There a number intriguing options. If you were to compare hiring coaches to drafting players, Chip Kelly is the equivalent of a "boom or bust" guy. Those "hot college guys" are always tricky. Is he going to be Jimmy Johnson, or is he going to be Spurrier/Saban/Petrino/etc? I'm of the opinion that there are 32 teams in the NFL (so it's already extraordinary hard to win it all), and I'd prefer to be over-aggressive in landing a guy that can be awesome and win you the big one, even if you risk a disaster.

Mike McCoy (OC, Denver) is interesting. He adapts his scheme to fit the players around him, and not the other way around.

I also really like Greg Roman (OC, 49ers). He had a hand in developing Andrew Luck as an assistant under Jim Harbaugh at Stanford. Then he and Harbaugh had success making Alex Smith better than he ever was, in addition to what they're doing with Colin Kaepernick out there in San Francisco. I also like some of the creative looks they show in the run game. The Eagles should be built around LeSean McCoy and Bryce Brown going forward, in my opinion, and Roman would be a good candidate to get the most out of that pair.

5.) The Eagles OLine appears to be playing better. Is that more because they didn't know where Vick was? And what's your score prediction?

At the 2012 Combine, Nick Foles ran a 5.14 second 40 yard dash. Of the 14 QBs that participated in that drill, Foles finished dead last. He'll never be mistaken for Vick in terms of foot speed, However, foot speed should not be confused with mobility and pocket presence. Foles showed incredible pocket presence against the Bucs a few weeks ago. Here's a UKRedskin-style film breakdown of Foles' work in the pocket.

So to answer your question, while I think the OL is probably playing a little better, I think it has more to do with Foles' ability to move subtly within the pocket and buy more time, which he does far better than Vick.