Defending Dan Snyder: The NFL’s Conspiracy against The Worst Owner Ever*

How the salary cap, PED's, Albert Haynesworth and Jordan Black are all connected

Share All sharing options for: Defending Dan Snyder: The NFL’s Conspiracy against The Worst Owner Ever*

*The asterisk has to be there for now. Your beers cost more at the stadium because we all have to shoulder the responsibility of the cost of trades and free-agency that went unpaid for far too long—lest we place that burden upon the backs of our children, many of whom have never seen a Lombardi Trophy hoist in our nation’s capital. We have a coach, a quarterback and a winning record in December. Dan Snyder is no longer the NFL’s worst owner – for now.

I first need to call out Michael David Smith over at PFT for this asinine insinuation about Redskins offensive tackle Jordan Black's 4-game suspension:

"It’s interesting that Black is waiting until now to deny the reports that he has gained 50 pounds, which have been circulating for months. It’s also interesting that he still hasn’t explained how he ended up testing positive for PEDs if he is not, as he claims, a doper. But that’s Black’s story."

First off, there were no "reports" or rumors "circulating for months". The only thing that is interesting is that you think a third-string tackle would ever feel the need to address or deny non-accusatory "reports" about gaining weight necessary to play football.

The story YOU LINKED TO is from Sarah Kogod at the Washington Post:

Black drank up to eight protein shakes a day and ate a lot of peanut butter and jelly sandwiches to try to get close to his listed weight of 305 pounds. But putting back on the 50 pounds he struggled to lose almost took an emotional toll on him.

Any self-respecting sports journalist who has ever been within 100 yards of a football team understands that a 6-foot-5 professional athlete going from 250 to 300 pounds is neither unique nor indicative of steroid use.

Like it says in the article, "get close to his listed weight of 305 pounds," chances are he was really around 275-280. An NFL team is not going to release a roster with an offensive tackle listed under 300 pounds. These are the lineman Shanahan wants: light, quick, agile.

"I never gained 50 pounds. Prior to this season, I maintained a playing weight of 310 pounds. I currently weigh 275.2 pounds. I entered camp . . . at 270 pounds. I am the smallest offensive tackle in the NFL. It is not only a lie, but simply ridiculous for anyone to label me as a doper."

Again I have to refer to Mr. Smith's words because I believe the lack of nuance is detrimental to his own point. He titled his first report on Black's suspension "After gaining 50 pounds this year, Jordan Black busted for PEDs". Correct me if I'm reading too much into what he's saying, but it sounds like he's saying that Jordan Black used steroids to gain said 50 pounds.

The medicine that resulted in his positive test typically is prescribed for attention deficit hyperactivity disorder, according to a report by 106.7 The Fan’s Grant Paulsen, who cited an anonymous Redskins player.

He tested positive for this drug at one point earlier in his nine-year career, but he was not suspended because the league recognized his medical condition before the case reached the appeals process, he said.

Again, any person with any understanding of what ADD drugs are or at least how they work would know that GAINING WEIGHT ON AN AMPHETAMINE IS EXTREMELY DIFFICULT. There are over 200 banned substances in professional baseball; in the NFL there are less than 50. Simply lumping "performance enhancing drugs" into one category of "bigger, faster, stronger" is ignorant and in my opinion dangerous.

The real "reports" or news story at hand is not Jordan Black’s ADHD meds – it’s the league’s overt scrutiny of the Redskins for what seems to be a business vendetta.

I’m not a conspiracy theorist but the timing has been sketchy. Tanard Jackson was suspended the day before the season this year—yes, I understand he is a pothead who had a history—but that just makes him an even easier target.

Newsflash: most of the NFL smokes pot.

The day after Cedric Griffin has a decent game, the league comes down with his suspension for "PED’s". Black shouldn't have been on the radar except that with Polumbus’s concussion, he stands to take a substantial number of snaps.

Well, you didn't expect Dan Snyder, the owner of the Redskins, to embrace prosperity with the humility of a Mara or a Tisch, did you? So after years of running a beloved civic trust into the ground, after years of losing, of abject failure, Danny Boy had himself a moment in the sun last night. Snyder, in front of several media witnesses, had this to say to a Redskins staffer:

That says it all, doesn't it? That's how the league and most of the country views Dan Snyder: Destroyer of The Civic Trust. Remember when the whole league got their panties in a bunch because Dan Snyder tried to shovel all that wasted salary cap money into the uncapped year to save our franchise from the load of Albert Haynesworth’s belly and DeAngelo Hall’s ego? Hate Dan or love Dan, he didn't do that for himself - the Redskins will always make him rich - he did that to win.

Mara – the Giants owner— the guy in charge of the NFL's Management Council—the governing body that created fantasy rules and admitted collusion strictly to punish the two biggest rivals in his division -- He couldn't wait to stick it to Snyder:

"I thought the penalties imposed were proper. What they did was in violation of the spirit of the salary cap. They attempted to take advantage of a one-year loophole, and quite frankly, I think they're lucky they didn't lose draft picks."

DRAFT PICKS!? Remember when the Mara, err, I mean the NFL almost tried to void the RG3 trade because they wanted to take our draft picks away-- for violating the spirit of an uncapped, lawless year?

Again, I’m not a conspiracy theorist, but this stinks of a jealous owner too close to the guy at the top. 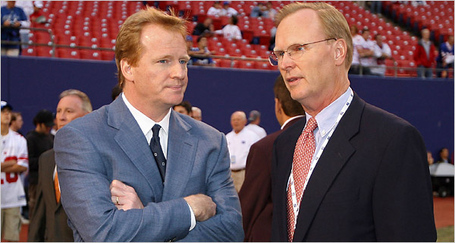