Last Saturday, as part of the Redskins "Homecoming Game" vs the Panthers, the Redskins held several events around the city, including a lunch with Sean's Dad, Pedro "Pete," where I got the chance to talk and interview him. Also there was Pete's son, and Sean's brother, Gabriel, who is as nice and humble as can be. Much of the buzz of the afternoon was how good Gabriel is and that he has highlights on YouTube. Indeed. And they are quite amazing. Reportedly (I don't buy this for one minute), Shanahan only cares about a prospect's 10 best plays, so Gabriel would fit that nicely. If only the NFL draft was like Major League Baseball's the Redskins could draft the rights to him now.

Gabriel Taylor #21, safety for the Florida City Razorbacks 90's was selected as the Miami Dolphins Youth Player of week. With a key interception for a touchdown, Gabriel sealed a victory against the Gwen Cherry Bulls in the Championship game.

Here's video of Gabriel for both basketball and football. At the 3:05 mark shows him swishing a NBA three pointer and game film begins of all his point guard dishing. He's clearly playing against kids bigger than him and likely older than him.

At the 7:30 mark, the football highlights begin from his 90 pound league. They're all very Sean Taylor-esque. Out-juking players as a RB, great jumps on interceptions, tackling guys bigger than him, and some big pops.

A Redskins fan with Gabriel throwing up the "21" hand sign in D.C. last weekend.... 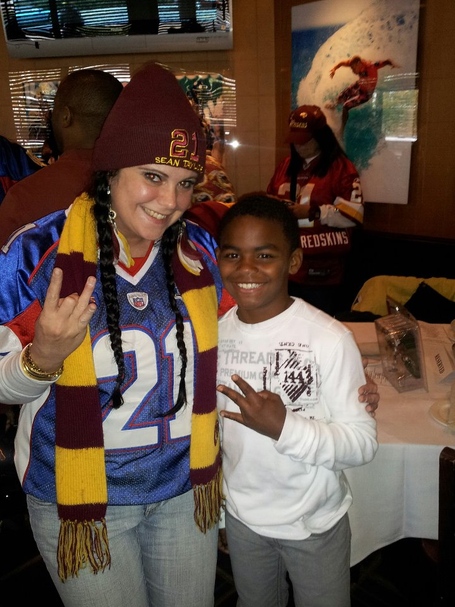 *Editor's note: This article was published 2 years ago, and has been republished today following the debut of Sean Taylor: A Football Life on NFL Network last night."