Very few wide receivers in the NFL enjoy running across the middle of the field due to the increased likeliness of a big hit from a safety. Is there a way that quarterback Robert Griffin III help eliminate that threat of a safety landing a big hit?

One of our frequently used and most successful plays forces a receiver to break inside up the seam, opening him up to a big hit from a safety. Here's the play I'm talking about it, we've seen this or variations of this every week. 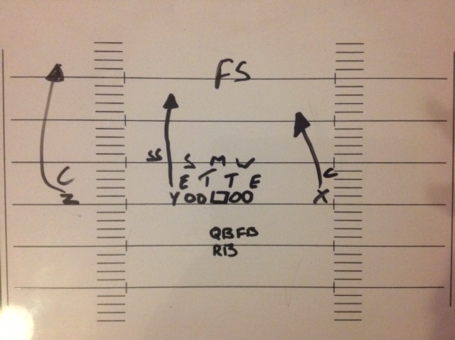 More often than not, the defense will be playing either single high safety, or cover three against this look. The X receiver is the first look and is open just about every play. Every linebacker bites on the play-action in the backfield, opening up the field behind them. As soon as the X receiver breaks inside slightly, Griffin has a window of opportunity to throw.

Now the problem with this play is that teams have seen it on film for nine games now. The free safety in the middle of the field is biting down as soon as Griffin even raises his arm to throw the ball. Usually the safety is too deep to intercept or break up the pass. But he can close quick enough to lay out the receiver a split-second after the ball arrives, as Josh Morgan found out a couple of times this past Sunday. 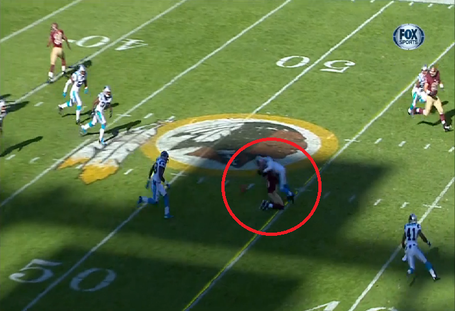 With the free safety biting and delivering huge hits like this one, it's tough for receivers to hold on to the ball. Morgan didn't manage to on this play, but he has on a couple of other occasions. But there's no way a receiver can continue to take these kind of hits on a consistent basis. So should the Redskins stop running this play? Not exactly.

I think this has now been set up to break a deep touchdown pass. With the free safety biting almost every time Griffin begins to throw, he opens up other routes to run by him. Have a look here. 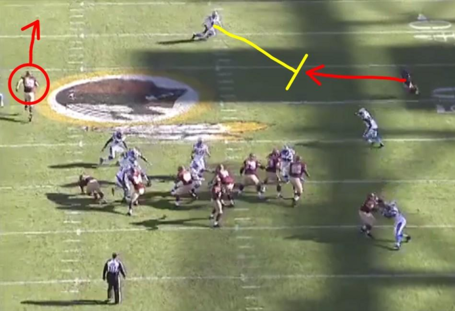 You can see Griffin begin his throwing motion and the free safety is already biting down to try and land a big hit. If Griffin can pump fake or just look off the safety, then he has tight end Logan Paulsen running right up the seam for a possible touchdown.

I think its vital that Griffin starts to pump fake and look off safeties for plays like this to continue to work. And just for the safety of his receivers in general. It only takes one play to burn the safety, then he'll back off and open up the middle of the field again. Then maybe we can see more plays like the Garcon catch and run touchdown against the Saints back in week one.