I've been breaking down all of Robert Griffin III's touchdown passes against the Cowboys over the last day or so. Previously I broke down the 68 yard pass to Aldrick Robinson and Pierre Garcon's 59-yard touchdown reception. Next up is The 29-yarder to tight end Niles Paul. This play came after a horrible spot by the referee, leaving the Redskins with a critical third and short situation. They set up in the 'I formation' from their 'U' personnel group (two tight ends, two running backs and just one receiver). 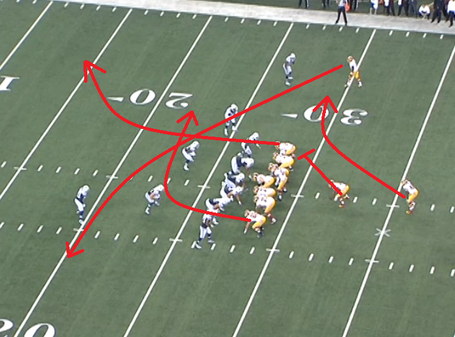 Niles Paul is the tight end to the right of the offensive line running a corner route. Logan Paulsen runs a crossing pattern from the other side of the offensive line, while Aldrick Robinson also runs across the defense. In the backfield, the Redskins run a play-action fake. Fullback Darrel Young acts as a lead blocker and running back Alfred Morris trails behind him before breaking out into the flat as a check-down option. 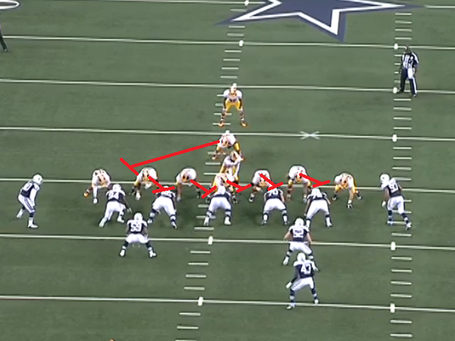 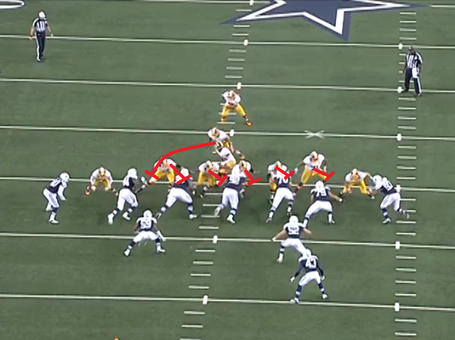 Young has a crucial block on the Cowboys best pass-rusher (and best player) DeMarcus Ware. But we'll come back to this in a moment. 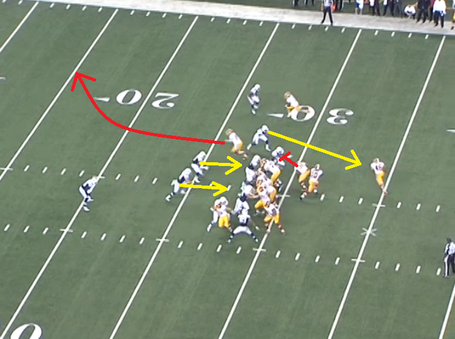 As Griffin fakes the hand-off, you can see the Cowboys defenders biting heavily on the run. It is a Redskins third and short after all. You would think that the number two ranked rushing attack in the NFL would probably look to run. But already you can see Niles Paul running free. 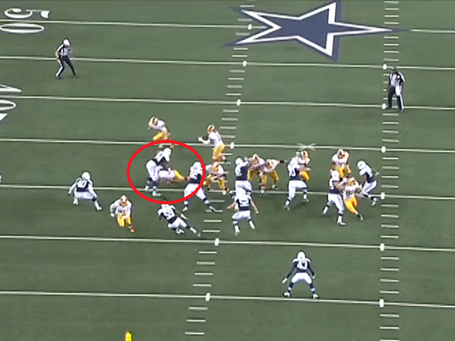 Back to that Young block. Ware is left unblocked by the offensive line as they slide left. Young comes up and displays a perfect cut-block. 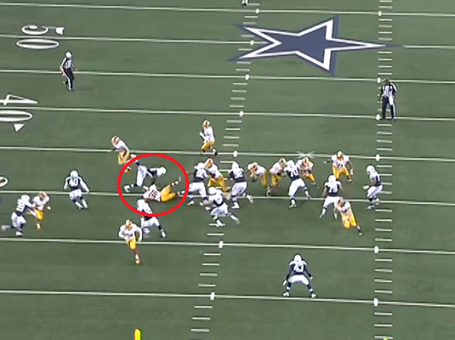 Ware cannot avoid it and his rush is delayed. 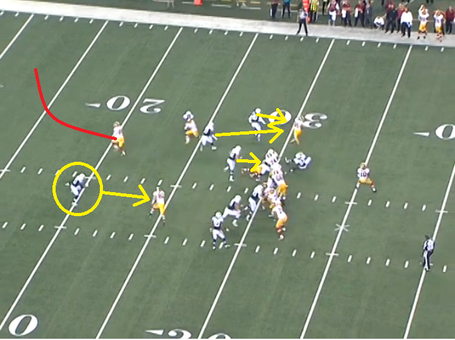 So caught out by the play-action, the Cowboys end up having two linebackers cover Morris on the check-down option in the flat. Maybe they thought it was the Spider 2 Y Banana play that Young scored a touchdown on against the Eagles, and admittedly it's very similar. But that play has the fullback running into the flat while the running back takes the block. In this play it's the other way around.

With the linebackers committed to the run, the Cowboys free safety is left with an impossible task. He has to either attempt to catch up with Paul or cover Paulsen's crossing route. Either way, someone is open.

Now here is one of the most impressive parts of this play. Griffin hesitated before he threw the ball to Paul. I was wondering why he would hesitate when Paul was so open and pressure was coming, until I saw this angle. 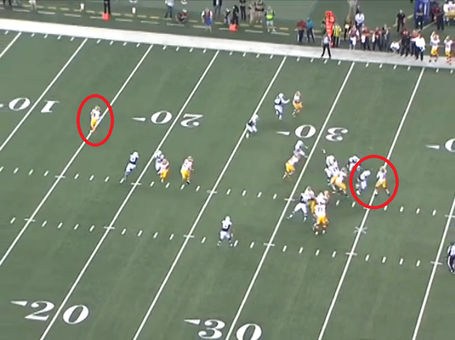 I believe Griffin was waiting for Paul to turn his head to the ball. Paul has had a couple of drops this season and has rarely looked confident in making his catches. I think Griffin wanted Paul to see the pass all the way from the release into his hands, giving him the best chance of making the catch. Griffin did this knowing that he was about to receive a hit from a Cowboys defender, yet waited that extra second longer to help out his tight end. That is a sign of true selflessness, leadership and maturity from a 22-year-old rookie quarterback. Needless to say, Paul caught the pass (just about) and scored. Touchdown Redskins!