The Redskins went back to basics in the red zone against the Eagles with a classic west coast offense play: "Spider 2 Y Banana".

In the weeks leading up to the bye, the Redskins had been struggling to convert red zone trips into touchdowns. They started the year fantastically using Robert Griffin III's ability to run to convert, but teams started to clue onto it. Yesterday, the Redskins went back to a west coast offense classic, Spider 2 Y Banana. You might remember this from Jon Gruden's QB Camp with Andrew Luck. It's a concept that has been around for years, but is mightily effective.

They start by lining up fullback Darrel Young at wide receiver. They then bring him in motion to join the formation. 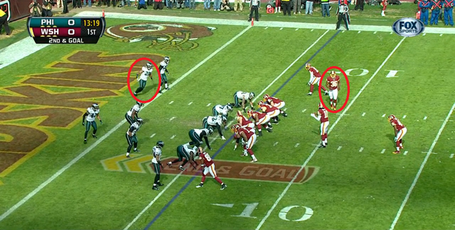 With Young in position, we can now see the design of the play. 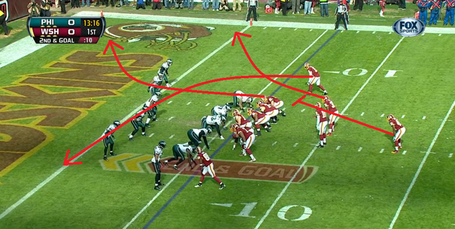 They key to the play is the fake in the backfield. It's designed to look like a hand-off to Alfred Morris with Young as his lead blocker. But what actually happens is that Young sneaks out into the flat while Morris takes his block. Also important to note are the routes of tight end Logan Paulsen and receiver Josh Morgan. Paulsen's route is the 'Y Banana' part of the play call, while Morgan is running a crossing route. 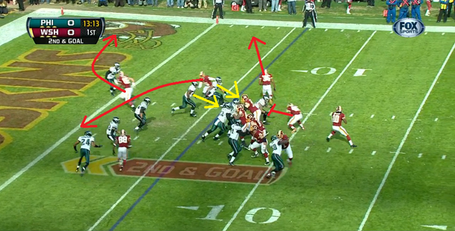 The Eagles defenders bite down on the run fake, allowing Young to sneak out into the flat. Logan Paulsen is also uncovered as Eagles corner Brandon Hughes is trailing Morgan's crossing pattern. 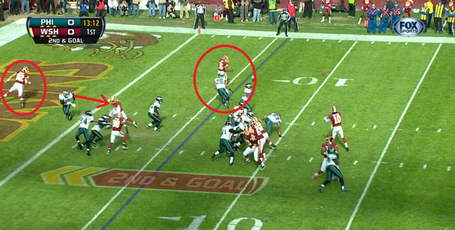 Nate Allen is too slow to recognize the play. Once he does, it's too late and Young is wide open. But even if Allen had covered Young correctly, look at Paulsen in the end zone. He's wide open!

While I have loved watching the 'east coast offense' evolve over the course of the season, it's fantastic to see a traditional west coast offense play incorporated and used successfully. The more plays we have to run in the red zone, the more success we'll be at converting red zone trips into touchdowns.