It's no secret the Redskins defense has been poor this season. It came to attention more so this week against the Steelers than any other because of the lack of production from the offense. Defensive coordinator Jim Haslett is taking a lot of heat right now, but is it merited?

Share All sharing options for: 2-4-5 Defense Package Being Exploited By Redskins Opponents?

Redskins head coach Mike Shanahan said this week that he was happy with how the defense was being prepared each week and that injuries to starters certainly haven't helped. While injuries to guys like Brian Orakpo and Adam Carriker haven't helped, every team suffers from injuries. This is the NFL, you have to be able to cope once players start to go down.

As for the first issue, I'm not sure how he can be happy with the defensive preparation each week given how they've preformed this season. We've already heard stories about how the players weren't at all aware that Mohamed Sanu could throw before that huge touchdown pass and Ken's source telling us that Raheem Morris called plays instead of Haslett in the fourth quarter of the Rams game.

On top of those stories, every week we hear how the opposition knew what the defense was going to do in certain situations. Going back to that Bengals game, the reason Sanu was even given the opportunity to throw the ball was because the Bengals offensive coordinator Jay Gruden stated that he knew the Redskins played a cover-0 defense every time they saw a wildcat look. Last week Eli Manning explained how he said he had a good idea what the Redskins would do defensively on that 77-yard touchdown pass to Victor Cruz. Clearly the Redskins defense has become somewhat predictable in its approach to the game.

The Steelers went to town on our defense this past Sunday. They appeared to deliberately spread out the Redskins defense with multiple wide receiver sets to bring out Jim Haslett's 2-4-5 sub-package. That would be two defensive lineman, four linebackers and five defensive backs. Every time this group is sent on the field, the Redskins almost always send a four man rush (two linebackers and two defensive linemen) while dropping the rest into a zone coverage. The Steelers knew this and took full advantage. On their second quarter touchdown drive, they ran a no-huddle offense to keep this 2-4-5 package on the field for as long as possible.

On that drive, the Steelers went from their own 45 yard line, to the Redskins seven in all of three minutes. It took them six plays, and Ben Roethlisberger went 3/4 for 41 yards and had a pass dropped. The problem from my point of view wasn't just the coverage. It was the amount of time Big Ben had to pick apart the zone coverage. 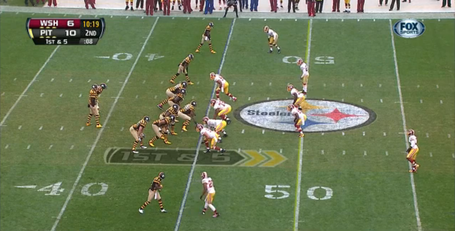 This is the first play that the Redskins run the 2-4-5 defense on this drive. It looks a lot like a 4-3 nickel defense, and essentially it is. But just about every time the Redskins ran this package, they left the front four to try and bring pressure without any schematic help. They never once ran a stunt, or blitzed a fifth or even sixth player. They just left four guys to try and beat a six man protection scheme. Now is that impossible to do? Of course not, but in a sheer game of numbers, you'd expect six guys to be able to block four. Lets have a look at how the front four managed this play. 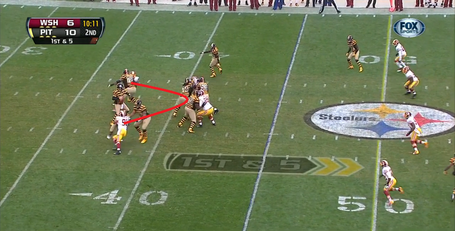 Ryan Kerrigan is the only one remotely close to pressuring Big Ben before the ball is thrown. For the record, the ball was on target and Mike Wallace dropped what would have been a first down.

The Redskins show the same look and give up a first down after a couple of run plays. Then the Steelers drop back to pass again. 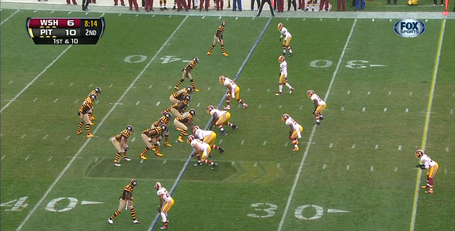 Again the Redskins are rushing just the front four. 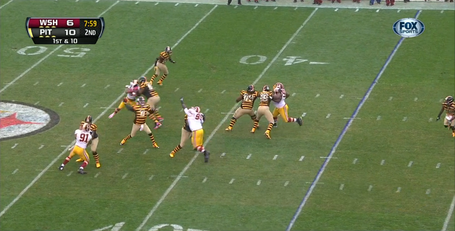 Big Ben has a completely clean pocket to stand and throw a strike downfield from. He does just that and picks up a 17 yard gain on the play.

Steelers are still in no-huddle mode. 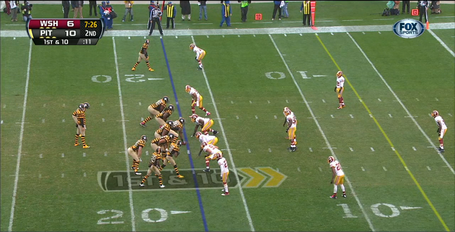 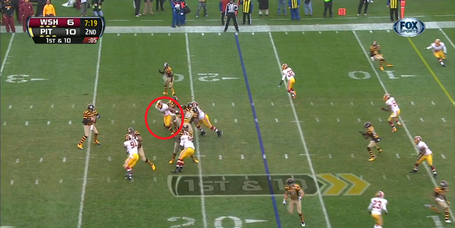 This time, the Redskins manage to get some pressure on Ben, but its not quick enough. The ball thrown before the hit occurs and is caught for another first down.

Roethlisberger took the Steelers 48 yards in about three minutes with relative ease. Only once was he pressured. The 3-4 defense that the Steelers themselves use is designed to bring plenty of pressure and force quick (often bad) decisions by opposing quarterbacks. But instead of using the Steelers 3-4 defense, Haslett changes to this 2-4-5 package and goes extremely conservative.

You can point to the injuries of guys like Orakpo, and sure, he would definitely perform better than anyone else we have in this package. But as I said earlier, everyone gets injuries. In my opinion, it's down to the coordinator to be able to get creative with ways to generate pressure within his scheme to help cover up the loss of injured players. Instead we rely on a standard four-man rush without a single stunt. Not to mention that against the no-huddle, we can't even sub out the defenders to freshen up those four rushers.

In today's NFL, you cannot be predictable or you'll be run over. Right now, that's exactly what's happening to Jim Haslett's defense. Unfortunately, until the Redskins are either able to come up with a perfect coverage scheme (never going to happen) or some inventive blitz packages, then we're going to continue bending and breaking.