All-22 Film Study: Redskins Game Planning vs the Falcons

After studying the Falcons defense on film against the Panthers, Broncos and Chargers, I give my thoughts on what the Redskins are likely to see this Sunday and how they can attack it.

Share All sharing options for: All-22 Film Study: Redskins Game Planning vs the Falcons

The Washington Redskins host an unbeaten opponent in the Atlanta Falcons this coming Sunday. At 4-0, the Falcons look like early contenders. Their offense has been explosive, but perhaps that has covered up some vulnerabilities on the other side of the ball.

In the run game, the Falcons like to shift their defensive lineman around just before the snap to throw off the blocking assignments, as seen here against the Broncos. 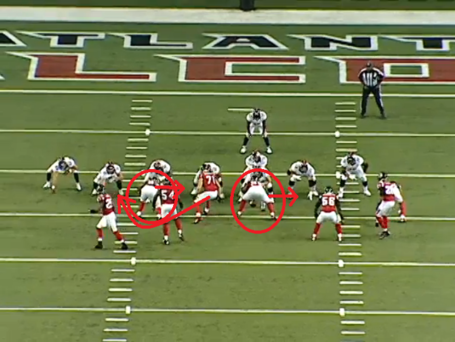 Atlanta gives a 3-4 look here, with a defensive tackle lined up over center just like a 3-4 nose tackle. 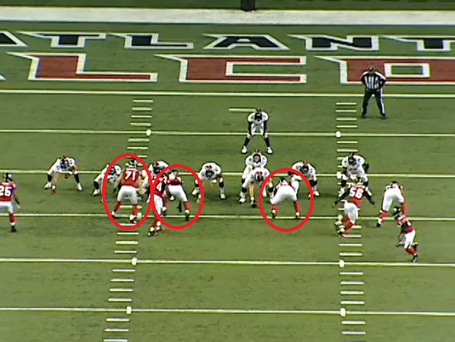 But just before the ball is snapped, the two defensive tackles shift inside back into their 4-3 base front. The ball is snapped just after this picture, not giving the Broncos enough time to adjust their blocking assignments. The play results in a two yard loss.

Fortunately the Redskins run a zone-blocking scheme, as I'm sure you've all heard about before. These kinds of shifts don't have quite the same impact on a zone scheme as they do on a man-blocking scheme. Outside of these shifts, Atlanta play the standard run game fairly straight up. So lets move on to the passing game.

Now the Falcons aren't a team that like to blitz a lot. I can only remember twice in the Panthers game that they sent more than five rushers. Neither play paid off for them. 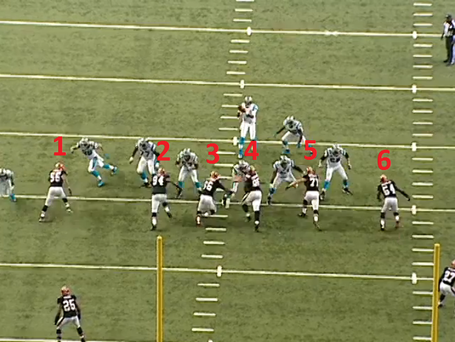 Atlanta are backed up in their own half here. They decide to blitz with six rushers, playing man coverage behind it with a single deep safety. 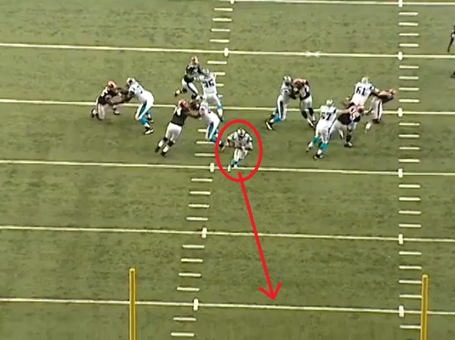 Newton eludes the pressure and escapes the pocket up the middle. He takes the ball 15 yards down to the Falcons own five yard line before he's tackled.

Later in the fourth quarter, the Falcons send seven on an all out blitz. 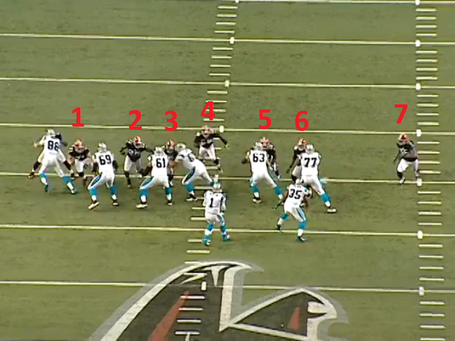 Atlanta brings one more defender than the Panthers can block. 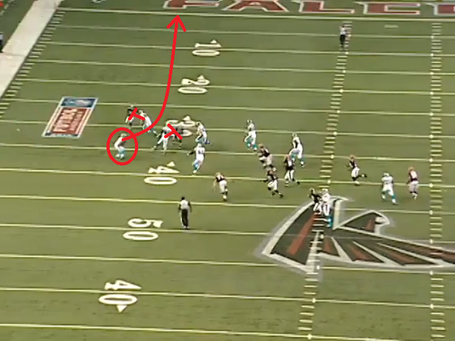 But the pressure doesn't get there quick enough. Newton gets the pass away on a receiver screen. Carolina block it well, and with no safety help the receiver has a free run into the end zone for a 36 yard touchdown.

Naturally, with a lack of success sending blitzes, Mike Smith and his Falcons choose to play safe coverage instead of heavy blitzing. Usually you'll see four rushers with a 'Tampa 2' or 'Cover 2' coverage scheme behind it. At times Atlanta will bring five rushers, with 'Cover 3' behind it. This is pretty similar to what the Redskins saw just last week against the Tampa Bay Buccaneers, which is useful because the Redskins can recycle some of their Tampa/Cover 2 breakers from last week. Here's a couple of examples. 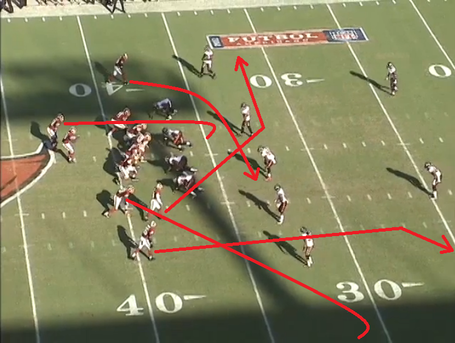 I like this play because it manipulates and attacks three vulnerable spots in the Tampa 2 defense. The crossing route from the top receiver comes right underneath the middle zones of the defense. Santana Moss is crossing back the other way, creating a natural 'pick' as its called in the world of basketball. Leonard Hankerson runs a corner route, splitting the gap between the outside corner and the safety over the top, while Fred Davis runs out to the sidelines and sits down outside the zone. The corner is forced to choose to take away the deep throw, leaving Davis wide open underneath. 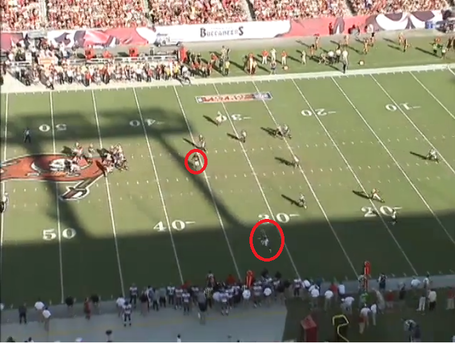 Robert Griffin III has the choice of the crosser in the middle of the field, or Davis on the sidelines. He chose the latter and picked up solid yards. 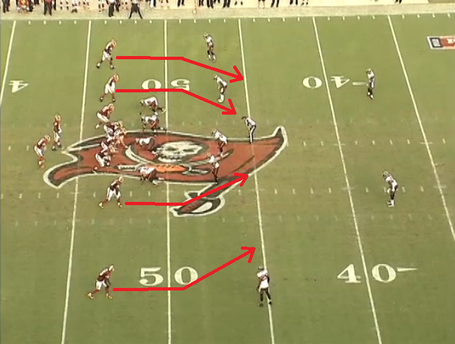 The Redskins run four slants. The slants attack the seams in between each zone, making it very hard to cover each route. 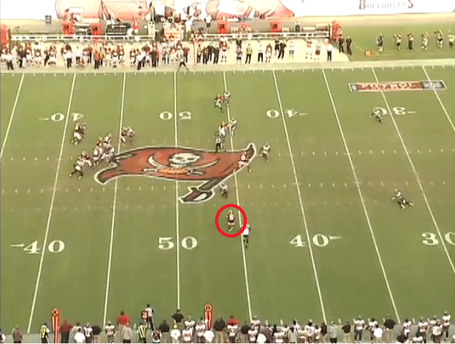 Griffin fires a bullet to Joshua Morgan, who picks up 13 yards and a first down.

One final Tampa/Cover 2 beater I liked against the Bucs involved two in-breaking routes on the same side. 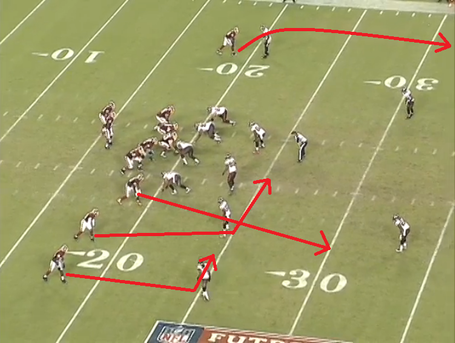 Moss and Hankerson are both going to break inside, but the key to the play is Fred Davis running up the seam. 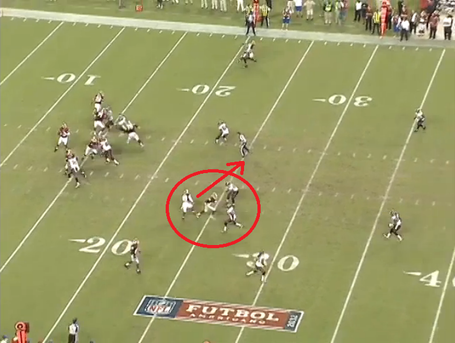 Davis is the immediate vertical threat, thus both linebackers are occupied by his presence. Moss cuts in underneath Davis and has a hole to run into. He manages to make the catch before the middle linebacker peals off Davis and makes the tackle.

One thing I noticed the Panthers did well against the Falcons was manipulate the match ups in their favor. They would use personnel groups with just two receivers to bring the Falcons base 4-3 defense onto the field. But Carolina would then line up both receivers to one side, with the Z receiver in the slot. 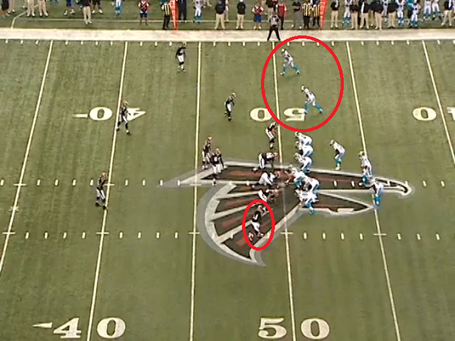 This is one of the Panthers first offensive plays of the game. Atlanta opts to leave the corner on his own with outside containment assignment rather than move him over to cover the Z receiver on the far side. 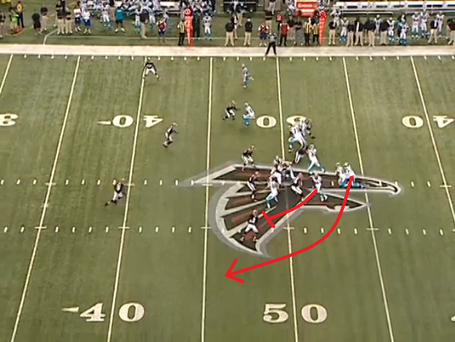 Newton keeps the ball on an option run. The cornerback is easily blocked by the extra tight end, leaving a huge area of field for Newton to run into. 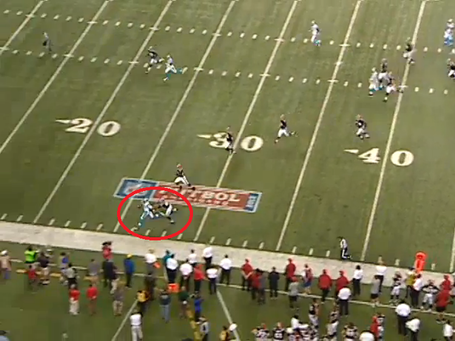 Newton is only just pushed out of bounds after a 30 yard pick up. I'd put money on Griffin out running the safety in the open field and taking that to the house for six.

Later on the Panthers give a similar look. 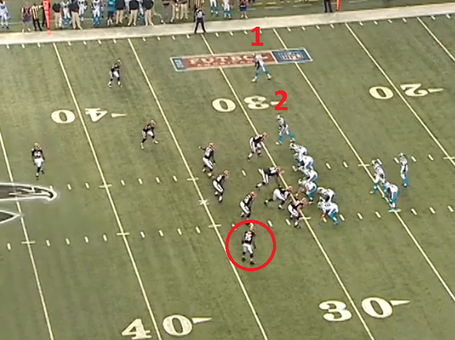 This time the Falcons allow the corner to mirror the receiver, bringing down a safety to contain the backside. 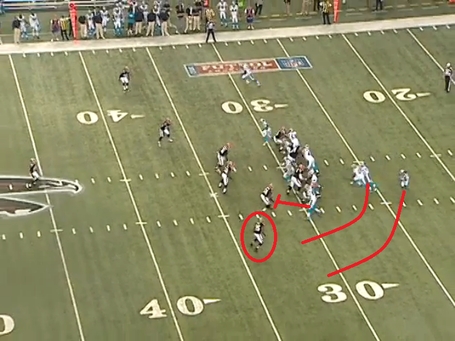 On this occasion, Newton hands it off inside. But had he kept it, he had a two on one match up against the safety. Having seen this, if I'm the Redskins I'm trying to exploit this with the option run game. I'd look for a lot of two receiver sets with two backs and a tight end in order to force the Falcons base personnel on the field. We've seen the Redskins run both of these two plays in their option game, so there's no reason for them not to try them out against the Falcons.

Carolina eventually evolved those match up problems. The Panthers would use the same theory, two receiver sets with the Z receiver in the slot and force the safety on the backside. Then they started to line up the tight end outside against the safety. 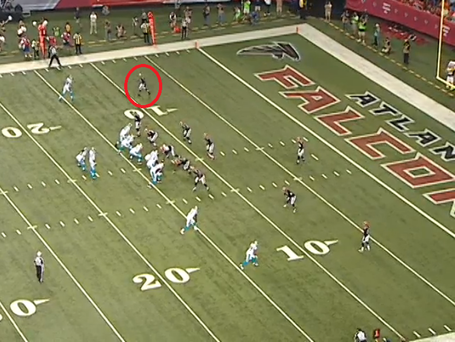 The safety circled above is completely on his own. He has no help whatsoever. If Newton had wanted to, he could have audibled to a fade or a slant against that safety, and probably would have had a touchdown. 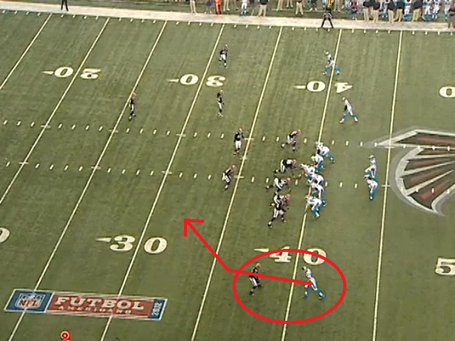 This time the tight end runs a slant. The safety has no help and Newton completes the pass and picks up the first down before the other safety can come across to make the tackle. I can see Davis being extremely effective on an island against a safety, and wouldn't be surprised to see the Redskins exploit this throughout the game.

As mentioned earlier, the Falcons don't like to send pressure. As a result, the quarterback will usually have time to stand in the pocket and go through his progressions. Griffin absolutely has to keep his poise and composure while waiting for routes to develop. Last week Newton got happy feet and took checkdowns when he had options open down the field. 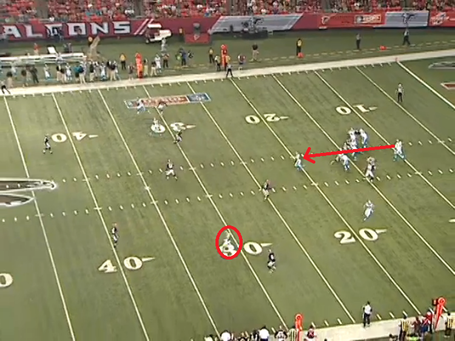 Newton has a post route that finds a hole in the defense. But instead he takes the checkdown option to the running back who is brought down for minimal gain. 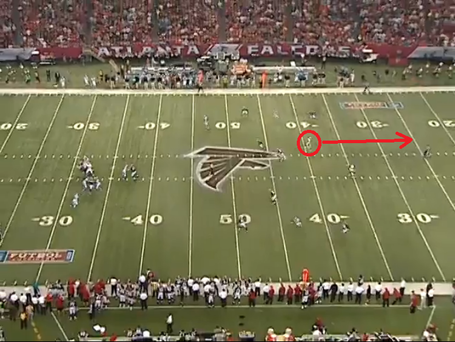 On this play, Newton has his tight end running straight up the seam between two deep zones. Newton instead felt imaginary pressure and scrambled for a five yard gain. 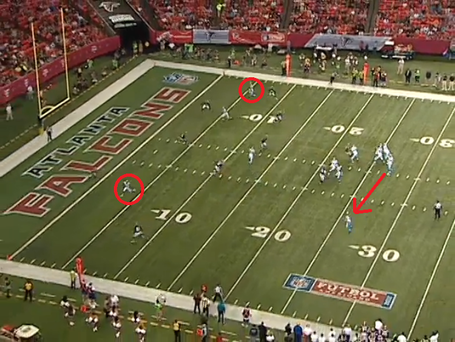 This is the worst play of the lot from Newton's point of view. He has two touchdown passes available and doesn't even check them. Were they difficult throws? Sure. But at the NFL level, that play should have been a touchdown, or at least first and goal. Newton dumps it off to the running back who is brought down short of the first down marker.

This tells me that if Griffin is patient and poised, he'll have plenty of opportunities to complete intermediate to deep passes on this Falcons defense. And judging by our secondary at the moment, we'll need to be able to complete deep passes and score points to keep up with the Falcons offense.