Tampa Bay saw success with a particular defensive scheme against the Panthers option run game. The Redskins found a hole in that scheme and exploited it to the result of two touchdowns.

Share All sharing options for: Game-planning and preparation pays dividends for Kyle Shanahan and the Redskins

After losing to the Cincinnati Bengals, multiple Washington Redskins players complained about not knowing of Mohamed Sanu's throwing ability in college after his 73-yard touchdown pass on the first play of the game. But the same couldn't be said of Redskins this week, certainly not on offense. Kyle Shanahan and his staff did their homework on the Tampa Bay Buccaneers defense; taking advantage of one particular front they saw on film from the Bucs week one match up against the Carolina Panthers.

The Panthers are one of the other few teams in the league that run zone-read and other option style plays that the Redskins have incorporated with rookie quarterback Robert Griffin III. The Buccaneers play in the same division as the Panthers and having witnessed these types of plays before, came up with solutions in effort to stop them. Here was one of them. 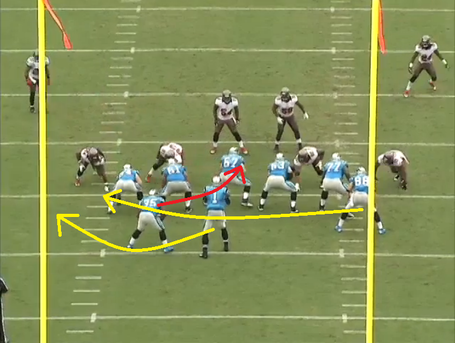 The Panthers are looking to run a read-option play. Newton is to read the defensive end on the left side and make his decision to hand-off or keep the ball based on the end's reaction. 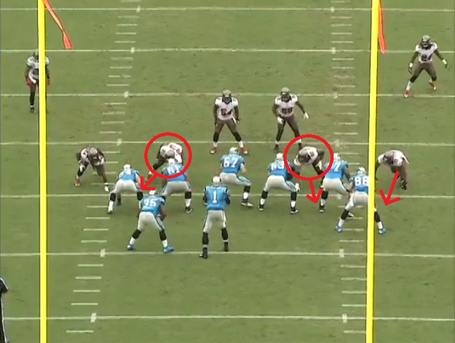 The Bucs recognize this as a potential option play, and shift their defensive tackles wider marginally before the snap. This lengthens the gap between both tackles. The tackle on the left of the screen is going to draw a double team from the left guard and left tackle, while the right tackle and right guard are also occupied with defensive lineman. 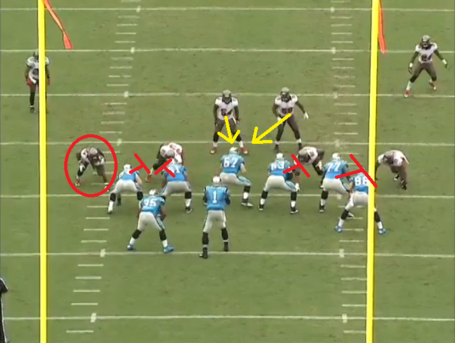 The blocking works roughly as shown above. The defensive end is left unblocked by design. He is assigned with containing the outside run and forcing the play inside. With that accomplished, the Panthers are trapped. Ideally on an option run, you are able to hand the ball off inside without having to block a defensive end. But the Buccaneers have worked a clever scheme together. They tricked the Panthers to hand-off the ball inside. The center is the only man free to move up to the second level, while the Bucs have two linebackers in position to stop the run. The Panthers can only block one linebacker, with the other getting a free run at the ball carrier. This play ends for just a two yard gain.

Tampa Bay used this scheme to good effect against the Panthers, neutralizing their option run game. Naturally they believed the Redskins, with similar run plays, would be vulnerable to the scheme as well. But Kyle Shanahan and Robert Griffin used this scheme to their advantage. In fact, they scored two touchdowns against it. 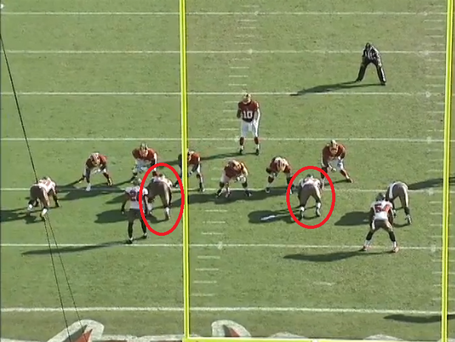 This is the Redskins first touchdown run. Tampa Bay show the split defensive tackles look near their own end zone. The Redskins came prepared. They motion out the running back to an outside receiver to suggest they are going to pass. 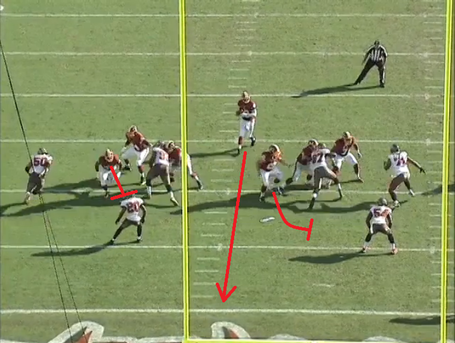 As Griffin drops back, a big hole in the middle of the defensive line develops as a result of the wide tackles. Fred Davis appears to be running a route, but actually is blocking one of the second level defenders. Center Will Montgomery only has one man to worry about, blocking him effectively. Griffin is able to run free up the middle before a defensive back makes the hit on him. We all know that the ball was fumbled and Pierre Garcon recovered it for a touchdown.

Moving on to Griffin's touchdown, and its pretty much the same situation. 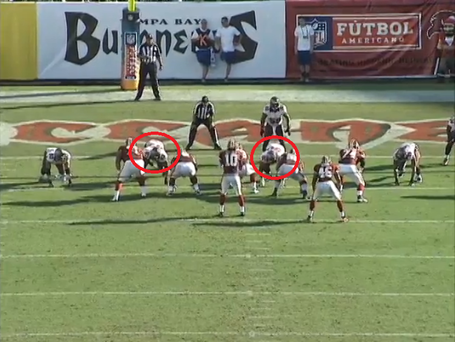 Backed up on their own half, the Bucs show a wide tackle look again. Granted it's not quite as prominent as the previous play, but there is still a fair gap between the two tackles. 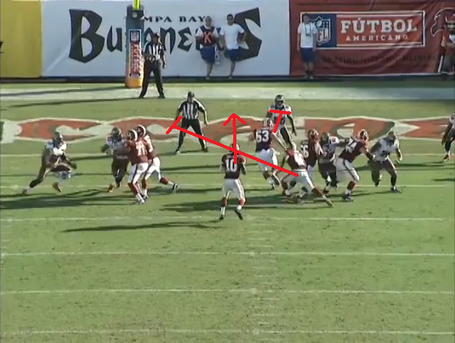 Once again the tackles attack the outside shoulders of the guard, leaving a big hole up the middle. Montgomery is able to get onto the immediate threat, while Alfred Morris is used as a leading blocker to assure Griffin's entry to the end zone.

Full credit is due to Kyle Shanahan and his assistants. They managed to identify one of the schemes the Bucs used to stop the Panthers option run game and came up with a way to defeat it, with touchdowns as the result. To take a strength of an opponent and turn it into a weakness turned out to be a huge factor for the Redskins this week, especially in such a tight game. But what have you made of Kyle Shanahan and the offensive game-planning and playcalling so far? Let me know in the comments below.