With Robert Griffin III at quarterback, Mike and Kyle Shanahan have done an excellent job of incorporating plays from Griffin's option-based offense in college. Here I break down the running game in what Mike Shanahan recently referred to (somewhat jokingly) as the 'East Coast Offense'.

Share All sharing options for: Evolution of The 'East Coast Offense': Run Game

Over the last seven weeks, we've seen a multitude of different option run plays that are being introduced one by one every week. Against the New Orleans Saints in the season opener, we saw the Redskins use the traditional read-option play. 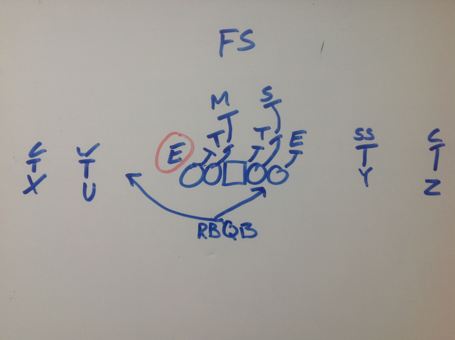 Everyone probably knows this play by now. The Redskins run it every week and it's largely responsible for the success of both running back Alfred Morris and quarterback Robert Griffin III. It's the bread and butter of the offense. In Mike Shanahan offenses of old, we're used to seeing the outside and inside zone stretch play, which we still do. But it has almost been replaced as the main running play by the read-option. The offensive line leave a defensive end unblocked and Griffin dictates the play based on what that defensive end does. If he stays outside on contain, the ball is handed off inside and the running back gets an extra blocker. If the end crashes inside, then Griffin keeps it himself and runs into open field. He did this against the Saints early on to establish a legitimate run threat. 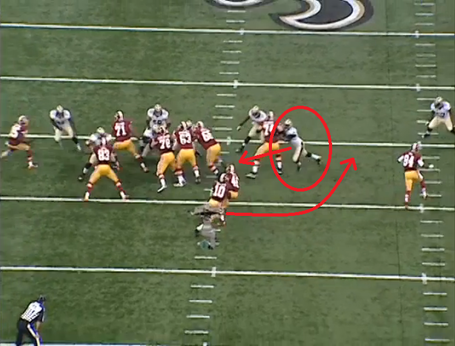 Right tackle Tyler Polumbus left the defensive end unblocked, but the end still crashes inside trying to stop the run. Griffin keeps it and runs into the open field for a nine yard pick up.

Against the Rams in week two, Kyle Shanahan opened up the playbook a little more, showing us the speed option. 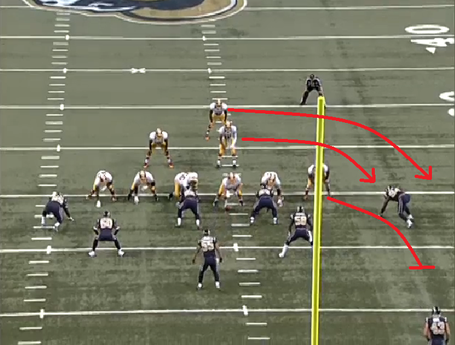 From the snap, Griffin keeps the ball and sprints to the edge. He has an outside runner option to pitch to if and when he needs it. Left tackle Trent Williams will leave the end unblocked so he can get to the second level quicker. 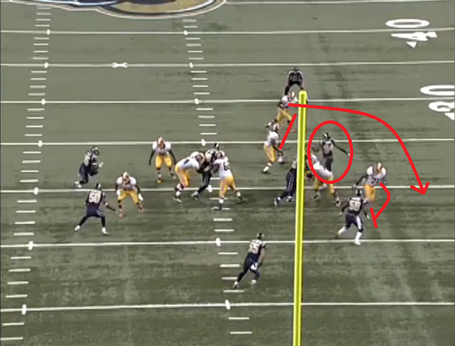 The end attacks Griffin, who is able to draw him in and pitch the ball outside at the last second. You can see Trent has managed to get down the field and is in a great position to cut off a Rams linebacker from making the tackle.

On to week three and the Cincinnati Bengals. This is when we started to see Brandon Banks role in the offense grow. Some people call this play the 'Veer' or 'Inverted Veer'. I called it 'H-Belly' based on a couple of pistol playbooks I've seen. Either way, the Bengals hadn't seen it before and certainly couldnt stop it. 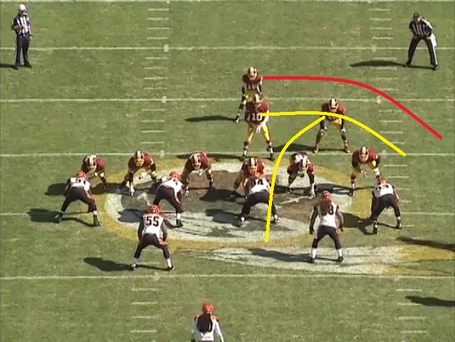 An adaptation of the speed option, Griffin has the option to hand the ball off inside before taking off outside. 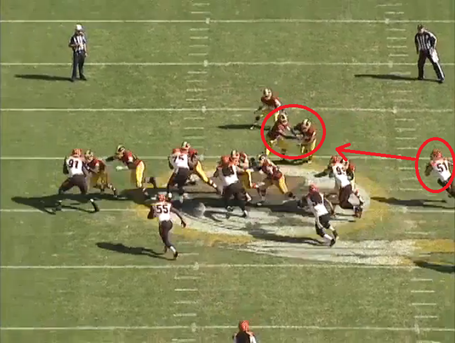 Based on Griffin's read, he pulls the ball and keeps it. 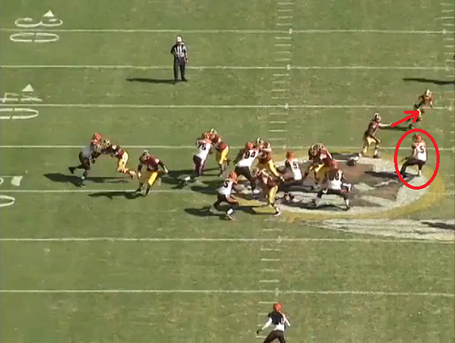 Then, just like with the speed option, Griffin draws in the defender before pitching it out to Banks on the outside. It's an excellent play that forces the defense to cover the entire field. They start running one way to cover Morris inside, and then have to go back outside to cover the run of Griffin and Banks.

When the Redskins traveled down the Tampa Bay to play the Buccaneers, we saw another new look. 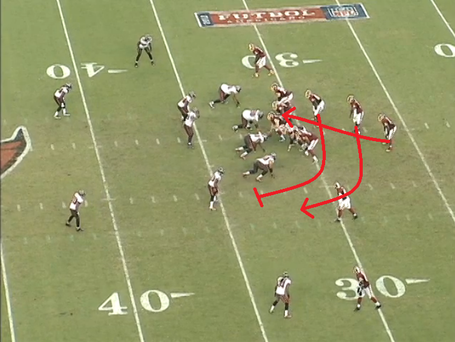 Griffin has the option to hand it off inside, or keep it himself. But the twist on this play is the tight end in the backfield. He runs against the play and either cuts off the backside of the play, or acts as a lead blocker, depending on Griffin's decision to hand off or keep the ball.

The Vikings were on the unfortunate end of seeing two new looks from the Redskins run game. I talked about this one last week. 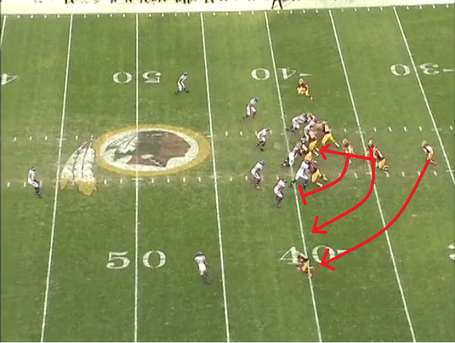 Again, this is an adaptation of the last two plays I just discussed. Griffin has three options on the play. He can hand off inside, keep himself or pitch it outside. But on this play you have the added factor of the extra tight end in the backfield acting as a potential lead blocker for Griffin should he keep the ball himself. You can read my full post on this play here.

But we also saw our first look at the traditional triple option play. 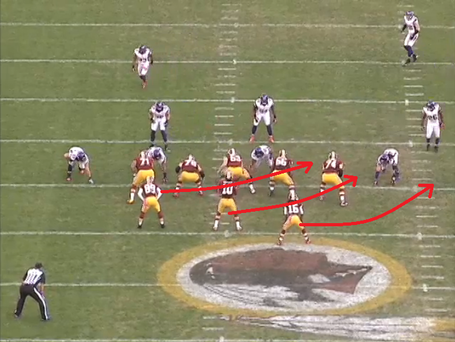 Santana Moss gets his first look from the backfield of an option play. Once again, Griffin has three options on the play, pitch inside, pitch outside of keep it himself. 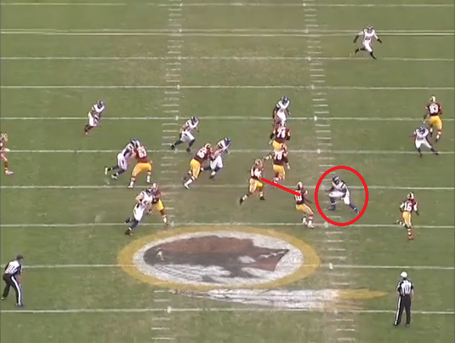 The defender fronts up to Griffin, who elects to shovel pass the ball inside to Moss. Moss picked up a solid five yards on the play, but I speculated on twitter if he could have pitched it back outside to Banks. Look at how it set up for him. 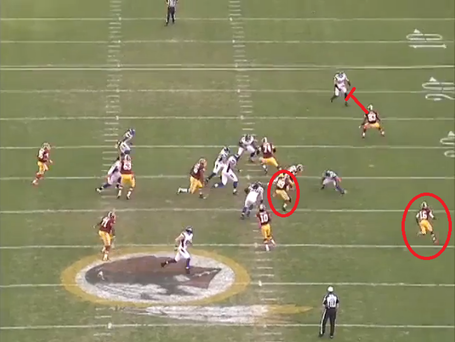 The entire defense bites inside after the pitch to Moss. Fred Davis had a good angle on the safety down the field, and just off screen Joshua Morgan also had a good angle to block a cornerback. Had Moss pitched it back outside, I think Banks would have taken it to the house for six. But anyway, that's off the point of this post.

Even yesterday against the Giants, we showed some new looks. Although it had a lot more do to with motions and personnel, we did actually see a couple new plays. 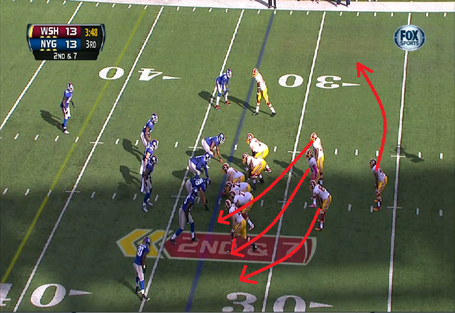 With fullback Darrel Young and tight end Niles Paul joining Griffin and Morris in the backfield, the Redskins can show the Giants a run heavy look. On this particular play, they ran the triple option inside, while Morris acted as a decoy running to the other side of the field. But this wasn't the only play we saw from this formation, 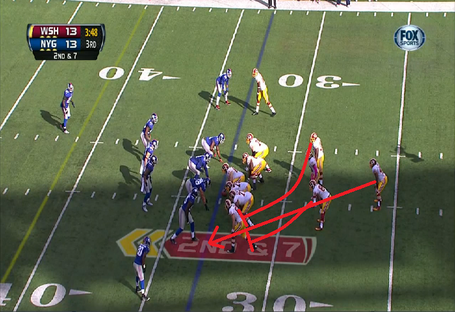 They also used this formation for a power run, with Young and Paul as lead blockers for Morris to run behind.

It will be interesting to see how many more option plays the Redskins have up their sleeves. I certainly don't think they've shown everything in the playbook already. The option game is a huge reason why the Redskins have managed to be in every game right until the end. Many people questioned the longevity and effectiveness of the option at the NFL level, myself included. But the very basic concept of it is sound. It picks certain defensive plays and puts them in a lose-lose situation. So far nobody has been able to find a way to shut it down, which is why the Redskins have the best rushing attack in the NFL through week seven.