Share All sharing options for: 5 Questions with Big Blue View About the Giants OLine and Secondary 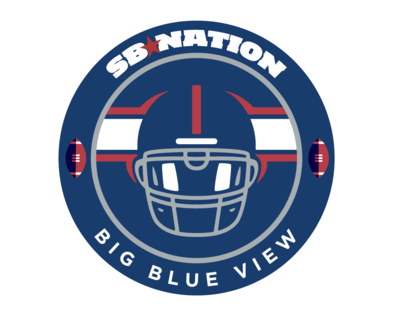 Ed Valentine, the Lead Editor for the Giants' SB Nation website, Big Blue View, talks about weaknesses and how much Giants' fan respect the Redskins and RGIII.

1.) It's quite impressive the Giants have gone 3 games without a sack. Is that more on Eli being so great at pocket presence or is the OLine truly playing great? Are there any weak links Haslett can exploit on the OL?

Big Blue View: It is actually a little of both. This offensive line has been playing extremely well, better than the Giants' offensive line has played in several years. That said, Manning is an absolute master at getting the Giants into the correct play, getting the ball out quickly and sliding ever so subtly in the pocket to avoid pressure that does come. As far as weak links, on paper you would think right tackle Sean Locklear -- a guy I know Redskins' fans are familiar with -- would be a weak link he has yet to surrender a sack while starting all six games this season.

2.) Ahmad Bradshaw has been a beast the last 2 games with a combined 57 attempts for 316 yards. He sat out practice yesterday with a foot injury. What do you expect if he can't go or ends up being limited during the game? (An Andy Reid offense throwing the ball 14/15 plays even if you have a 4th quarter lead)?

Bradshaw is expected to go. Word was he would practice Thursday. He does have a history of foot and ankle injuries so I'm not surprised he needs to back off a little after the workload he has had the past two weeks. Whether Bradshaw is limited or not, backup Andre Brown, who ran for 71 and 113 yards in two games filling in for Bradshaw, is back from a concussion this week and I would fully expect him to take some of that workload. Also, rookie first-round pick David Wilson is eventually going to become a force on offense. The Giants will run the ball, especially if they have a lead. Against San Francisco last week in the fourth quarter the Giants jammed the ball down the 49ers throats with 12 consecutive runs on a drive that went 72 yards and lasted more than seven minutes.

3.) What's the Giants' weakest position group and why? (ours is Safety, obviously).

I really don't know, to be honest, that there is one I would call the weakest. The Giants have been concerned about the secondary (both corner and safety) because of injuries and suspensions but guys keep stepping up. I might say the depth at those two spots is a question.

4.) Are there any Giants fans that think the Redskins can win this game and what's their respect level for RGIII and the Redskins franchise as a whole? Are we getting any respect back?

I think the Giants will win. They are 0-2 in the division and they completely understand that they have to start winning some NFC East games. I doubt we will see one of those 'when will the real Giants show up' kind of games. I will say 31-20, giants. There's no way I can predict RGIII's stat line.

Bonus: Make a bold prediction for something that will happen in the game.

Well, I don't know if it will happen, but after Jason Pierre-Paul's "go the other way" comment for RGIII I really want to see Griffin go JPP's way and see what happens if JPP drills him. We're talking about the fastest quarterback in the league vs. the most athletic defensive end in the league. Fun stuff.

Man...Ed dodged those last two questions like he was in a presidential debate. OK, have at it everyone.