All-22 Film Breakdown: The Threat of Percy Harvin

The Minnesota Vikings have surprised the NFL with their 4-1 start to the regular season. Much of their success on offense revolves around the threat of Percy Harvin. Minnesota use multiple ways to get Harvin the ball in space and let him do the rest. Here we look at a few of those plays.

Share All sharing options for: All-22 Film Breakdown: The Threat of Percy Harvin

Percy Harvin is one of the biggest threats in the entire NFL when he gets the ball in the open field. His speed and explosiveness give him a legitimate ability to take the ball to the house every time he touches the ball. One of the main objects of the Vikings offense is to get him the ball in space, the easiest way to do that is in the flats with end arounds and different screen plays. They've been pretty creative in how they run those types of plays, so lets have a look.

The first play I'm going to show you comes from the Vikings win over the 49ers. 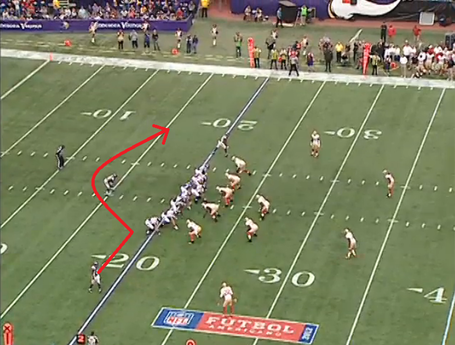 Harvin is going to run what looks to be an end-around hand-off. But in reality, the Vikings fake the hand-off, only to pass it to Harvin seconds later in the flat. 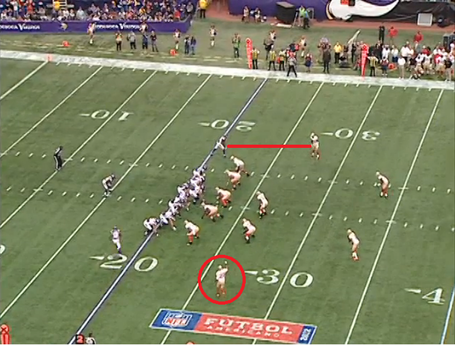 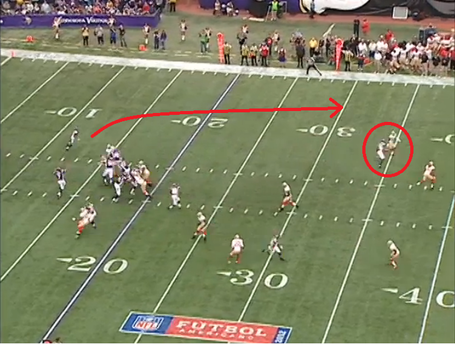 As the ball is thrown, you can see how the confusion in the secondary has created a big area of field for Harvin to run into. This is a nightmare scenario for defensive coordinators. You simply cannot allow Harvin that much room, or he will break one for a huge touchdown.

Credit to the 49ers though, the Vikings run the same play later on in the game. 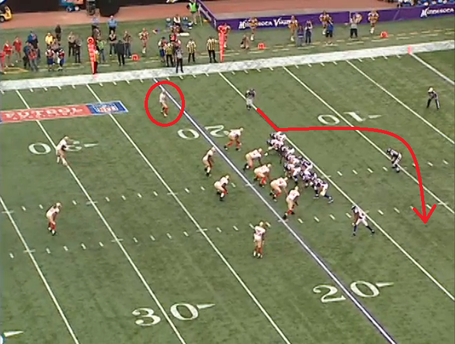 But this time the corner follows Harvin all the way. 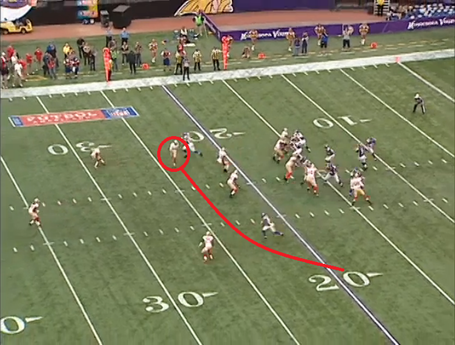 You can see how the corner is mirroring Harvin all the way to the other side of the field. 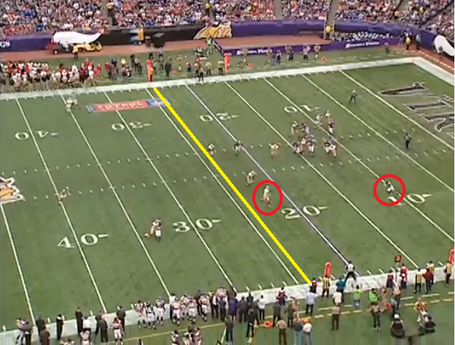 Which allows him, and the 49ers, to be in a much better position to protect the first down marker.

This is one of many reasons I believe we have to go to man coverage against Harvin. You have to able to account for him on every play, and the best way to do that is to have a man mirror his every move. I think, against my better judgement, that DeAngelo Hall is probably the man for the job, because he's the man most likely to be able to keep up with Harvin's speed. We'll come back to this thought, now lets look at a screen play.

Still against the 49ers, Minnesota line up in a bunch trips formation. 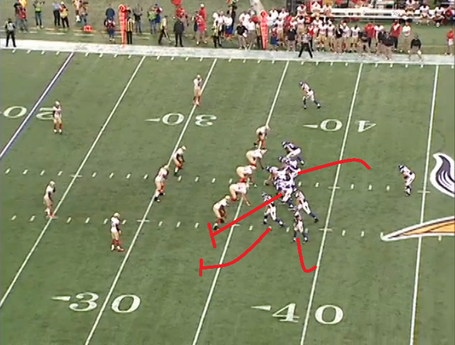 Quarterback Christian Ponder is going to run a play-action fake before throwing the screen. Harvin will drop out into the flat, allowing the other two receivers lined up in the bunch trips to block out in front of him. 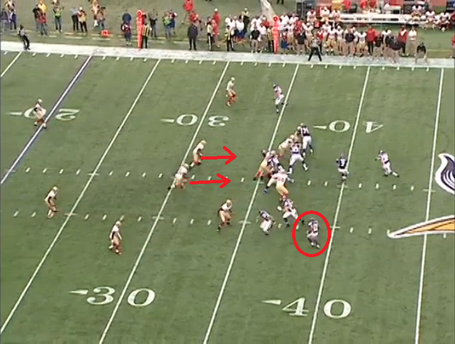 The play-action fake draws in the linebackers, taking their attention away from the screen happening on the backside of the play. 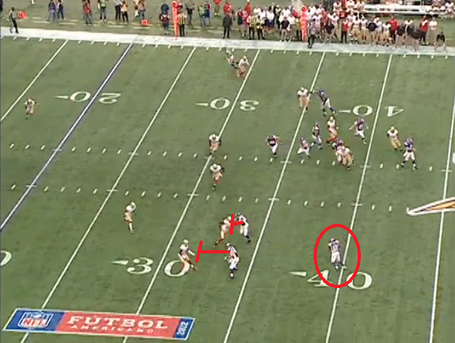 This is the exact look the Vikings want from this play but fortunately for San Fran, Harvin slips and loses his initial burst. He still managed to get eight or nine yards on the play, but it could have been a hell of a lot more had he not slipped.

I feel like if we play man against the Vikings, knowing they like to screen, we can bait them into a screen, and have guys like Ryan Kerrigan and London Fletcher there ready to blow it up. After all, we know Kerrigan can get interceptions on screens into the flat, and that Fletcher is one of the best in the league at recognizing a play early.

Sometimes the Vikings will just check to a quick pass to Harvin if they get a look they like. 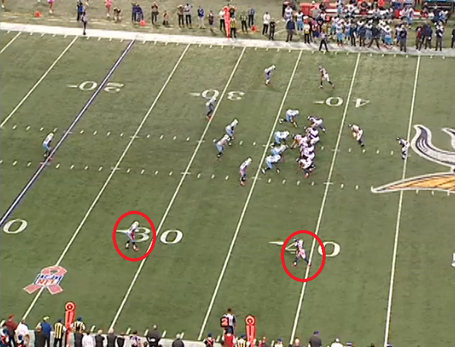 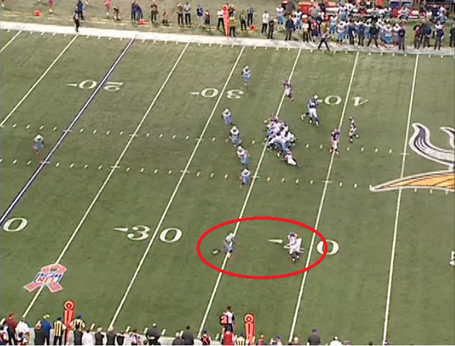 Ponder snaps and throws straight to Harvin as the defender closes the cushion. 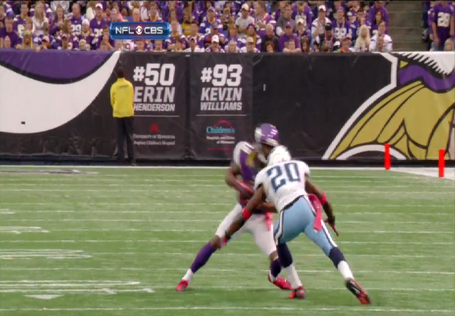 Now one thing the corner absolutely cannot do is take his momentum from closing the cushion and just dive at Harvin's feet. He's much too elusive for that. But what does this corner do? 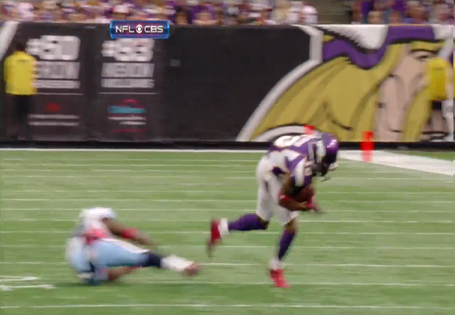 Harvin leaves the corner looking stupid on the floor, while he now has open field to run into.

The bad news is, Hall likes to play off-man coverage so he can keep his eyes on the quarterback. However, the play is a high-risk, high-reward play for the Vikings. If the corner shows good tackling form, Harvin gains nothing from the play. The question is, can Hall show good tackling form? Probably not, but I'd still stick with my theory of Hall in man coverage. Just make sure he has plenty of safety help, just in case. Either way, look for the Vikings to check to this in the red zone if they see one on one coverage. A missed tackle means a touchdown for Harvin in that situation, so it's worth the risk for them.

The other thing we're likely to see is Harvin in the backfield. They do use him as a conventional running back at times, but running between the tackles is not his game, there's no space there for him to explode into. More likely, the Vikings will use outside zone stretch plays with Harvin to set up a pass into the flat. 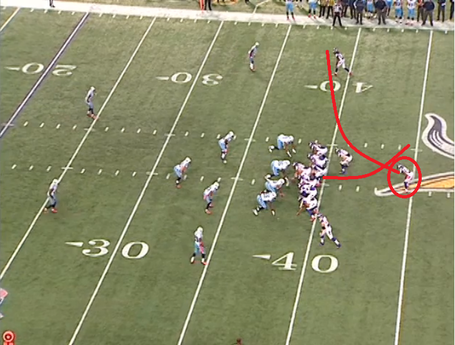 Harvin had a couple of carries against the Titans before this play. Tennessee are ready for the run. 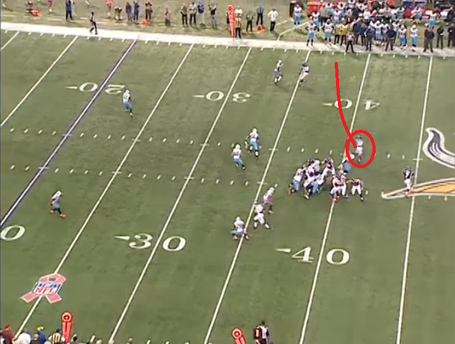 I've suggested throughout this piece that I believe we should be playing man coverage on Harvin. He has to be accounted for on every play, or he will tear us to shreds. The best way to assure he's accounted for is through man coverage, even if it means Hall (with his questionable tackling) has to follow him all game. If the Redskins elect to play zone (which I suspect they will), they must have someone assigned to cover the flats on every play. I mentioned him earlier, but Fletcher is going to be crucial to keeping Harvin and the Vikings screen games in check. He's one of the most experienced players in the league and is quick with his play recognition. He'll need to see the play early and get in a position to either support the tackle attempt on Harvin, or be there to blow up the screen as we've seen him do plenty of times in his career with the Redskins.