The secondary has been at the forefront of the Redskins issues. Their inability to maintain solid coverage has been well documented and is a big part of why the Redskins have lost three games. But it's not just wide receivers the Redskins are struggling to cover, tight ends have done just as much damage.

The Redskins most recent defeat against the Falcons shouldn't really be that much of an eye-opener. The likes of DeAngelo Hall and Josh Wilson did as well as could have been expected against Roddy White and Julio Jones. But the pain in our metaphorical backside was tight end Tony Gonzalez. Gonzalez tore up our defense to the tune of 13 receptions for 123 yards and a touchdown at an average of nearly 9.5 yards per catch. He was a constant outlet and chain mover for the Falcons, effectively negating the efforts of Hall and Wilson.

But as I said, this shouldn't come as a surprise. Tight ends have been picking up consistent first downs against us all year. If my math is correct (and I know, it's questionable...) the Redskins have given up 35 receptions for 367 yards and four touchdowns to tight ends in five games this season. That averages out to seven catches and 73.5 yards per game to tight ends alone. A 10.5 yards per catch average is something no defense can afford to give up to anyone, let alone a tight end. At this rate, the Redskins are projected to give up 112 receptions for 1176 yards and 13 touchdowns to tight ends this season. To give you some perspective on that, only two tight ends would have better that stat line last year, Rob Gronkowski and Jimmy Graham. It would have also equated to the 13th best receiver in the league last year.

So what can the Redskins do to stop this? Well honestly, I'm lost for idea's (albeit I'm not great with my coverages). The Redskins have tried to play man coverage with several players, all of which have failed. 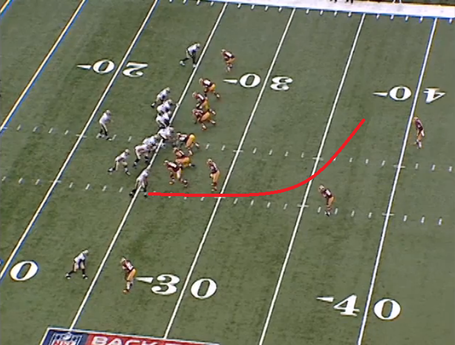 Here is Jimmy Graham lined up one on one with Dejon Gomes back in week one. 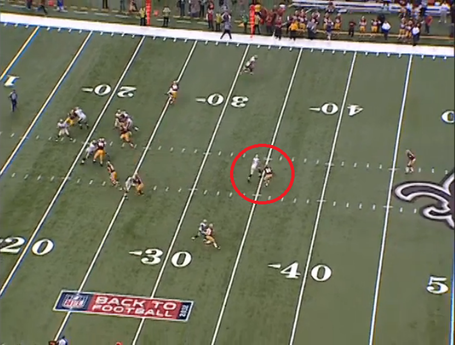 As Graham breaks across the middle, Gomes loses ground. 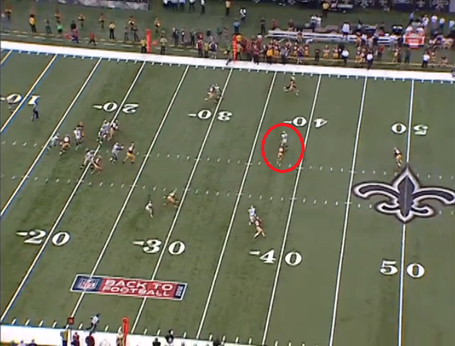 By the time Graham catches the ball, Gomes is two or three yards behind. 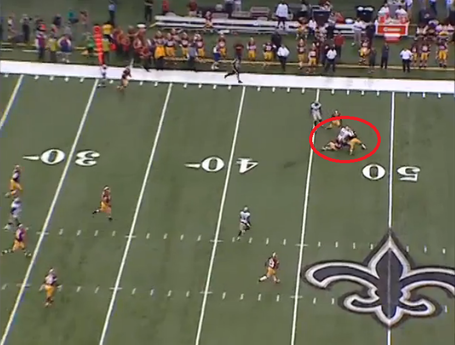 That allows Graham to not only make a big catch for a first down, but to pick up an extra ten yards after the catch.

Against the Bengals, the Redskins tried to put London Fletcher on Jermaine Gresham. 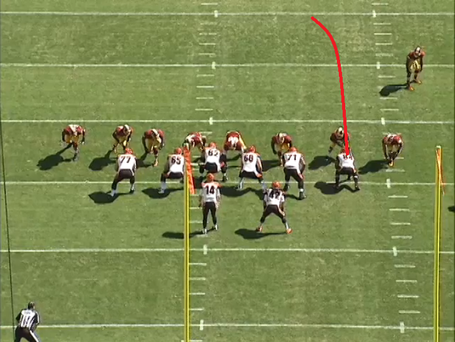 Gresham is going to run straight up the seam before making a slight adjustment to the inside. 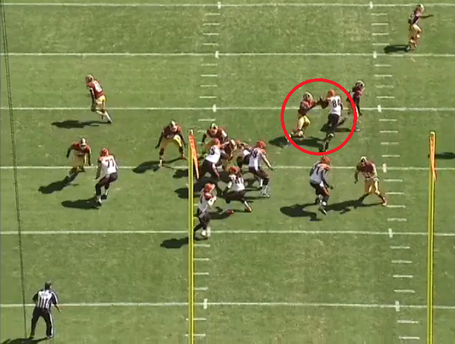 Fletcher struggles to get a jam on him, meaning Gresham is able to run past the 37 year-old Fletcher. 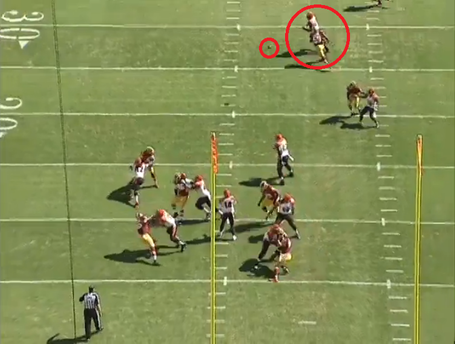 I love Fletcher as much as the next guy. But he just can't keep up with an athletic tight end now. Dalton knows Gresham is going to be open and throws the ball early. Fletcher was beat the moment he failed with the jam.

So the Redskins moved on to Perry Riley, to see if younger legs could keep up with Gresham. 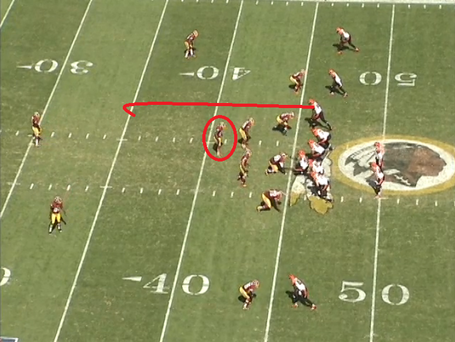 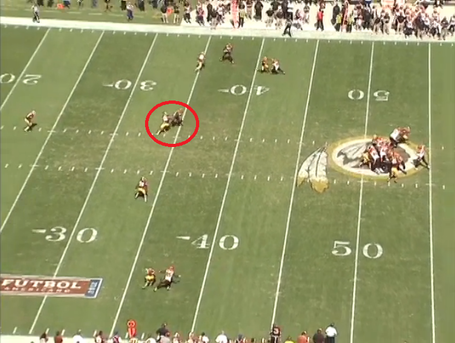 As the cut is made, Riley attempts to hold on to Gresham. 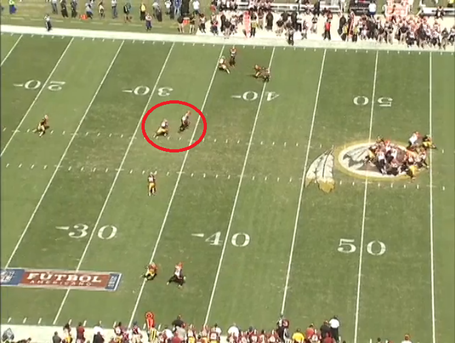 But Riley cant stop his own momentum. Gresham is a yard open, which is enough for Dalton to complete the pass.

Obviously the Redskins struggled to play tight ends in man coverage. The obvious solution is to move to zone coverage, but that didn't work either. 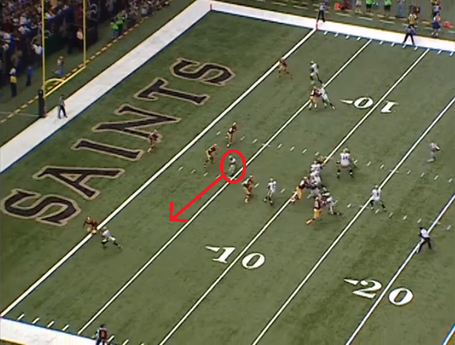 Back to the Saints game, and you can see the linebackers and safeties are sat in a zone coverage. Graham runs underneath the zones into an open gap. 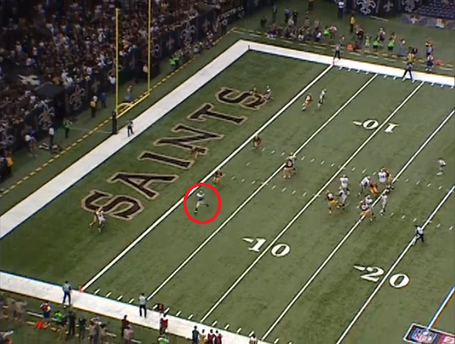 Luckily for the Redskins, Stephen Bowen knocks the pass down at the line. Otherwise, as you can see in the picture above, Graham would have had an uncontested catch and touchdown. 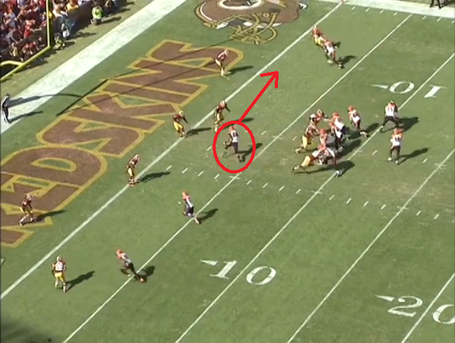 Once again, the tight end crosses underneath the zone coverage. 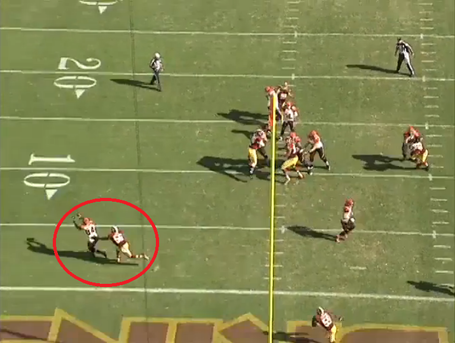 Gresham has momentum as he enters Riley's zone, making it easy for him to run past Riley. Riley is about two yards away from the ball when it's caught by Gresham. He eventually fights through a couple of Redskins tackles and crosses the end zone for a touchdown.

Most recently this past Sunday, Gonzalez was also able to beat zone coverage with relative ease. 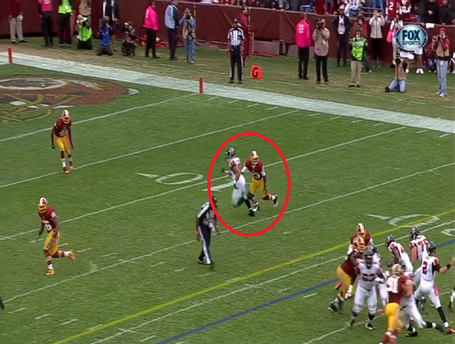 Gonzalez is allowed to run through DeAngelo Hall's zone, who is focused on watching the quarterback. 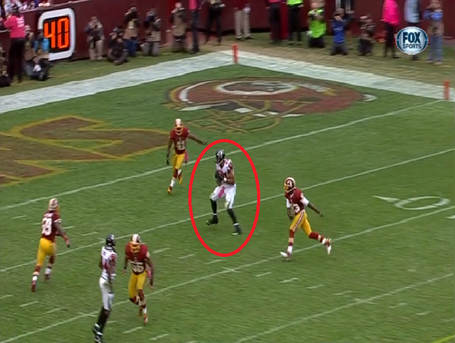 Gonzalez sits down in a hole between different zones. Matt Ryan easily finds him for a completion, and Gonzalez nearly takes it to the house for six.

With the issues we'd had in the secondary, we simply cannot afford to allow tight ends to beat us as well. Granted, we've played against some tough tight ends so far in Graham, Gresham and Gonzalez. But we have more top tight ends to come. The Vikings bring Kyle Rudolph to town on Sunday, while we have divisional opponents Brent Celek, Jason Witten and Martellus Bennet to play twice each this year.