Share All sharing options for: Flashback Friday: Redskins vs Giants

Each Friday Hogs Haven will travel back in time to recap a previous game against this weeks current Redskins opponent.

On September 19, 1999 the Redskins and Giants faced off in an early season NFC East battle on a beautiful fall afternoon that was perfect football weather. Unfortunately the game had to be played in one of the armpits of NFL stadiums, The Meadowlands. Of course the other armpit of the NFL back then was Veterans Stadium…what disgustingly vial places. Ok, I’m getting off track here, back to the game.

The Redskins were coming off an opening day heart-breaking loss to the Cowboys during which the Skins blew a 21 point lead. But, the Redskins showed no ill effects from the Cowboy game. In fact, the Redskins came out looking like the 2011 Packers did last night…the Skins were firing on all cylinders. The Redskins led 21-0 after the first quarter, 33-14 at halftime and 43-13 after the third quarter. The Redskins truly took the Giants to the woodshed for an ass-beating on this day. Final score: Redskins 50 Giants 21.

Defensively the stars were Shawn Barber, Matt Stevens, Kenard Lang and Darryl Pounds. Barber and Stevens had interceptions with Barber returning his 70 yards for a TD. Lang and Pounds added sacks.

By the end of the game Casey Weldon was taking a knee in the victory formation and the Redskins had scored the most points in an away game in the history of the franchise. The 1999 Redskins squad would go on to win the NFC East, the last Redskins team to do so.

I don’t know about you, but I’m ready for some football. 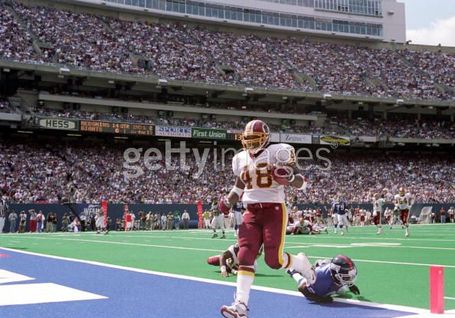