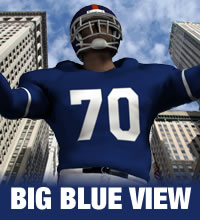 Ed Valentine, the lead Editor for the Giants' SB Nation website, Big Blue View, answered some questions I had regarding the state of the Giants' defensive and offensive lines, what Redskin he would want most for his team, and a prediction.

1. Of all the injuries the Giants have had so far, which two have you most concerned and what matchups do you expect the Redskins to exploit?

Well, the two injuries that hurt the most are the losses of the two defensive starters -- cornerback Terrell Thomas and middle linebacker Jonathan Goff -- to season-ending injuries. The Thomas injury, coupled with season-enders to reservers Brian Witherspoon and Bruce Johnson, and No. 1 pick Prince Amukamara's broken foot, leaves the Giants with questions at corner. Can Aaron Ross hold up as the starter? Can veteran Brian Williams still be effective in the nickel? As for middle linebacker, Wednesday was the first time rookie sixth-round pick Greg Jones ever practiced with the starters. The Redskins will test the corners, I'm sure, and try to find ways to trick Jones.

2. The Giants are notorious for drafting defensive linemen. What's the current state of the DLine with Cofield out and Osi on the temporary shelf?

The defensive line is one of the things I don't think Giants fans should worry about. Linval Joseph will do fine replacing Cofield, and veterans Rocky Bernard and Jimmy Kennedy provide depth there. It's a real bummer that second-round pick Marvin Austin will miss the season (torn pectoral), but the Giants will be fine if Joseph is as good as they think he is going to be. At the end, you have Justin Tuck and Jason Pierre-Paul, and JPP is about ready to bust out and become dominant. He was unblockable at times during the preseason, and if he can stay healthy I think people will realize by the end of the season that the Giants knew what they were doing not caving in to Umenyiora and his selfish contract demands.

3. For those who might not pay close attention to every move made by teams other than the Redskins, can you go through the key additions and subtractions to the Giants roster this season?

Additions: Center David Baas (from San Francisco) is really about the only name free agent, though they did also bring in cornerback Brian Williams from Atlanta. The Giants have 10 rookies on their roster, including four rookie linebackers. A lot of what you see will be familiar, but the 'under-belly' of the roster is much younger and more athletic than it has been in the past.

You will see a revamped offensive line with Baas at center, David Diehl moving from left tackle to guard and Will Beatty taking over at left tackle.

4. If you could take one player off the Redskins roster and put him in the Giants lineup, who would it be? Why?

Chris Cooley. With Boss defecting to the Oakland Raiders the Giants have a huge question mark at tight end. They have a three-headed situation with Travis Beckum as the guy they hope will become a reliable pass catcher and Jake Ballard and Bear Pascoe primarily as blockers. In the preseason one issue the Giants had offensively is lack of production from those guys in the passing game, and with Smith and Boss gone the Giants are looking for a tight end or slot receiver to emerge and help them control the middle of the field.

5. The Giants OLine is getting a lot of attention for being the oldest in the NFL with prior injuries? What are your thoughts on avoiding a Cowboys' collapse in that department? Is their depth there? I thought I read 3rd round pick Brewer isn't working out like expected.

Well, as I mentioned the Giants have revamped that line. Beatty has looked really good in preseason and if he can handle left tackle they will be fine. I didn't know anything about Baas when the Giants signed him, but this guy is a good player. He has a mean streak, he has picked up the offense quickly and he is a guy who can move and get out on the edge, which the Giants always like. They should be OK depth-wise, with Mitch Petrus, Kevin Boothe and long-time veteran Stacy Andrews. Brewer was a fourth-round pick, and he is a project. I don't know if he will make it, but the Giants weren't really expecting him to play this year, anyway.

21-20, Giants. I have to believe in my Giants, but it won't be easy. As a bonus answer to the bonus question I am going to guess that Devin Thomas -- who has been very impressive -- makes a big play in the return game to haunt his old team

Ah...twisting the knife with the Devin Thomas comment I see. A word of advice for someone who had excessive hope in that guy, don't hold your breath.