Share All sharing options for: Film Breakdown of the Redskins 1st half Defense compared to 2nd half Defense

The Redskins defence was almost night and day from the 1st half to the 2nd half.  In the 1st half, we had constant pressure on Kolb, the Cards run game wasn't going anywhere, and WR's weren't getting enough time to get open.  Yet, in the 2nd half, it was completely the opposite.  Kolb had all the time in the world, he always had a WR open, and that damn draw play seemed to get us every time.  Here's why.

We clearly went into the game with a blitz heavy and often game-plan.  To do this, you have to have CB's on the outside that can play man coverage, because the LB's will be blitzing and can't cover a zone in the middle of the field.  Lets have a look at a couple of plays on the Cards first possession. 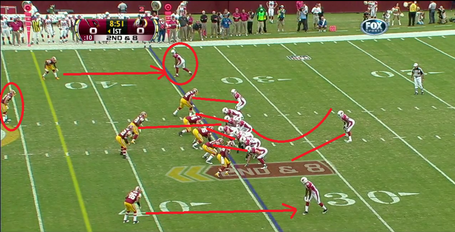 2nd and 8 for the Cardinals.  They actually try a play we're all very familiar with, a play-action bootleg off a stretch run. We actually only send 5 men on a blitz, but the advantage of the 3-4 is its harder to pick which 5 men.  In this case, its Kerrigan and Fletcher.  We can see here that on the outside we have both of their WR's in man coverage with our CB's.  I've circled Fitzgerald at the top of the picture, who has Hall covering him. You'll see Reed Doughty the SS (Strong Safety) in the other red circle.  You'll see that he's reading what he thinks the play is going to be.  He's starts rushing to the line to help when he thinks its a run, but quickly realises he's meant to be covering over the top of Hall on Fitzgerald.  This is exactly what the Cardinal's would have been looking for and what play-action is meant to do, drawing in the SS only to throw over the top of him. It left Hall one-on-one with Larry Fitzgerald, probably the best WR in the league. 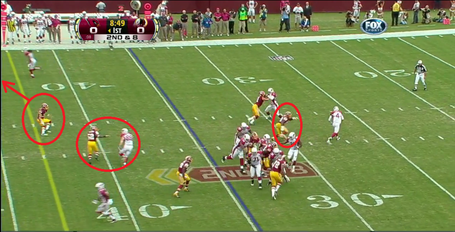 Fletcher reads the play beautifully, not being fooled by the play-action and goes straight for Kolb.  You can see that Doughty is caught out of position here and is just planting his foot to try and get back to help Hall.  Rocky does a nice job of picking up the TE on his crossing route, while both Hall and Wilson still have their cushion on their receivers.  Kolb has a face full of London Fletcher coming out of the play-fake. Because we're in man coverage, and the routes of the WR's are deep routes, there's not enough time for anyone to get open before Fletcher gets to Kolb, so Kolb is forced to throw it away.

The very next play, 3rd and 8, we send another blitz, playing man coverage again.  Barnes is in as the 3rd CB, and we have a single deep safety. It's again a look the Cards would have liked.  They would like the idea of Fitzgerald one-on-one outside against Hall again, but we put our trust in our ability to man cover long enough for the blitz package to pressure Kolb. 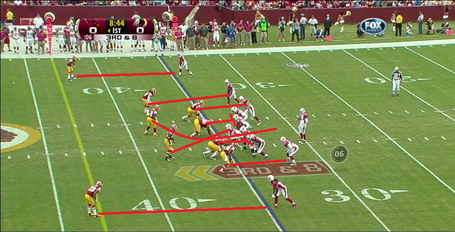 We only send 4 men on the rush, but we use Cofield to take the RG and RT blocks, Bowen occupies the LG and LT. We also use a common blitz technique that involves sending both middle LB's, Rocky McIntosh and Fletcher on a cross pattern.  McIntosh comes in at an angle and attacks the Center, pushing him wide of the LG.  Bowen manages to hold the LG off for long enough to make a big hole for Fletcher to blitz through. 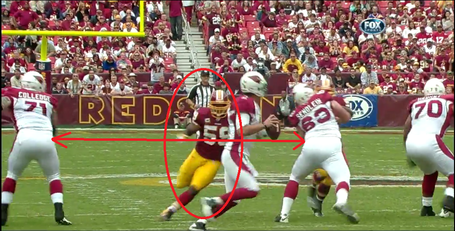 You can see there the good few yards gap between the Center and LG for Fletcher to run into.  A very well executed blitz package that again forces a quick throw.  The other thing to note on this play is that Kolb knew pressure was coming and had a hot read.  The WR at the top of the screen was running an 'in' route, as was the WR Barnes was covering, which was the intended receiver on the throw.  In the end, the rushed throw was off target and Barnes nearly intercepted it.  It's the type of play DeAngelo Hall makes his living from.  Hall is at his best when he has an 8-10 yard cushion (by cushion, I mean the gap between a WR and the corresponding CB) and can read the QB's eyes, and jump a hot route when the pressure forces a quick throw.  That would have been partically a reason the Cards sent Fitzgerald on intermediate to deep routes quite often, so avoid Hall breaking on a rushed throw.

These two plays set the tone for the first half.  Kolb under pressure, solid man coverage and rushed throws.  Hall managed to keep Fitzgerald relatively quiet in the first half while in man coverage.  So what changed in the second half? We lost both Josh Wilson and Kevin Barnes, our 2nd and 3rd CB's, to injury, forcing Byron Westbrook and Brandyn Thompson, our 4th and 5th CB's onto the field.  The Cardinals called an excellent game offensively from this point, and there was little we could do about it.  They took advantage of Wilson and Barnes being out and forced Westbrook and Thompson on the field by using 4/5 WR formations.  We didn't want to match up Westbrook and Thompson on the Cards 2nd and 3rd WR's, so we changed to zone coverage.

Zone coverage works well when blitzes rush the QB.  But because the Cards had 4/5 WR's on the field, we had to take out LB's that were previously blitzing to get DB's on the field to cover.  Zone defences can have holes in them where the WR's can attack, and a good QB with time to throw should pick apart a zone coverage, which is what Kolb did.

This is the first play after Barnes went down injured. 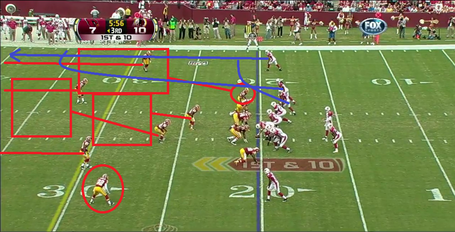 There's a lot going on in this picture, so let me explain.  In the red are our defenders dropping into coverage.  A red box is a zone that they are covering.  The blue lines are the WR's routes.  The coverage we have is 3 deep zones. Hall drops back to cover the third at the top of the screen. Doughty drops to cover the middle of the field, and Atogwe drops to cover the lower third of the screen.  Then we have the intermediate zones with Fletcher dropping to cover the center of the field, with McIntosh covering the middle of the field before the first down marker.  Westbrook drops back to his zone after faking a blitz.

The Cardinals play this zone beautifully.  They send the WR at the top of the screen on a 'go' route and they send a receiver on a quick out.  This forces Hall to follow the deep route through his zone, or the deep throw is wide open.  It also puts Westbrook in a tough position to be ready to come up and make a tackle on the quick out route to stop him getting a first down.  This extends the hole in the coverage between Westbrook's and Hall's zones, which is exactly where they send Fitzgerald. 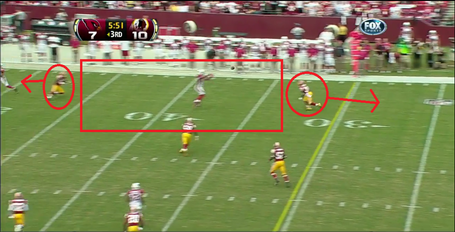 You can see the man that Hall had to stay will on the go route, making the gap between zones even bigger. Fitzgerald has a huge area to be wide open in, as you can see in the red box, and nobody on the defence has necessarily done anything wrong in coverage.  The Cardinals we're brilliant with their play-calling and we had to keep trying different zones to avoid matching up Westbrook and Thompson in man coverage.

Then came the massively annoying draw play.  A draw play is when the QB drops back acting like he will pass, delaying a bit before handing off to the RB.  It was fantastic play-calling, they spread us out, had us worried about covering zones, and then delayed a hand-off, making us think they were passing again before the RB would run into miles of space.  Lets have a look at one play. 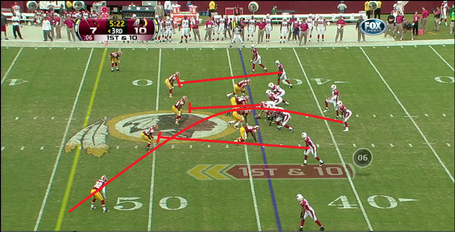 The Oline is key to a draw play.  They need to drop back like they are pass-protecting.  They do so here, and let the Dline rush right past the RB. 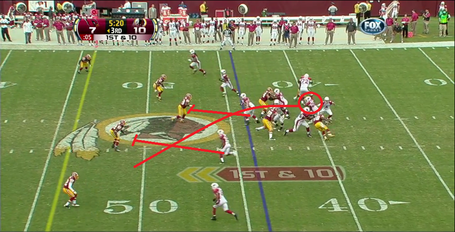 The Center does a nice job of delaying before getting out to the second level and getting a key block on Fletcher.  The rest of the Oline let the Dline rush past Beanie Wells, who follows the Center out of the pocket before doing a great job of cutting outside. 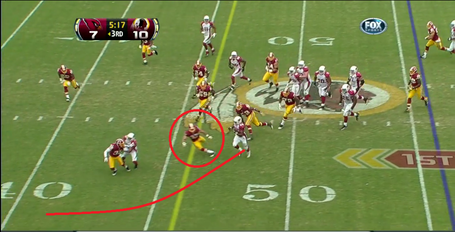 Doughty probably should have made a tackle here, but came in too fast at a bad angle and Wells managed to avoid him before being pushed out of bounds for a 20 yard gain.

It was two key elements of using 4/5 WR sets to force us into zone coverage and then running draw plays when we had less LBs/Dlinemen to stop the run that made our defence seemingly night and day between the 1st and 2nd half.  Eventually Barnes came back on the field, and we went back to man coverage and blitz packages, forcing the Cardinals to bring in more protection for Kolb and less WR's to manipulate zone coverages.