Share All sharing options for: Film Breakdown on Ryan Kerrigan and Initial Game Thoughts for Week 2

I'm back from my vacation from Florida, and just about over my jet-lag.  So how about some breakdowns?

Who would have thought it way back in April, the Redskins are 2-0!  It was a much closer game than it should have been given our first half performance (we'll look at why later in the week with the main breakdown).  But we came away with the win, which is what matters in the end. Here's some of the things that stick out in my memory from week 2 against the Cardinals.

A huge positive for this team is Ryan Kerrigan is improving, and at a fantastic rate.  Lets have a look at his sack yesterday. 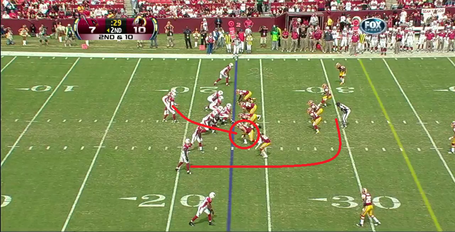 It's second and 10, 29 seconds left in the half.  Kerrigan gets a one-on-one with RT Brandon Keith.  Kolb has 4 reads to get through, the one highlighted, the 10 yard 'in' route, is his "hot read", meaning, if Kolb has a big blitz coming, or feels under pressure, the "hot read" instantly becomes his first target, because he is the most likely to get open quickly. 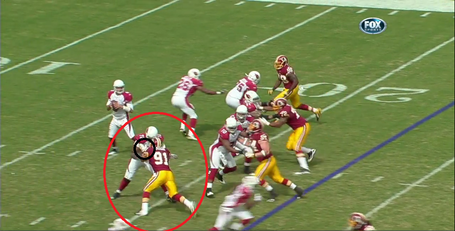 As Kerrigan initiates contact, you can see just how low he gets on Keith.  His shoulder pad level is the same level as Keith's chest.  When watching offensive and defensive lines at work, you'll notice the player who gets lowest will win the battle because they can get under the opposing player and push them whatever way they want to.  Another thing to take note of is Kerrigans' hand placement, which is circled in black. It's exactly where a coach would tell a pass-rusher to get his hands, on the chest, but close to under the shoulder.  With these two key pieces of technique from Kerrigan, he's able to push the Tackle back with a bull-rush move. 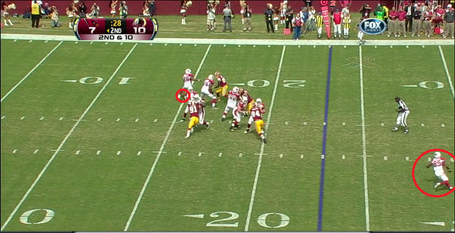 Kolb see's that Kerrigan has the advantage on Keith, and decides that the pressure is too much, and to check down to his hot read.  You can see in the picture above Kolb actually starts to wind-up to throw as the receiver comes out of his break. But as you can see here: 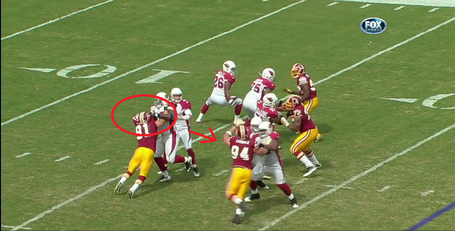 Kerrigan has pushed the Tackle back too far for Kolb to get a clean throw off without his arm/the ball hitting the Tackle, thus forcing Kolb to step up in the pocket.  However, by stepping up in the pocket, Kolb gives Kerrigan an open shot at him.  Kerrigan takes full advantage by getting off Keith with ease, and wrapping up Kolb before he can get his throw off.  This excellent technique was a joy to see, and I'll bet nobody is happier than Brian Orakpo.  If Kerrigan keeps improving at this rate, teams are going to have to start focusing some attention on him, and off Orakpo. Looks like these two have an exciting future ahead.

Another thing I noticed while watching the game was that Jabar Gaffney is one of our best off-season acquisitions. He runs very good routes, catches the ball well and adds some height to the receiving core.  Having a legit receiver opposite Santana Moss really helps the passing game for Grossman.  Gaffney has benefited from the defense sliding attention to Moss, but after yesterdays game, defenses will have to account for him as well.  The two plays that stick out in my mind were back to back in the first quarter, right before Grossman's second interception.  The first catch was on a 3rd and 2, Gaffney ran a comeback route and made a good catch out of his break for 8 yards and a first down.  The very next play, was a play-action pass.  Gaffney found a hole in the zone defense and made the catch for a 22 yard gain and another first down.  He and Fred Davis particularly impresses me when we needed to move the chains or make a big play.

Davis is finally getting his chance that we've all been hoping for, and showing why we wanted him to get that opportunity in the first place.  He's a big target and huge red-zone threat, something we desperately need. He's also extremely hard to bring down after the catch.  He and Cooley proved big miss-matches for the opposition to have to deal with.  Both have the receiving skills to get open against an outside linebacker, but both have the strength to break a tackle from a defensive back, so the defense will constantly have to know who exactly is on each man.

The play I'll look at is the 40 yard pass in the 3rd quarter to Davis when we were backed up at our own 10.  Its a very good play call by Kyle Shanahan, as everyone is expecting a run play, but instead we run a play-action bootleg. 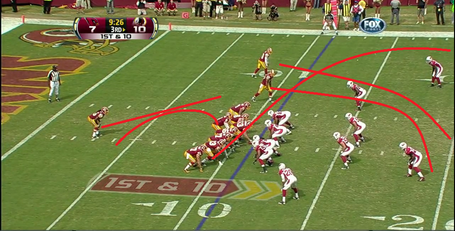 This isn't an ordinary Bootleg call.  Most would have a TE to slip out of the fake block and get open underneath for the QB to checkdown to if neither Gaffney or Moss get open downfield.  But on this play, the TE Davis continues on his run block fake, making the defense think he's role in the play is to block.  However, once the defense starts to change direction when they realise its a pass, he gets to the sideline and upfield. 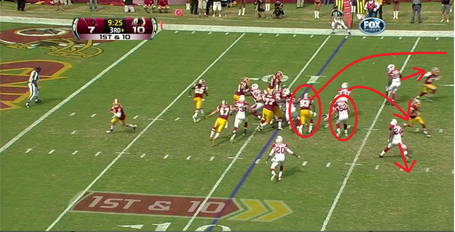 You can see here that the defense is starting to change direction to cover the crossing routes by Gaffney and Moss. The only man that recognises Davis's route is circled in red, number 52.  But as I said earlier, Davis's athleticism creates a match-up problem for the defense. Davis just out runs number 52 who isn't quick enough to make a play. 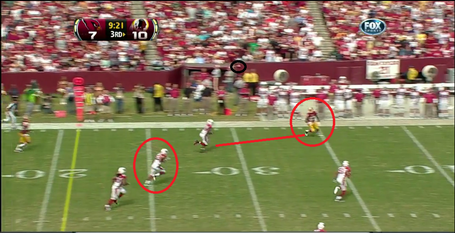 The Cardinals number 52 is circled in red, you can see just how quick Davis is to get that much of a gap.  The excellence in this play is getting the defense to constantly change direction.  At first the defense moves to the far side of that picture as it attempts to swarm to the ball to stuff the run.  With Gaffney and Moss running back against the flow of the defense, they become the most obvious targets once the defense realises that Rex is bootlegging. Nearly the whole defense then has to run back the near side of the picture to help cover Gaffney and Moss.  All the while, Davis gets up the far sideline unnoticed, and is wide open when Grossman passes to him.  This again forces the defense to change direction yet again to go and make a tackle and stop Davis from scoring.

But the only problem I have on this play brings me onto my final thought.  Grossman really doesn't have the strongest arm.  You can see from that picture, Davis actually had to stop to catch the under-thrown ball.  Grossman really needed another 5 yards or so to hit Davis in stride, then he would have had a significantly bigger gain.  I think the safety would have caught him up eventually, but a good throw turns a 40 yard gain into a potential 50-60 yard gain.

Grossman all game seemed to just lack a bit of zip behind his throws, not just on the deep passes.  On a lot of intermediate throws, the ball just appears to come out lofty, making it easier to intercept.  I cant be too critical of Rex, because he's won the first two games.  But its just something I've noticed over these first two weeks, and something I will keep an eye on throughout the season.