Brian Orakpo Adds MMA to Pass Rushing Arsenal - Is it Enough Though?

Share All sharing options for: Brian Orakpo Adds MMA to Pass Rushing Arsenal - Is it Enough Though?

Daniel Shiferaw has been a staple at Redskins training camp all month for SB Nation DC, and he was able to score some nice time with 3rd-year stud, Brian Orakpo. In his article today, there's some of the same verbiage I remember hearing from the offense during Zorn's second year "I'm a lot more comfortable this year...That's one thing that the second year always does with players -- [being] able to get more comfortable in [the scheme]." More interesting is Rak's take on his rushing technique, which has been a large concern for me some time (see picture to the right). It seems at least once a game there's an image of Rak in some variation of this pose and nothing changes game in and game out. How does #98 plan to fix that?

"[I did] some boxing and MMA type stuff," Orakpo explains. "[I learned] better technique as far as getting to the passer, and [this season] I can transfer it on the field...That [criticism of  one move] is non-sense," he says calmly. "I just go out there and play my game. If that's one move and they can't stop it, then so be it. I'm not really a guy that's going to have a whole huge arsenal of moves. I just kind of keep it real simple and just try to play my game."

In Rak's 2009 rookie year, fans, myself included, all consistently screamed for the refs to throw the flag screaming "hold!!!" His second year with the same holding like outcome, fans still protest for the flag, yet the yellow laundry rarely came out. The truth of the matter is something needs to change with Rak's rushing and maybe the MMA will be a difference. The MMA training certainly helped Andre Carter, which is why he's getting such rave reviews in New England. I interviewed Charles Mann last year and specifically asked the Ring of Famer about Orakpo's rushing technique:

"Nobody's got moves anymore. They just try to run around the corner and lower than the linemen and beat him around the corner. I would come out and first of all dig up my films and show them moves and see actual pass rush moves and demonstrate those moves in a 3/4 speed setting and show them how to rush the passer. And the speed rush is one move, but you should have three or four others. Combinations of moves you have. I don't see a swim, a rip, a club, a hump move (like Reggie White had - nobody can do that). I don't see any of those moves. Spin moves like my man in Indy [Freeney]. " 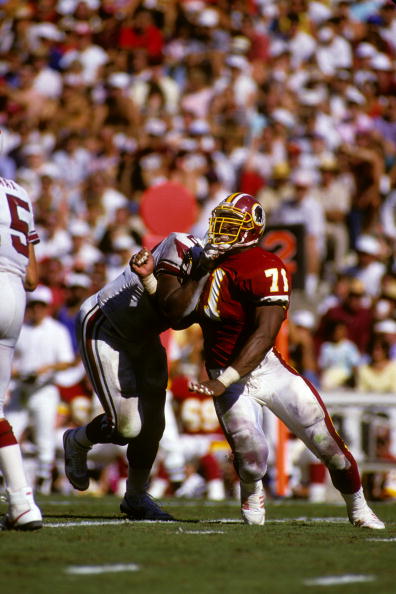 I am not going to pretend to be some film expert on pass rushing, but based on this picture of Charles Mann and any rushing clip of Clay Matthews, it's clear their techniques are better. Matthews certainly has better agility and a lower center of gravity, which prevents a Tackle from getting the rusher pushed upright like Rak seems to so often.

There's no doubt in anyone's mind that Orakpo can be the top pass rusher in the NFL. We can blame the front three last year to some degree, but Rak needs to change up his style as well. I do think the MMA will help. Take a look at this sensational pass rush by Clay Matthews. Right as Matthews was getting held upright, he was able to use his hands to break free and chase down Corn on the Kolb. Is this the future for #98? I feel sorry for opposing QBs if so.