Share All sharing options for: Fixing the Redskins One Draft Pick at a Time by Doug Farrar

Note: This Doug Farrar article was suppose to run in our 2011 Maple Street Press Redskins Annual, which sadly got cancelled due to lockout time constraints. Doug Farrar is a Senior Writer for Football Outsiders, an NFL Writer for Yahoo! Sports, and an NFL Columnist for the Washington Post. All the quality you expect including play diagrams included. This article was written in late June. Enjoy.

It was thought that when Mike Shanahan and Bruce Allen took over before the 2010, there would be a change in view to a more draft-predominant mindset, but the trade for Donovan McNabb meant that the new regime had to wave good-bye to two second-day picks in 2010. Perhaps conditioned by the fact that the McNabb trade has been somewhat disastrous to date (Allen's June, 2011 contention that he'd make the deal all over again notwithstanding), Shanahan and Allen went into the 2011 draft convinced that the best way to build their team was through the selection process. Thus, the first Redskins draft with a pick in every round since the 2000 season.

When the new front office was done with a draft that concluded with 12 overall picks (as many as in the previous two years combined), several key issues had been addressed in a way that should give fans a great deal of hope. For once, the ‘Skins aren't impulse-buying; they're addressing roster holes the right way, and several of the players taken could provide immediate dividends.

Why the 3-4 Failed, and what Ryan Kerrigan can do about it 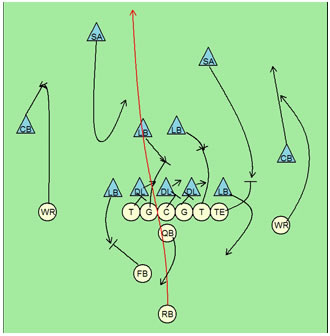 One of the primary problems with Washington's new defense was that by way of inside pursuit in the 4-2 nickel, and the slide attack with the 5-2 fronts, the Redskins were often vulnerable to any coordinated blocking attack. This was never more obvious than in the Philadelphia Eagles' 59-28 drubbing of the ‘Skins in Week 10 at FedEx Field. Michael Vick had the historic performance, but the Redskins' run defense reached a season's nadir, giving up a total of 260 yards on the ground, including 109 rushing yards on just 11 carries to reserve back Jerome Harrison. In this game, we saw many of the issues that caused the Redskins to finish in the bottom quarter of the NFL in percentage of rushing yards allowed that came 10 or more yards beyond the line of scrimmage.

Harrison's 50-yard touchdown with 2:10 left in the first quarter of that game was a prime example of what went wrong with the fronts. The Eagles ranked 10th in Football Outsiders' Offensive Adjusted Line Yards metrics, but what Washington gave up on this play and others was more about the porous nature of their own run-stopping efforts.

The Washington line had two primary problems against the run, and you can see the first in Fig.1 - a tendency to roll along with slide protection, leaving the front for and front five very vulnerable to influence blocking, cutbacks, and misdirection. With the Eagles' left guard and right tackle heading to the second level to take the linebackers against Washington's 5-2 front, it was up to Harrison to hit the gap, which he had the acceleration and opportunity to do.

The killer on the play was that when right end Philip Daniels kicked inside and was blocked out of the guard gap, right outside linebacker Brian Orakpo vacated backside protection and was blocked out of the play by the fullback. And with the left guard taking right inside linebacker London Fletcher out by holding him up while Harrison went by, it was just a matter of beating the defensive backfield.

The more you see these types of plays, in which lanes are created by a lack of gap discipline as by effective opponent blocking, the more you understand why the Redskins drafted Purdue defensive end Ryan Kerrigan with the 16th overall selection in 2011.

After a 2010 season in which he put up 70 tackles, 26 tackles for loss, 12.5 sacks and five forced fumbles, Kerrigan started taking off weight and impressing in coverage drills as a 3-4 linebacker. And though teams didn't have a lot of footage of Kerrigan doing anything in five-man fronts (he would line up as a wide nine-tech end in the style of Kyle Vanden Bosch), but one of the thoughts behind the switch to 3-4 ‘backer was that his motor was better than his selection of hand moves and that it would be wiser to get him outside the tackles, where he could use his speed and quick turn at the edge to harass quarterbacks on a regular basis. And at the Senior Bowl, Kerrigan didn't just dominate on the edge; he also showed enough when dropping back for several 3-4 teams to start talking with him seriously. 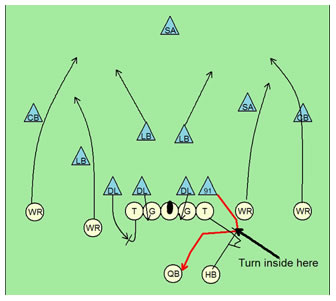 But the sack Kerrigan put up at the Senior Bowl showed a player who will do just about anything to get to the quarterback from any position - in this case, Kerrigan took TCU's Andy Dalton down near the end of the first half of the game by pinballing off Louisville running back Bilal Powell and Arkansas right tackle DeMarcus Love.

On the play, the South Team set up in a four-receiver set, with the North defense lining up in a 4-2-5 nickel (wide linebacker on the slot), not unlike the ones Haslett runs At the snap, Kerrigan (who was lined up just outside Love, a player he had abused during practice week) blew past Love's outside arc and actually took the block from Powell. Spinning off Powell took Kerrigan back inside the pocket, out of Love's area, and right into Dalton's face.

Kerrigan comes into the NFL with a proven ability to mess up enemy offenses as a 4-3 end, but if he can add the attributes common to 3-4 outside linebackers at the professional level, he could become the kind of indispensable defender necessary for any team to thrive on that side of the ball. And Kerrigan doing so in tandem with Brian Orakpo might give Washington that sack duo they've been craving for years - adding the discipline needed to contain the run as well.

Success can come in bunches

The Redskins have tried to find the kind of receiver required by every successful West Coast Offense - a big, strong pass-catcher with route integrity who doesn't fear traffic, can keep drives moving, and will make big gains after the catch. The Cerrato "administration" swung and missed with Malcolm Kelly and Devin Thomas, leaving Anthony Armstrong as the team leader in Football Outsiders' efficiency rankings, and Santana Moss as an oft-miscast possession receiver when no other could be found. This was crushingly obvious on one particular play in that same loss to the Eagles. 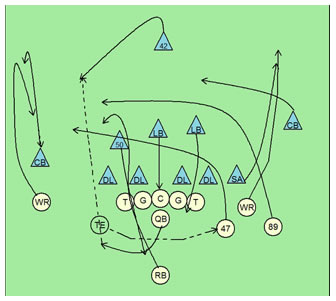 Washington had third-and-4 at its own 32-yard line with 9:04 left in the first quarter. The offense went twins right, which turned into bunch right when Chris Cooley motioned from left to right. As Cooley ran a drag route and Moss ran a deeper cross, Eagled linebacker Ernie Sims blitzed through leaky protection to harass McNabb and force him to his left. When McNabb did throw, Cooley was out of the window, Moss wasn't set yet, and the ball was tipped and deflected to safety Kurt Coleman for an interception.

Mike Shanahan called an above-average number of bunch plays in 2010 - these are plays in which receivers set up in a triangle formation on either side of the line. The idea is to provide quick clearing/crossing routes so that the quarterback can make instant reads and make consistent completions, but two things are required to make bunch formations work in the NFL - the aforementioned receivers who are route-accurate and tough over the middle, and the kind of protection that allows those types of reads. We know that the ‘Skins are still trying to find the cured to the protection problems, but they might have found the answer to their possession receiver worries in the person of Miami's Leonard Hankerson, selected in the third round with the 79th overall pick.

Not only did Hankerson display a consistent ability to split and beat zone coverage (in contrast to his reputation as a "possession: -- i.e., "slower" receiver) at Miami; he also made plays over the middle over and over during his time as a member of the Hurricanes' receiver corps. One of three touchdowns he scored against Clemson in Week 4 of the 2010 season was a great example. This play came with 14 seconds left in the first half, and Miami already up, 20-14. Miami went with a trips left (trips formations are basically elongated bunch looks) to promote the same kind of clearing concept in the red zone. 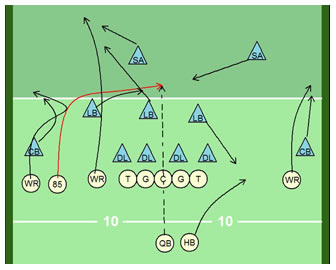 At the snap, the slot receiver headed upfield, taking the middle linebacker and the strong safety out of the read to Hankerson, who ran a perfect crossing route just inside the end zone. Since the slot route affected coverage, the strong-side linebacker was forced to cover Hankerson, which was not an optimal situation for the defender.

Hankerson has drawn comparisons to Sidney Rice of the Minnesota Vikings and Andre Johnson of the Houston Texans, but one similar receiver to keep in mind is Rod Smith, who was the dominant receiver for Shanahan's Super Bowl teams in Denver.

The impressive depth of the Redskins' 2011 draft - at least on paper - is that nearly everyone on the list can make an immediate contribution. Second-round defensive tackle Jarvis Jenkins from Clemson is an ideal five-technique (3-4 defensive end) prospect who may replace Kendrick Gholston right from the start at the right defensive end position. He can also kick inside to tackle in the nickel fronts Haslett will probably still have to run more often than he wants to because of his specific personnel.

Nebraska's Roy Helu, Jr. is like Hankerson in one way - he's deceptively fast and mislabeled as a player. Just as Hankerson has been saddled with the "possession receiver" tag, Helu was thought to be a traditional I-back because he's a bigger player (6-foot-0, 220 pounds), but he ran a 4.4 40-yard dash at the 2011 scouting combine, and he's really more of a one-cut-and-go back. Shanahan proved with Peyton Hillis in Denver that he could think outside the box with I-backs, and it's entirely possible that Helu might be the sleeper of this entire draft class. Helu scored 28 rushing touchdowns on just 522 carries in his collegiate career, so he's definitely going to get looks as a red-zone threat.

Not only does each player stand to make a difference, but it's the overriding draft-first philosophy that should be encouraging to Redskins fans. This is the first time in the Snyder ownership era that the personnel mindset has run this way - most would say it's past time for that to happen.