Since we're one day away from the Colts/Redskins game (HAIL YEAH!), I emailed Brad Wells, the site editor for SB Nation's Colts' website, Stampede Blue.

1.) With Manning on the PUP list, what QBs will we likely see (1st team, 2nd team, etc). Nate Davis, Dan Orlovsky, and Mike Hartline...should we expect an ugly game?

My goodness! How could you forget Curtis Painter! He's our secret weapon. You see, what the Colts do is they usually have Painter work with the first team while Peyton is out. This way, when he throws all the INTs that he normally throws, it gives our offensive players an excuse to hit your defensive players while they are attempting to return the INTs for TDs. Ingenious plan, yes?

In all seriousness, Painter will work with the first unit, Orlovsky the second, and Hartline the third. The Colts cut Davis a few days ago.

(Note: I had mixed that up. It was Nate Davis that was cut, but about 1 millions Colts fan tweeted to Jim Irsay to dump Painter).

2.) Colts drafted 2 O-Linemen with their first two picks to booster an aging and banged up OLine. How are Anthony Castonzo and Benjamin Ijalana developing? What's the outlook on the OLine for 2011?

They both look good, though I think in 2011 (barring injury) Castonzo will start and Ijalana will play as the back-up RT.

3.) With the 4th round pick, the Colts took 'Cuse RB Delone Carter. Will he see a lot of action and what's the running game looking like this year? Still Addai?

Addai is still the starter. Carter should see a ton of work on goal-line and short yardage situations.

4.) What matchups are you looking forward to against the Skins? Any names we should look out for?

Staying with the o-line theme, I'm interested to see how the Colts line matches up against the Skins front. I personally think the Skins will have a good pass rush in 2011, and I'd like to see how someone like Castonzo blocks a guy like Orakpo or Kerrigan.

5.) In Vegas two weekends ago I put $300 on the Colts under at 10.5 games. With Peyton's papier-mâché neck and 29th ranked rushing offense, that's a decent bet, right?

Yeah. I think this is a 14 win team if it stay healthy. Reality though is it won't stay healthy, and as a result I say 11 games.

I was about twelve 7 and 7's down when I made this bet. I still feel good about it except for the fact the Colts have a pretty favorable schedule (Panthers, Titans x2, Jags x2, CLE, CIN).

I emailed back to Brad:

It's so great Painter's QB rating in 2009 was 9.8, didn't play last year, and then had a horrible 1st pre-season game. How is he #2 on the depth chart??? Irsay should make Peyton Manning the first QB in NFL history to wear the Chris Samuels-style neck pad. 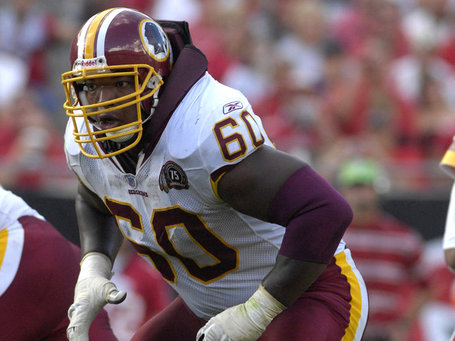