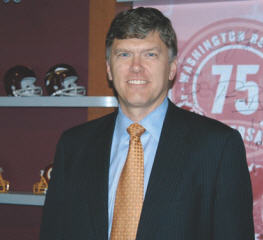 "Even though he is returning to the law firm where he worked prior to joining the team, he will continue to consult with the Redskins as he did prior to joining the organization," Snyder said in a statement. "We look forward to continuing our relationship with him and wish him the best of luck in his new position."

Ken and I ran into Donovan several times at Fedex Field. I saw him doing quality control different times in the red lots, upper deck, and even lower level concourses. I respected Donovan for that. The fact a suit would put in that much effort to help fix the bad wrap the Redskins fan experience has had over the years sat well with me. In addition, during the debacle of the Redskins 2009 season, from Ticketgate to Swinging Gate to the sign bans, Donovan was the only person in the Redskins front office that had the nads to speak to the media. Cerrato and Karl Swanson went in hiding like usual.

The move definitely took me by surprise since why do it now and not after the 2010 season? Regardless, best of luck, Dave.