Share All sharing options for: Donovan McNabb Works Out With Philadelphia Eagles, Says He's In Shape

Just a day after his statement to prove his doubters wrong was released, Donovan McNabb was seen working out with his former teammates of the Philadelphia Eagles, according to WPVI's Mark Meany.

This is the second team McNabb has worked out for in the offseason, both of which are not being the Redskins. McNabb was also sighted throwing to Arizona Cardinals receivers near his home in Phoenix.

After the workout, McNabb wanted to talk about his shape, not the Redskins, according to Dave Zangaro of CSNPhilly:

"I’m just working out right now," McNabb said when asked about his future. "As you can see, I’m in some great shape and I’m only gonna get better." 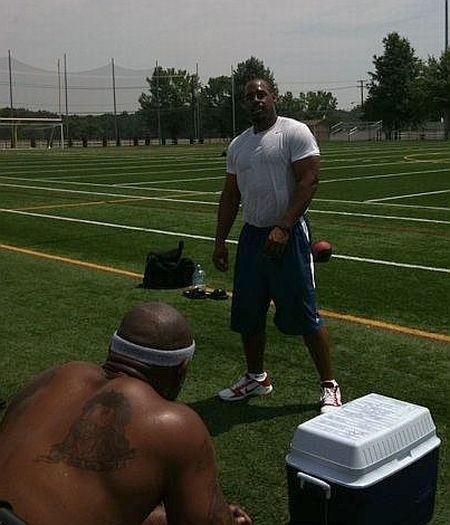 (Photo via Mark Meany of WPIV, via Twitter, of an in-shape McNabb)

All of this of course continues the theme that has persisted over the last six to seven months, the one in which it's quite clear that McNabb will not return to the Redskins once the lockout ends.

That being said, this really doesn't appear to be a big deal. Justin Tryon was in town last week for the Redskins workouts, does that mean he is a traitor to the Colts? Of course not. If it weren't McNabb in this situation, no one would care.

It wouldn't be surprising if Mike or Kyle Shanahan aren't bothered one bit by this.