Today I am happy to bring you the 18th round selection in the 1965 NFL Draft. Chris Hanburger, aka "The Hangman", on account of his clothesline tackling technique, was considered one of the best outside linebackers of his era. He made nine Pro Bowls and was regularly named to the annual All-Pro team. He called the game on defense for legendary coach George Allen and was legitimately feared by opponents. He was as smart as he was tenacious. He also started in 135 straight games.

Chris Hanburger was announced as a member of the Hall of Fame Class of 2011 this past winter. I thin it is also interesting that he went to the University of North Carolina. There is a certain OLB prospect out of UNC that both Kevin and I would love to see the Redskins land if they make a selection at #10 overall. On the year that one of the best outside linebackers to ever wear the burgundy and gold gets a bust in Canton, wouldn't it be something if we went back to the well and brought in Robert Quinn?

P.S. We are closing in on the end of this series of draft-related pieces, and for some it can't come soon enough. It seems at least one commenter has become troubled with what seems like Vinny-bashing in this space. Let me assure you all that I am as tired of talking about Cerrato as you are about hearing it. I can assure you all that the last thing we want to do is pile up on Vinny. But in this series of draft busts and successes, his name just keeps coming up. Hmmm...

Although to be fair, today's post really offers no logical tie to the former shadowy overlord of our front office.

On a totally separate subject, Vinny Cerrato should be charged with assault for what he did to our franchise. In fact, I don't need a draft-related series of posts as an excuse to condemn in the strongest possible terms the decisions and actions of a man who, despite my own lack of experience at any level of professional football, I am comfortable calling a total joke. In the words of John Paul Jones, "I have not yet begun to pile on."

Check out this Hangman cartoon done by the very talented Ben Ceccarelli, aka @Piketoon): 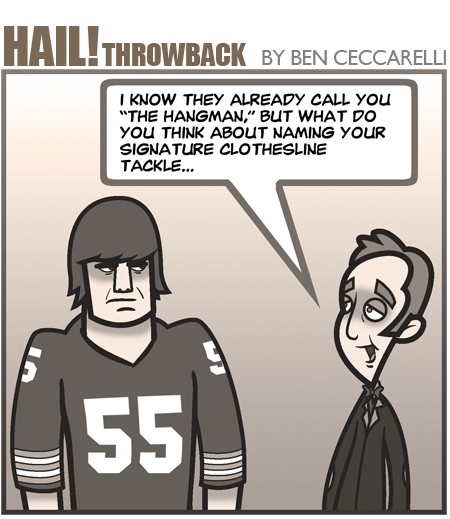 Click the image for the rest of the cartoon strip (via redskinsblog.com).

Are You Smarter Than The Experts?
Correctly predict the first 32 picks of the 2011 NFL Draft and you’ll win $10,000,000!
BEST ROUND EVER IN PRIMETIME
Enter at facebook.com/BudLight
Here We Go