5 Reasons Why the Redskins Should (Definitely) Draft Tyron Smith

Share All sharing options for: 5 Reasons Why the Redskins Should (Definitely) Draft Tyron Smith

I said I was going to make it a draft/CBA-free week, and I was so damn close.  Well, last night I received an email asking if I wanted to pick for the Redskins at #10 in quite the interesting cast of GMs. People who picked before me include Jim Wyatt, Woody Paige, Darin Gantt, and several other major, big-named beat writers. The players already selected before me (in no particular order) were Marcell Dareus, Von Miller, Robert Quinn, Nick Fairley, Blaine Gabbert, Cam Newton, AJ Green, Prince Amukamara, and Patrick Peterson. I wasted no time drafting Tyron Smith with the following explanation:

1.) The Redskins currently have zero, active Right Tackles. Both Stephon Heyer and Jammal Brown are free agents who have very concerning deficiencies: Heyer has never shown consistency, and Jammal Brown has lingering injuries, not to mention  the freedom to play where ever he wants now. Why stay here?

3.) It's no secret: There are no stud QBs in this draft.  I forget what commenter said it, but if Andrew Luck had come out, would Gabbert, Cam, or Locker be in any of these discussions for top 15? NO (save Cam). The lack of talent at QB makes the others look better. None of these QBs can start day 1, and the Redskins have too many holes to use a 1st round pick on a guy that will sit all year one. Shanahan is smarter than that, but his red herring terd droppings to the media machine fool us otherwise (not really).

4.) Redskins ranked 31st in NFL running behind the Right Tackle in 2010. Check out this stats image after the jump. The majority of the Redskins rushing attempts were to the outside. Does that speak more on Shanahan's style or lack of faith between the Guards? Probably both. Most of the other NFL teams rushing attempts were 3x as much up the middle than the sides. Tyron would be a huge asset for the running game, and thus Rex. 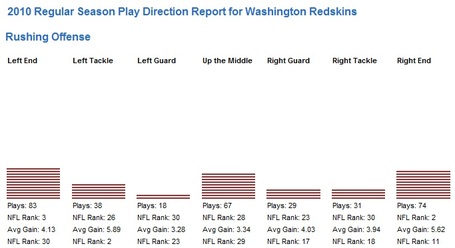 The Skins were a top 3 rushing offense outside the Tackles.

5.) Book-end Tackles for 10 years. There's no point of drafting a QB if you can't protect him. Build the infrastructure so he (or she) can succeed when he does start games inexperienced.

Now, would I be ecstatic if the Redskins drafted Cam Jordan here instead? Of course, but all these recent quotes of Shanahan verbalizing interest in QB is nothing more then a ploy to boost our trade position to trade back. If teams know we want a QB, and Gabbert, Cam, and Locker all fall to 10, which they will....who looks good now? Oh crap, doesn't that really help Dallas' position to trade back?

Note: This is not meant to be a "ONLY BUILD THE OLINE AND WIN LIKE THE HOGS."....I believe this kid can produce more than all of the other options.

Dan Kadar: It's certainly a unique pick. I don't think anyone anywhere has projected the Redskins to taking a right tackle 10th, but your logic is sound. People, myself included, look at Smith and simply expect him to move to the left side based on his athleticism. Because of that, he's never thought of as a Redskins target and no other offensive tackle is worth that pick. Had Smith gone back to USC, everyone thinks he would have blossomed into a top five pick for the 2012 NFL Draft. So him landing in picks nine (Dallas) to 22 (Indianapolis) is the expectation for 2011. To go with Smith 10th, given who is gone, is a shrewd move. At the least, it's smarter than me thinking Julio Jones will be the pick. In this year's draft, there is depth at pass rusher and wide receiver. Those spots could be found in later rounds.