Potential Jobs for Redskins Players During the Lockout

Share All sharing options for: Potential Jobs for Redskins Players During the Lockout

In our Pickled Hogs live podcast last week, one of the things we punched around was potential jobs for Redskins players during the lockout. Feel free to add your own in the comments and I'll bump the best ones up to the main page.

Carlos Rogers could work at a hands free carwash because he may be effective at his job if he doesn't need to use his hands.

Laron Landry could be a flexing consultant on the international body-building tour...where he'll specialize in 2nd and 3rd place celebrations.

Carriker/Daniels/Sellers could start a repo business...people will turn over their keys and crap their pants when these guys come knocking.

Haynesworth: We could park him off the West Coast as a human tsunami blocker. But after thinking about it, it occurs to me that if he fell, he could actually cause a tsunami himself. Damn...

Carlos Rogers could work at the DMV...he already knows how to annoy the crap out of me on Sundays. This way he could do it from 9 to 5 during the week.

Rex Grossman: Congress...If Heath Shuler taught us anything, it is that questionable Quarterback skills makes for a good Congressman.

Kory Lichtensteiger could be a crossing guard since he's already qualified at letting people go by.

Brain Orakpo could launch a career being the movie preview voice guy. (Listen to this clip and try to disagree).

Carlos Rogers could have a Reality TV show working in the Seattle fish market as a catcher. 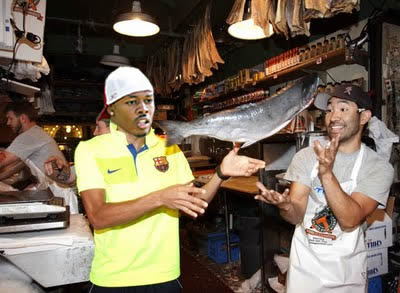