Share All sharing options for: Film Breakdown of 'An Intricate Look into Kyle Shanahan's Play Call vs Dallas'

On Wednesday, Kevin posted his daily slop feature containing an excellent piece in the Washington Post by Barry Svrluga. If you missed that, I strongly urge you to go check it out here (if you don't, this post will be largely pointless to you).

What I thought I'd do is show you guys exactly what they are talking about in visual form (I'm only going to show the touchdown play, because the coverage of the other one was too poor to get much from).

Svrluga explains each component of the play call, but just to remind you about the key parts. 'North Right Clamp' signals for the Tight End (Fred Davis) to line up on the right side of the line, with the Z receiver (Anthony Armstrong) staying in close to the formation running a 'Bingo' route (a 10-12 yard crossing/in route). 'X Corner Post' tells the X receiver (Jabar Gaffney) to run what looks like a 'Corner' route, but then breaks back inside as a 'Post' route. Here's what it all looks like on the field. 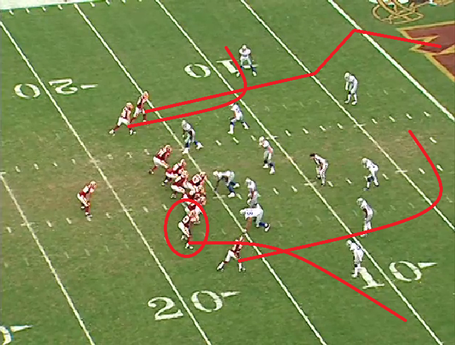 I've circled Davis in red. He lines up to the right with the Z receiver Armstrong. We have David Anderson lined up in the slot running the 'Choice' route (a 5 yard quick out route). You can also see Gaffney's 'Corner Post' route. As Svrluga explains, in the previous game against Dallas, the Cowboys matched up man to man, allowing the X receiver (Terrence Austin was the X on that occasion) to get one-on-one on a 'Corner' route. Kyle Shanahan and Rex Grossman we worried about the look they got here though. 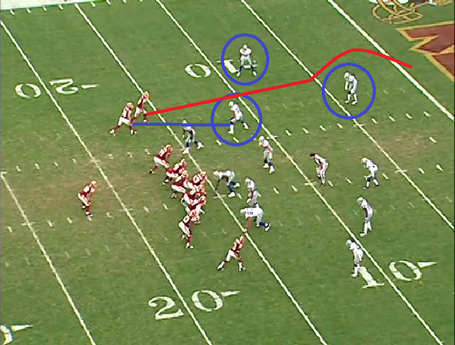 The Cowboys had a cornerback, Orlando Scandrick, lined up with Anderson in the slot, leaving Gaffney potentially double-covered deep (assuming it's man coverage). Grossman said in the piece he was either going to Gaffney for the touchdown, or throwing it away. 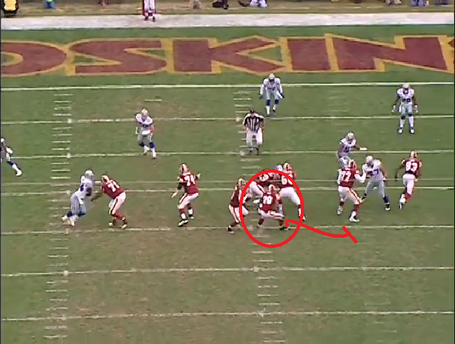 As Grossman drops back, we see the other part of the play call 'H-2 Special' come into action. That part of the call tells the running back (Roy Helu) to stay in and protect. He performs what's called an 'inside-out technique'. This is when the back picks up the blitz to the inside first, but if it's not there, then checks for an outside blitz. 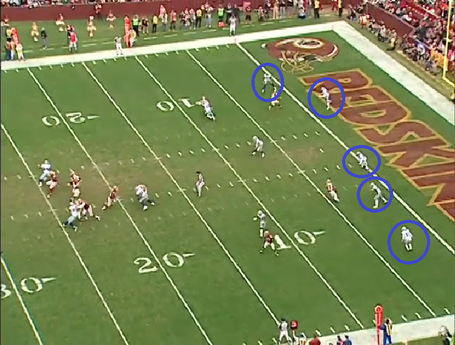 As it turns out, the Cowboys are running a form of deep zone coverage. That means Gaffney only has to beat safety Gerald Sensabaugh. 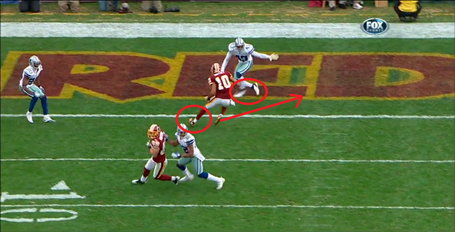 Gaffney shows off the extent of his veteran route running skills. He cuts out to fake the corner route and waits until Sensabaugh bites. As soon as Sensabaugh crosses his feet and directs his hips outside for the corner route, Gaffney plants his foot and cuts back inside on the post pattern. 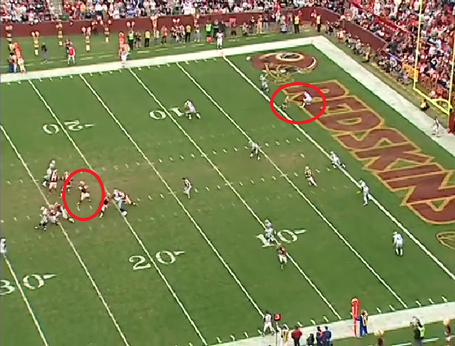 With a clean pocket, Grossman can just watch and wait for Sensabaugh to bite. As soon as Rex see's the feet cross and the hips turn outside, he goes to pull the trigger. 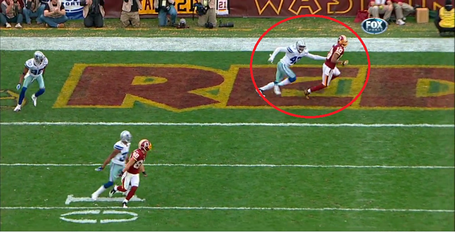 Gaffney 'crosses the face' of the safety Sensabaugh and gains a yard as Sensabaugh has to re-adjust his feet and hips to play catch up. 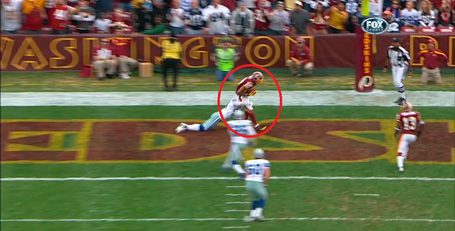 But Sensabaugh is too late. Grossman's pass is exactly on time and Gaffney pulls it in for a touchdown.

There you have it. North Right Clamp, H-2 Special, Z Bingo Choice, X Corner Post. Just felt like Svrluga's brilliant piece deserved to have the photo's to help demonstrate what was going on.