Here's another from our weekly installment of top 5 Redskins defensive plays. After such a loss to the Jets, I'll admit this was a very hard week to pick plays for. We came away without any sacks or INTs and generally lacked big plays. But after watching the game over and over, I think I've come up with 5 decent enough plays to make do for this week, so here it goes (in no particular order).

First up we have Perry Riley's tackle for a 1 yard loss on the Jets opening drive. 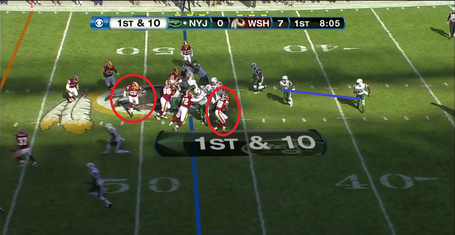 Jets took this play right out of Tim Tebow's Bronco playbook. It's an option pitch play. Brian Orakpo does a nice job setting the edge (he's getting better at it), forcing the Jets to take the option to pitch it outside. Also good to note exactly where Perry Riley is on this play in the other red circle. 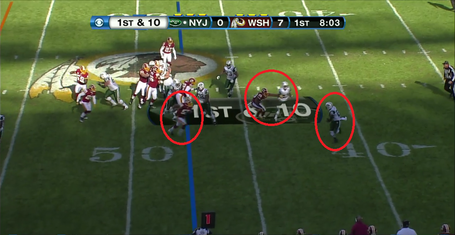 As the option runner receives the pitch, Riley passes the line of scrimmage unblocked. 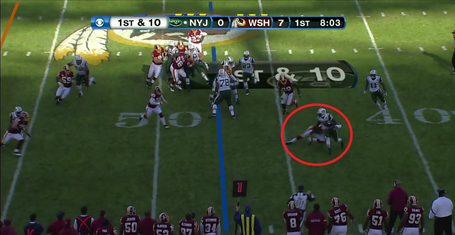 Riley dives at the runners feet, tripping him up behind the line of scrimmage. Unfortunately because Riley threw himself at the runners feet and only tripped him up, the runner manages to fall forward and only lose a yard on the play. Had Riley made a form tackle, Jets lose at least four yards.

Our next play is another tackle by Riley. This time on a 3rd and 3. 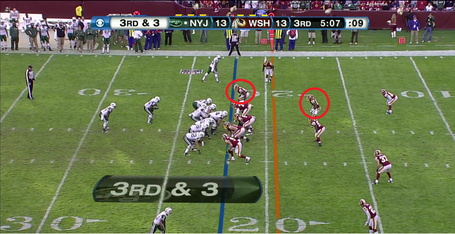 Orakpo and Riley are once again circled as they are both key components to this play. 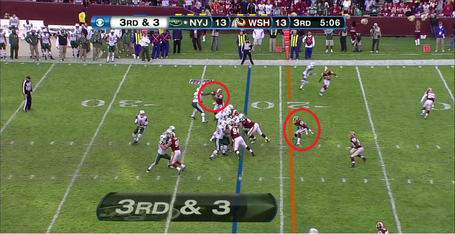 Mark Sanchez sells the play-action enough to get Riley to bite. Meanwhile Orakpo doesn't let Jets left tackle D'Brickashaw Ferguson lay a hand on him. Orakpo has said that he's not a 'move guy' and that he prefers to read and react to what the tackle is doing. On this occasion Ferguson over-steps to the outside. Orakpo brilliantly cuts back inside swatting down Ferguson's hands. 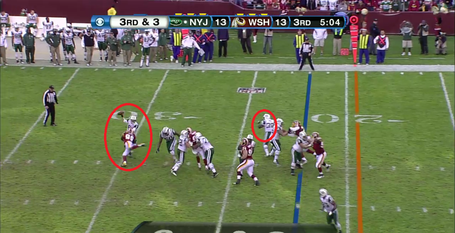 Sanchez feels the pressure from Orakpo and slides to his left. Orakpo makes a diving effort to bring down Sanchez, but can't quite get him. At this point, the full back John Connor slips out into the flat. 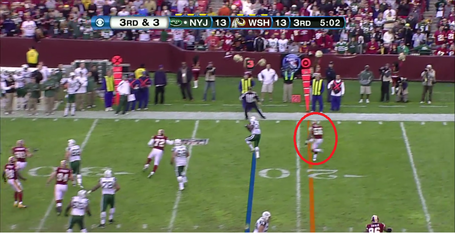 Riley comes up out of nowhere as Connor catches and secures the ball. 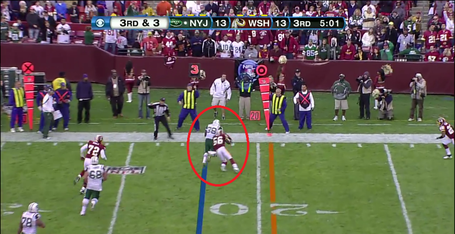 Riley uses his momentum to lay a strong shoulder hit on Connor, which pushes him over and stops him before he even gains a yard, let alone a first down! Again I can be picky about Riley's choice of tackle. I would prefer he made a form tackle, but he made a huge play so I have to hand it to him.

Now we have the first of Barry Cofield's two tipped passes. This man is a machine at tipping passes, constantly getting his arms up and annoying the hell out of opposition quarterbacks. 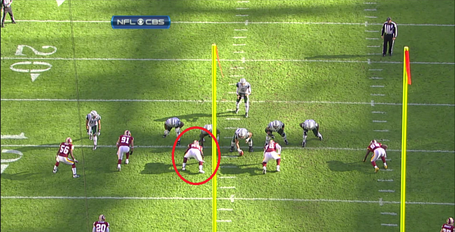 Cofield goes into beast mode on this play. 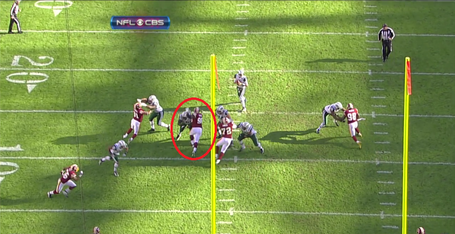 He uses a swim move to get past right guard Brandon Moore with ease. He then uses a spin move to get inside of center Nick Mangold. 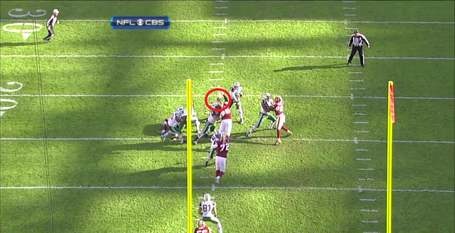 As he comes out of the spin move, Cofield sets his eyes on Sanchez. He see's Sanchez pulling the trigger and gets his arm up to try and block it. As it turns out it hits him in the helmet, but anything will do the job.

Then we have his second tipped pass. 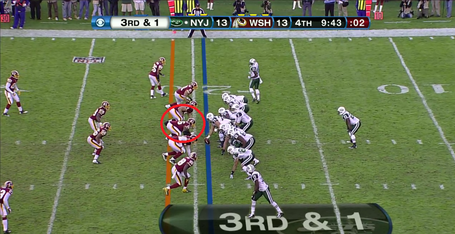 On this occasion, the Redskins are in a more traditional 3-4 set, with Cofield in at the nose tackle position lined up over the center. 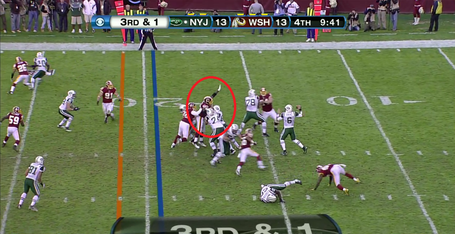 Cofield again takes on two blocks, all the while keeping eyes on Sanchez. Once he see's the arm go back, he jumps to try and get something in the way. 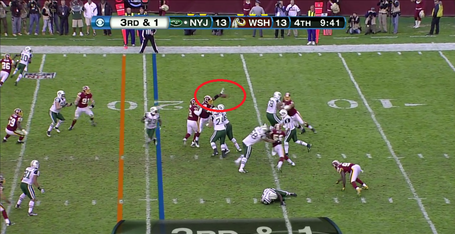 Once again Cofield gets his arm int he way. He blocks the pass on 3rd and 1 in the 4th quarter. That gets the defense off the field and gives the offense decent field position to mount a drive to try and take the lead. I can't wait to see Cofield next season after he's had a whole off-season to properly learn the nose tackle position. I think he'll put in the work it takes to be a great nose for our defense.

Our final play this week comes from none other than, London Fletcher. On the Jets opening drive he made an amazing goal line stop against Shonn Greene. 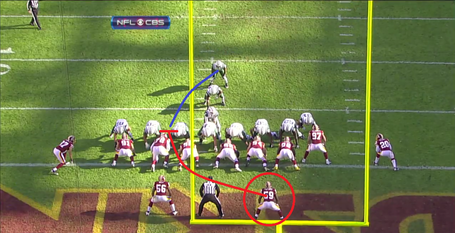 Quite a simple play. The offensive line is going to cut block to open a hole inside. It leaves Greene one on one with Fletcher. 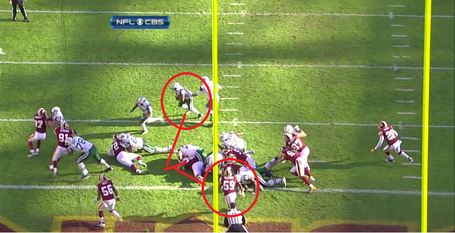 As Greene receives the hand-off, you can see the hole opened up for him by the cut blocks. 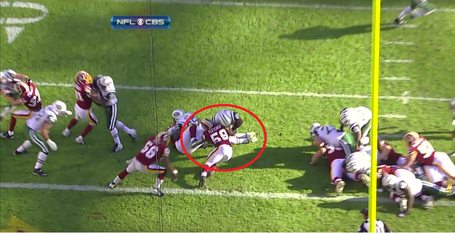 Fletcher throws everything he has into stopping Greene in his tracks. What these pictures don't show you is just how suddenly Greene stops. Usually when a back hits a linebacker, the back gets a half a yard from the point of contact. But on this play, Fletcher stops him exactly where he hits him, Greene didn't gain an inch on the play, let alone score a touchdown (although he did manage to score the next play...)

So there you have it, another top 5 Redskins defensive plays of the week.