Share All sharing options for: The Redskins 'Cornerback Blitz' Package.

Redskins defensive co-ordinator Jim Haslett likes his blitzes. We've already seen plenty of the Cover Zero defense called at key times this year. But another blitz that has come up consistently over the course of the season is the 'Cornerback Blitz'. Most commonly used with Kevin Barnes when he's lined up on top of the slot receiver. The Redskins ran is five times against the Jets on Sunday and came up with mixed results. The first resulted in a 5 yard completion for a first down, then we had a 7 yard completion on 2nd and 10 followed by an incomplete pass on the 3rd down. Barnes unnecessary roughness penalty came on the 4th time we ran it before Sanchez completed a 10 yard pass on 3rd and 4 for a 1st down on the last time we ran it.

Let's have a look at all of them. 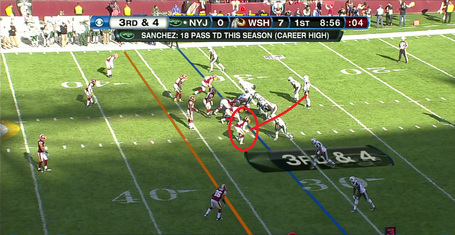 The basic concept for a cornerback blitz is that the corner in the slot blitzes, while a safety or a linebacker takes over his coverage responsibilities. Here we see Barnes in the red circle lined up over the slot receiver. 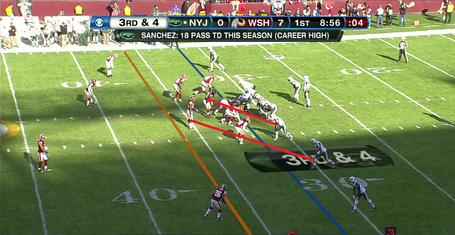 Now the slightly 'exotic' part of this blitz is that the Redskins keep safety Reed Doughty as over the top help rather than bring him down to cover one man. Instead they bring safety DeJon Gomes over to cover the middle of the three receivers, while linebacker London Fletcher comes across to cover the man lined up across from Barnes. This allows the Redskins to keep Doughty as over the top help in case either of those receivers are on deep routes and get a better jump than Gomes or Fletcher. 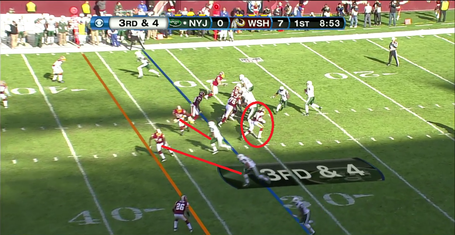 As Sanchez controls the ball from the snap, you can see Gomes and Fletcher drop back into coverage and Barnes speed ahead on the blitz. 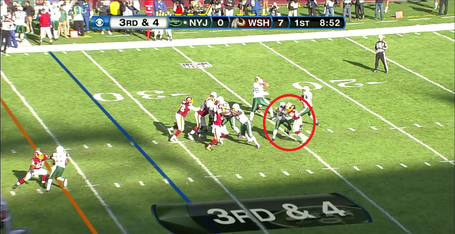 However, the running back identifies the blitz and puts a nice block on Barnes. Sanchez gets enough time from that block to get the throw off for a completion.

That was the only one we saw in the first half, so lets skip ahead to the 3rd quarter. 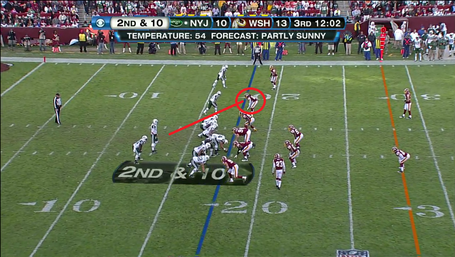 Barnes is lined up over the slot receiver. 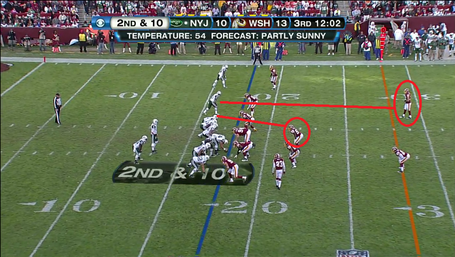 This is a much more conventional corner blitz. The safety (Doughty) is directly over the top of Barnes and takes the responsibility of the slot receiver, leaving Fletcher to take the tight end. 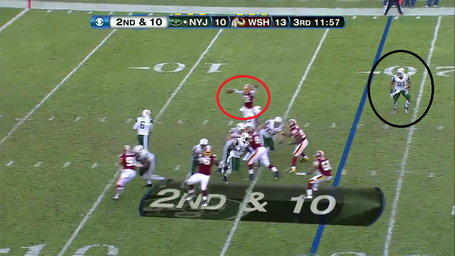 Now I'm guessing Mark Sanchez and the Jets saw this blitz coming. As soon as the ball is snapped, Sanchez looks to his hot read and throws over the blitzing Barnes before he can get within five yards of him. The tight end makes the catch and gets 7 yards on the play, setting up 3rd and 3.

So the Redskins send Barnes on a blitz on the very next play, just from the other side. 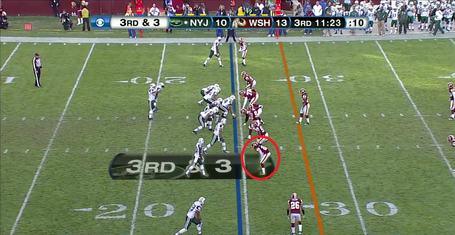 Once again we have Barnes lined up over the slot. 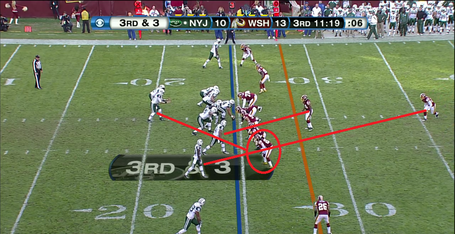 Barnes has a little tendency to slowly creep off his receiver to give him a extra step to get to the quarterback quicker. This is a dead give away for the blitz, but I don't think Sanchez saw it on this occasion. It's another slightly 'exotic' rotation of coverage. We have three safeties on the field; Gomes, Doughty and Oshiomogho Atogwe (never gets easier to spell).Gomes takes the inside man while Doughty comes across to pick up Barnes's man leaving Atogwe over the top. 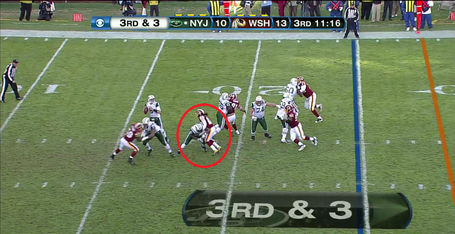 Once again the back comes across to pick up Barnes, but this time can only delay him rather than maintain a block. 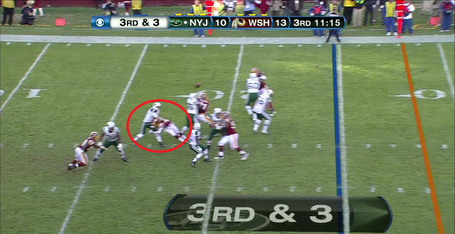 Barnes manages to disrupt the throw from Sanchez, not allowing him to fully step into the throw. 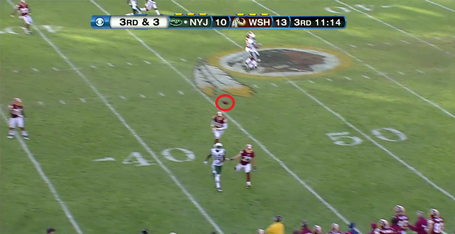 And the ball sails over the receivers head and out of bounds. The Redskins defense manage to get off the field on this one.

Then came the unnecessary roughness call. 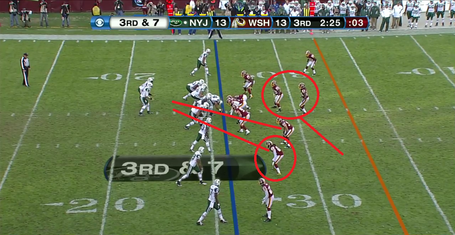 On this corner blitz, they bring Doughty down and let him blitz as well. Gomes and Fletcher once again drop back to pick up the coverage. 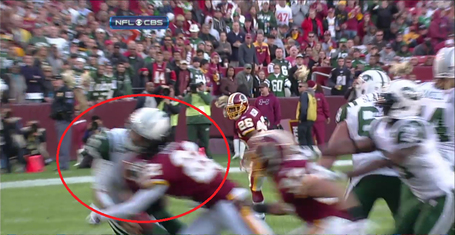 Barnes gets a free run and lays out Sanchez. It's a tough call. I heard the whistle go early, but that was on the TV. What did you guys hear in the stadium?

We end on the final corner blitz from Barnes. It came with 6:08 left on the clock and the Redskins trying to hold onto a 16-13 lead. 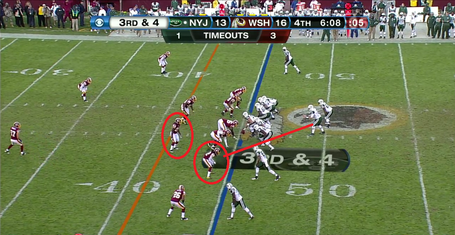 We can see Gomes is in as the 3rd safety, Barnes is send on the blitz while Gomes takes the coverage of the slot receiver. 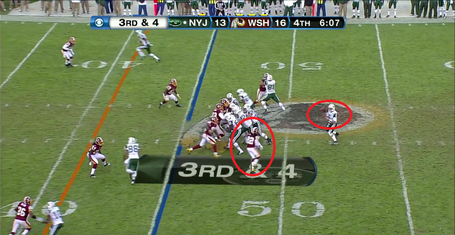 Barnes gets a free run at Sanchez, who throws a pump fake to try and delay Barnes slightly. Barnes hesitates slightly giving Sanchez time to look for another target. 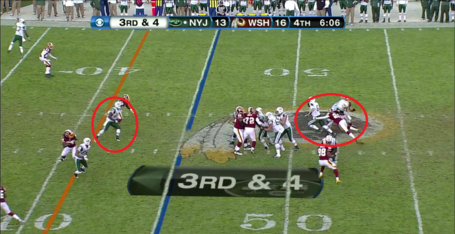 Sanchez starts to move up in the pocket to avoid the diving Barnes. Barnes can only get a hand on Sanchez, which isn't enough to stop him getting the ball off to the receiver. The catch is made and the Jets get a first down from 3rd and 4.

So that's a couple of different variations from the corner blitz package. What do you think of them? Also let me know what else you'd like to see broken down this week and maybe some potential top 5 defensive plays for tomorrow.