Share All sharing options for: Film analysis and breakdown of Willie Smith's performance against Jason Pierre-Paul and Jared Allen.

As we all know, the Redskins 4th overall pick of the 2010 NFL draft, Trent Williams, was suspended for the last 4 games due to a drugs violation. This left the Redskins to choose between Sean Locklear (who had previously stepped in at left tackle when Williams went down injured), and undrafted free agent tackle Willie Smith. Smith stepped in against the Patriots and kept the job against the Giants and most recently the Vikings. He was up against two of the leagues premier pass-rushers in Jason Pierre-Paul (JPP) and Jared Allen. So I went back and watched every offensive snap from those two games focusing only on Smith to see how he did. I noted down every good and every bad play. Here's how I felt he got on.

Vs the Giants and Jason Pierre-Paul.

+ 9:24: Delays Pierre-Paul's rush (although he slightly reaches for him), passes JPP on to Maurice Hurt and picks up a blitzing linebacker with a good punch.

+ 4:28: Gets to the second level. Good pad level on Kiwanuka. Pushes him back and outside to create a running lane. 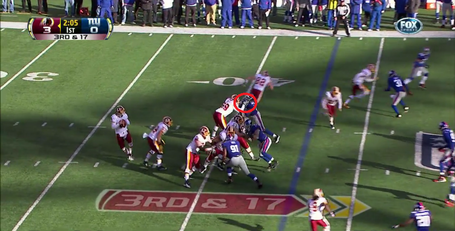 Gets a nice early punch. 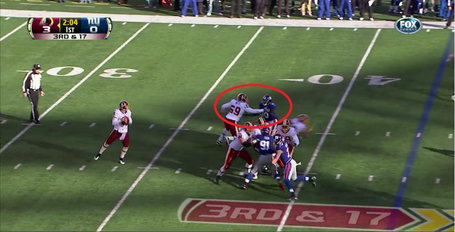 Always has a hand on him, keeping JPP in front of him at all times despite various attempts at cutting inside or club moves. 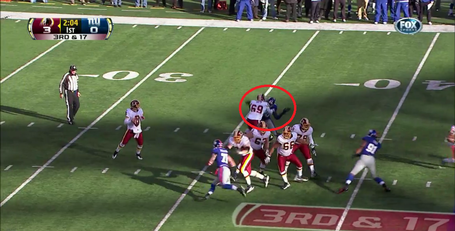 He mirrors every move JPP makes and stays with him well. One of Smith's best plays.

+ 15:00: Gets under the linebacker and forces him back, giving Darrel Young space to run into on 3rd and 1. 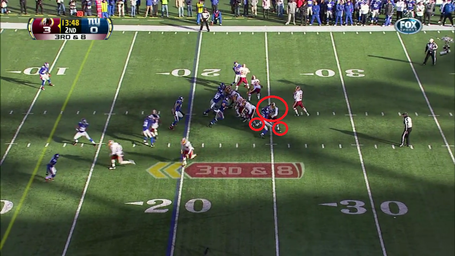 Smith is too high, allowing the linebacker to get under him and push him back and off balance (notice Smiths right foot is in the air). 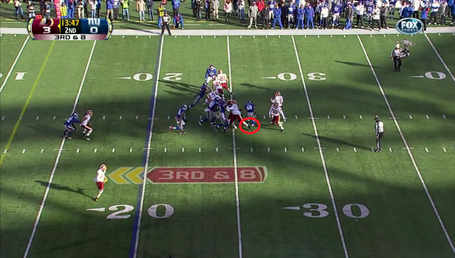 Smith gets lucky that the defender trips over Hurt's leg, which stops him from getting to Grossman (who throws a 20 yard TD to Moss).

+ 12:38: Seals off the backside of the run, then peels off and pushes Helu forward.

+ 9:55: Collapses the inside, creating a running lane.

+ 8:39: Pushes JPP inside onto Hurt, gets enough on the linebacker to push him wide of Rex.

+ 8:02: Lead blocks the linebacker, forces him inside to give Young a path to the end zone.

+ 1:56: Adjusts to inside move quickly, pushes him inside away from Rex. 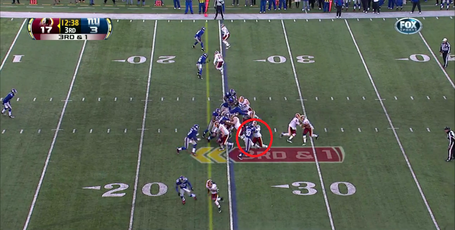 Gets pushed back off the snap. 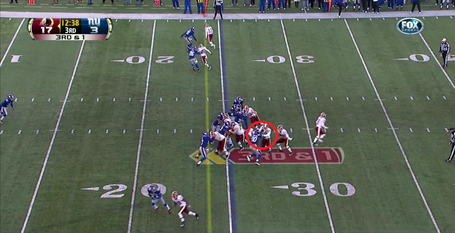 JPP gets command of the block. He sets the edge and forces the runner back inside. 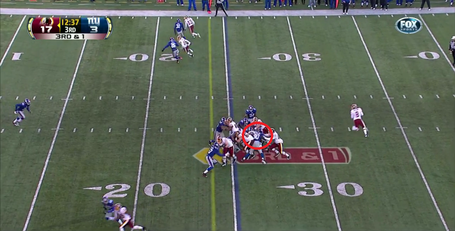 JPP then peels off easy and makes play inside.

- 1:28: Never fully engages JPP, lets him inside and JPP makes the play. 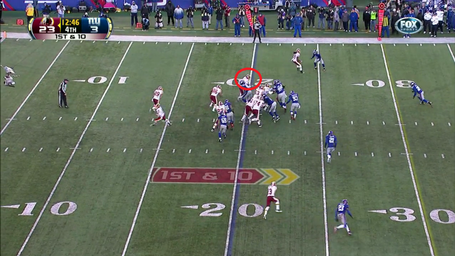 Gets out in space and identifies his block well. 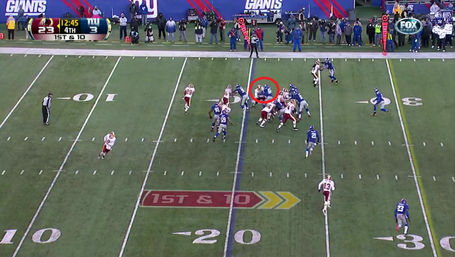 Smith takes a good angle and cuts off Kiwanuka from making a play.

- 7:31: Too high on Boley, who forces Rex into a rushed throw. But again gets away with it.

Vs the Vikings and Jared Allen 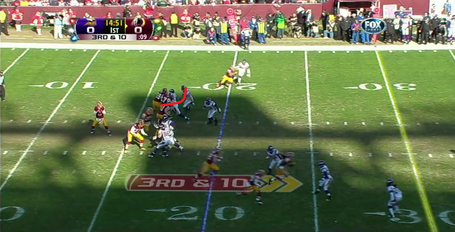 Allen and Kevin Williams run a DEX stunt which see's Allen come back inside. 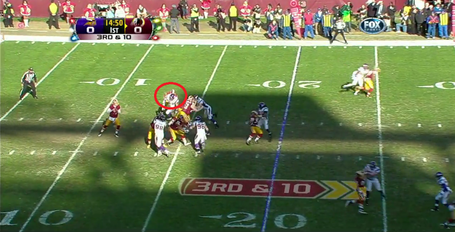 Smith late in recognising the stunt which allows Williams to get through. 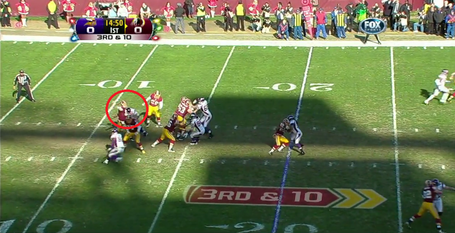 And allows a hit on Rex as he throws (for a big completion I might add).

+/- 14:13: Hold block enough if Royster continues to go outside rather than cut back.

+/- 7:11: Keeps Allen outside. Maintains his block but doesn't try to win it which allows Allen to get back inside to make a play.

+ 6:37: Trap block on Allen again, leaves another big hole behind him.

- 13:45: Didn't expect Guion on the DEX stunt. Gets pushed back but Royster avoids (good block by Hurt on the play). 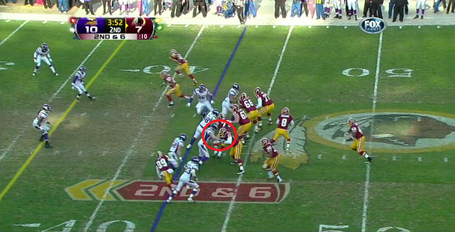 Smith reaches and hardly gets a hand on Allen's inside move. 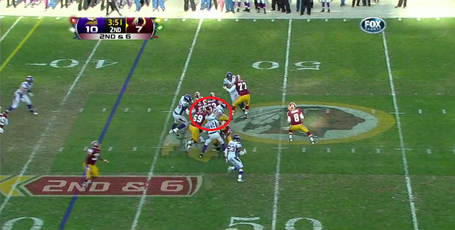 All Smith can do is try to take a holding penalty, but Allen is too far past. 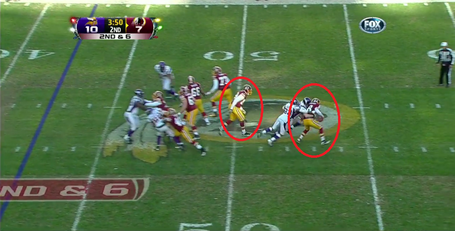 And that results in an all too familiar sight for Redskins fans. The quarterback fighting to hold onto the ball as he's being sacked while the offensive lineman is stood looking dumb-founded.

- 3:19: Allen beats him outside. Smith fails to initiate contact (possibly weary of the inside move that just beat him).

+ 2:00: Gets a nice punch that knocks Allen off balance and gives Smith the opportunity to run Allen past Rex.

+ 1:24: Good position, pushes the DT back and finishes well.

+/- 1:11: Starts to lose when Allen goes back inside, but recovers enough to allow Rex more time had he moved outisde the pocket.

+ 11:27: Keeps Allen in front of him even after Allen attempts to step inside. 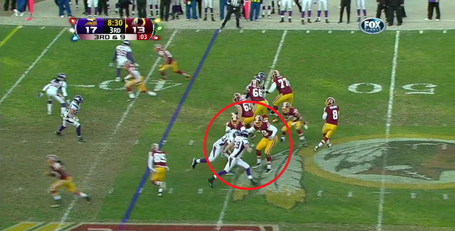 Gets back quickly and takes a good position that gives him the ability to take Williams or Allen. 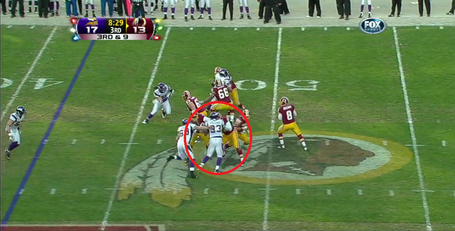 Smith takes on Williams on the DEX stunt early allowing Hurt to get into position to take Allen. 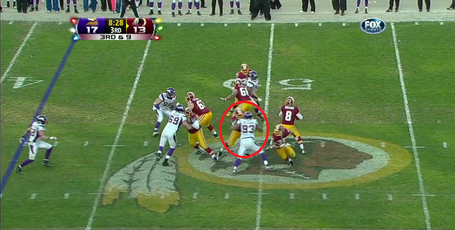 Smith then drives Williams past Grossman.

+ 7:51: Gets good position inside, keeping Allen outside at arms length on the run.

+ 6:39: Allows Allen outside and pushes him further out creating a throwing lane for Rex.

+ 1:54: Seals off back side of the line to allow Royster to cut back and make a big gain.

+ 0:38: Good position to cut off Allen outside rush. Forces Allen to re-think and go back inside.

- 13:31: Reaches with not footwork, results in missing Allen.

+ 9:29: Gets to the 2nd level and beats the linebacker pushing him to the ground.

+ 8:06: gets to the 2nd level and stops Greenway from getting to Banks on his TD play (that was called back for a penalty).

+ 7:43: Picks up the defensive tackle on the DEX stun and wins the block.

+/- 3:41: Too high but good position. Recovers well once Allen comes inside.

+ 2:52: Recognises DEX stunt early and has no problems dealing with it. 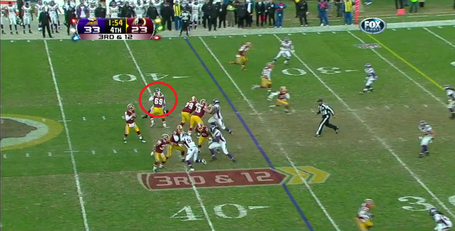 Smith matches Allen step for step on the rush as first contact is made. 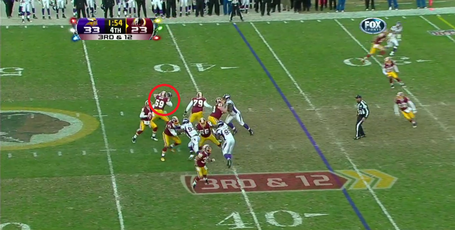 After initially being pushed back, Smith recovers to stop Allen in his tracks. 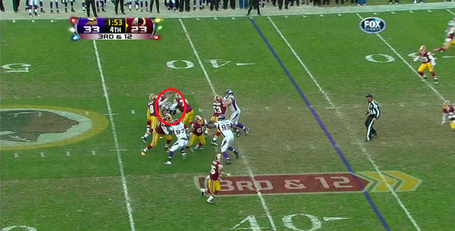 Allen is then pushed to the ground by Smith (Hurt helps keep him there) and Smith wins the block.

+ 0:55: Defensive tackle stunt, runs the tackle past Rex with ease.

Over the course of the 2 games, I counted 38 good plays and 24 bad plays by Smith. He started well against Pierre-Paul before trailing off in the second half. But oddly started poorly against Allen before a fantastic second half. Hopefully he can continue against the Eagles the way he finished the Vikings game. But he certainly has something to him. With an entire off-season of coaching and work in the weight room (anyone else think he looks thin for a tackle?) he could well be in a position to challenge Brown for the right tackle job. Not ready to commit to him as a starter yet, but he has definitely flashed signs of potential over these too games. Will be interesting to see how he fairs against Trent Cole and the Eagles because Cole is a very underrated pass-rusher.