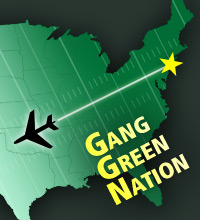 Our weekly Q&A with our SB Nation opponent. Thanks to John from Gang Green Nation:

1.) DHall said they believe that Sanchez can be pressured into mistakes. "He doesn't take as many chances as much as he just gets confused some times," Hall says. "A lot of times he just comes out and stares a receiver down, tries to throw him the ball. He puts it on those guys to make plays. They haven't made as many plays this year as they have in previous years."

Does that seem to be most teams game plan? Stack the box and force Sanchez to throw it? (as of last year he was a better QB vs the blitz statistically)

Gang Green Nation: I think Hall is right. A disturbing number of Sanchez's errors have been unforced. They just come from not reading coverages properly or staring down a receiver. Teams haven't really had to load the box against the Jets because they are throwing it more than they have in recent years. The personnel on the offensive line is different so they would be hard pressed to have the success running they did from 2008-2010. They are really a throw first team now, and that has not worked out.

I don't think the Jets have missed Brad Smith. Joe McKnight has been more productive as a return man. That has been a trend with the Jets. Special teams coach Mike Westhoff has some of the best blocking schemes in the game. The Jets have lost other good return men the past decade like Chad Morton, Justin Miller, and Leon Washington, and the return game seems to never miss a beat. They just plug in another fast guy.

Smith did other things. He was an excellent special teams coverage guy, but that has also been very good for the Jets this year. The Jets do not run the Wildcat much, but I think they could stick a guy like McKnight in that role and do it well. It seems more like a choice to go away from it.

Smith is a useful spare part, but you can find somebody to do everything he does for a lot cheaper than the $3.75 million salary he got.

3.) What's the fan sentiment on Sanchez? (Has he peaked? Would you rather have Tebow if a swap trade was hypothetically at end of year and Jets missed playoffs?)

Sanchez is very polarizing. There is a segment of the fan base who thinks he is not any good. There is also segment that blames the coaching more. I am sympathetic to the second group. Mainly, the offensive coordinator has been around since the days Chad Pennington and Brett Favre played quarterback, and he has only had one offense ranked in the top half of the league. I really question whether these guys know how to develop a quarterback.

This offense seems to be built around Sanchez's weaknesses. Rex Ryan wants the offense to not make mistakes so they run a bunch of short, timing routes. Sanchez isn't a precision passer. Defenders have been sitting on and jumping short routes all year. It also feels like they rely on gimmicks rather than teaching Sanchez how to play the position. Sanchez had a bad stretch a few years ago. They gave him a color coded system on when he should take chances relative to game situation. He was holding onto the ball too long this year. Instead of taking him through what he needs to do each play, they installed a buzzer in practice that went off if he held it too long. He was having trouble staring down receivers. They didn't go over what was going wrong. They had backup Mark Brunell (Yup, he's actually still in the league) take snaps with the first team.

Is Sanchez the answer? I can't say, but I don't think this is the right staff to tell us. It's not like Sanchez has been a complete bust. There are stretches where he looks great. I think a change is likely on the coaching staff because it's a lot easier to find a new coordinator than throw three years and tens of millions dollars of investment money down the drain and start back at square one.

I really would not want Tebow no matter what happens with Sanchez. I think a team that cannot make big plays in the passing game has a ceiling in the NFL and needs everything else to be perfect. I also think the way Denver is handling Tebow is really hiding him.

Ryan's job is not in jeopardy. He has bought himself a lot of time by making the AFC Championship Game his first two years. I think fans are going to be very restless, though, if he does not make some major changes to the offensive coaching staff.

Everything I read about the Redskins tells me this is going to be a much tougher game than a lot of Jets fans realize. Washington presents the Jets some matchup problems. They can bring pressure off the edge. Right tackle Wayne Hunter is shaky. A few early hits on Sanchez could rattle his fragile confidence even more. Tight end Fred Davis is a productive part of their passing game. The Jets can't cover tight ends. I think this is a game decided by a field goal with a break here or there deciding which team comes out on top.